Sony are just really good at making TV’s. That’s the takeaway from every Sony TV review I’ve ever conducted. The A9F, one of the company’s more recent OLED offerings, is a great example of this. It takes its technical cues from last year’s A8F and cherry-picks the best aesthetic choices from the premium A1 line. This allows the A9F to offer the best of both worlds without entering that ultra-spenno price tier.

4K OLED is already pretty bloody incredible, so it takes a great TV to really set it apart. Sony’s pitch for the A9F is the Pixel Contrast Booster, a new software-side solution that “widens the area of colour reproduction at high brightness.” This is a typically buzzwordy way to say “we played with the way contrast works and it makes the colours really pop.” It does though. The Battle of Crait on my 4K bluray copy of The Last Jedi has rarely looked so incredible, the splashes of red against the white salt flats really leaping off the screen.

PS4 and Xbox One games come up a treat as well, though turning off quite a few of the post-processing effects is recommended for best results. One benefit of the A9F for gamers, even over the A1, is that every HDMI port is 4K HDR10 compatible not just the ARC channel. You still have to go to the channel menu and switch on extra HDMI settings to fully unlock this functions (which I have and continue to think is a ridiculous thing to be burying in a nested menu). 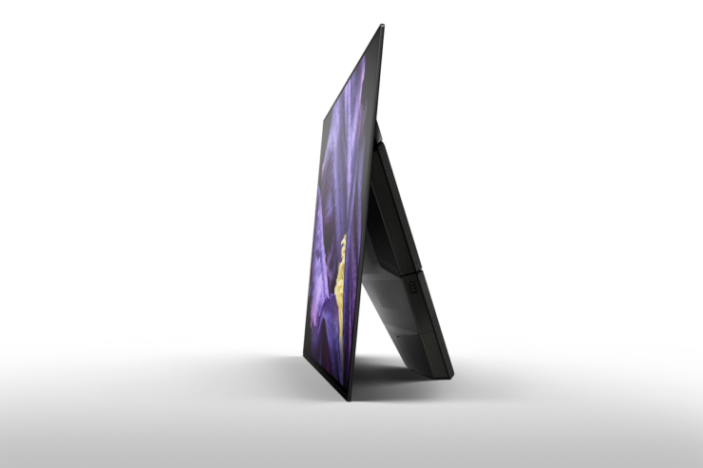 In 2019, it feels like most TV manufacturers consider sound to be a bit of an afterthought. Why go to the trouble of including premium audio when most will attach their new panels to a home theatre system the moment they get it out of the box? Sony have been trying to buck this trend for a while with their Acoustic Surface tech. While it’s met with varying degrees of success in other models, Sony seem to have gotten a handle on it in the A9F. Acoustic Surface Audio+ puts a pair of twin actuators that push sound through the screen without creating any wobble or vibration at higher volumes. It can also be configured as a centre speaker in any existing hi-fi set up which is an extremely neat feature. It’s really solid stuff and great for those that haven’t upgraded their sound system yet.

Sony have upgraded their Android TV software in 2019, complete with an overhauled user interface. It’s much clearer and easier to use than the old layout and seems to function a great deal more smoothly. Apps load quite a bit faster and I’ve seen fewer crashes and freezes while trying to jump between apps. Everything you expect from Smart TV functionality is represented: streaming apps like Netflix, Stan and YouTube,  Strong work and much appreciated.

If it ain’t broke

Designwise, the A9F follows the trend set by the more expensive A1 OLED. It places the panel itself directly on your entertainment unit and hides all of the cable ports and computational components in an angled prop at the rear of the screen. The prop is held down with a hefty counter weight that will keep it from shifting around, though it should be noted that the weight is substantially lighter than the A1. The forward-facing look is clean and elegant, one I’m glad Sony have kept. At the rear, I still think there’s some concessions to cable management that could be made — it can still be a bit difficult to plug HDMI cables in if you can’t actually get around the back of the unit.

The Sony A9F is a strong entry in an increasingly impressive product line. Every new unit seems to trade on the lessons of the last, something I wish more big box makers were doing. Its suite of features is impressive, it adopts some of the best notions of its higher-tier cousins and it creates an extremely beautiful 4K image. Well worth checking out if you’re in the market for a 55″ or 65″ panel.