Tech Review: We go hands on with the Microsoft Surface 3 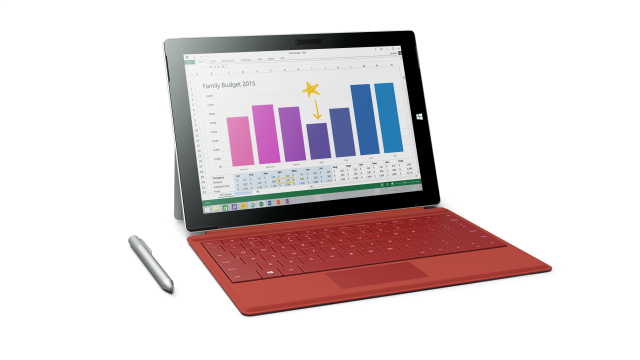 Following the release of the very well-received Surface Pro 3 last year, Microsoft continue to remain consistent as they add to their Surface family with the Surface 3 laptop-tablet hybrid. It’s certainly the megabrand’s most valuable hybrid to date, with price-point, power and performance admirably balanced with consumer convenience in mind.

Starting price is $699 for the basic model, giving you 2GB RAM and 64GB storage. If you want 4GB RAM and 128GB storage then the price jumps up to $839. However, to get the most out of the Surface 3, you’ll need to purchase the add-on keyboard (Surface 3 Type Cover) which retails for $179.99. Less essential is the Surface Pen which will set you back $59.99. An upcoming model of the Surface 3 will come with LTE 4G mobile broadband and will reportedly be $140 more expensive. These current models all come with Wi-Fi 802.11ac, which means efficient link speeds in the range of 433 Mbps to several gigabytes per second.

The keyboard may as well be factored into the actual cost of the Surface 3 as the device is at it’s most impressive with the type cover attached. Two magnetic strips on the bottom of the tablet make for easy, seamless attachment and also raise the keyboard this time as opposed to having it flat on the surface. This makes it much easier and smoother to type on, easily edging the Surface 3 closer to being a replacement laptop for when you need something lighter (622 grams) and more convenient.

Surface 3 is incredible in it’s design. The silver magnesium alloy body is smooth to hold; maneuvering it around as you do something like watch Netflix is incredibly efficient. The kickstand which simply pops out from the back can be moved into 3 different positions, each giving you a different perspective of the screen in different orientations. It’s not as customisable as the Pro 3’s kickstand, but it’s set in 3 of the most commonly used angles so that sacrifice is negligible.

The device is 8.7mm thick and has a 10.8 inch 1080p screen with a 3:2 aspect ratio; it’s perfect for both entertainment and work as far as visual appeal goes. Although it is less powerful than the Pro 3 – the biggest reason for it’s cheaper price-point – the Surface 3 successfully appeals to those needing a little bit less in both performance and cost.

The ports also assist in the use of Surface 3 as an entertainment device. You’ve got the single full-size USB 3.0 port which is especially handy if you have a few thumb drives full of your favourite movies/tv shows. There’s also a MicroSD Card reader, a headset jack, and cover port, a MiniDisplay port, and the charging port which uses a Micro USB.

Being able to use any USB charger is a very welcome feature here, and the device itself comes with a high-powered microUSB charger. A full charge takes about three to four hours in standby mode; which I find is considerably slower than the Pro 3.

In a most significant move for the Surface 3, as far as performance goes, the device moves away from the divisive Windows RT. Surface 3 now runs a full version of Windows 8.1, with the offer to upgrade to Windows 10. the Live Tiles start screen from Windows 8 and beyond has always been a mild frustration on laptops but on touch-friendly tablets it feels completely different; the tiles are actually welcome here and make moving through the software a smooth and enjoyable process; one which actually looks and feels progressive rather than just a cheap gimmick.

Surface 3 boasts up to 10 hours of video playback, and it seems true from what I’ve tested (I watched the entire first season of Daredevil on it and only needed to recharge once – great show). The audio is also much better than previous models, with stereo speakers using Dolby audio-enhanced sound. In terms of just using it to watch movies and TV shows, the Surface 3 is a winning entertainment device.

Surface 3 is driven by an Intel’s Atom x7 1.6GHz quad-core processor, a big difference from the powerful Intel Cores found in the Pro range. It’s less powerful but that doesn’t really affect your experience of Surface 3 unless you are pushing it with too many ambitious programs or using it strictly for gaming (smaller games do run very smoothly, but cracks appear when larger ones are attempted). As far as everyday tasks go, there should be absolutely no issue with the way Surface 3 runs.

With the Surface 3 comes a 12-month free subscription of Office 365 Personal (letting you run Office on one computer and one tablet). The full versions of Outlook, Word, Excel, Publisher, OneNote and PowerPoint are here. OneNote is of particular interest because it works in harmony with the pressure-sensitive stylus pen. One click on the top of the pen automatically opens up OneNote (and subsequently, a new page each time it’s pressed) and instantly allows you scribble notes down. The pen has a nice grip to it and two other buttons (one as the eraser and one for right-clicking).

Having the option to seamlessly have your handwriting transformed into type as soon as you lift the pen up off the screen makes the Surface 3 something that should revolutionise lecture theatres around the world. The pen makes zero noise when writing (as opposed to an actual pen on paper), which may have a small but notable impact on the atmosphere in lecture theatres (for example). With the price and the functionality, Surface 3 seems perfectly designed for students (and journalists).

With the keyboard attached, the Surface 3 can serve nicely in the office although it is not a complete replacement for a laptop. It takes some getting used to when picking the tablet-and-keyboard up; you have to pick it up from the tablet as the type cover isn’t near sturdy enough – slightly rubbery and floppy.

With performance solid for general computing processes and the added bonus of the type cover and pen, my overall experience of Surface 3 is an overwhelmingly positive one. The connectivity is a big reason for my personal enjoyment (I mainly have been using it as an on-the-move entertainment device, to quickly jot down notes, and as a calender), as is the seamless movement of it.