Given that, years later, the Sony WF-1000XM3 truly wireless earbuds are still the best out. Yes, still. It’s an interesting prospect to get a pair of budget buds from the company. Can they be as successful on the other end of the price range? That’s a loud and clear yes, although there are obviously cost-cutting compromises when it comes to the Sony WF-XB700.

Want the best Sony headphones? Click here to read our review for the WH-1000XM4.

The design is vastly different to what Sony has attempted before in this space. The buds are more avant-garde in their design, with a rounded, oblong aesthetic. It’s not quite as adventurous and eye-catching as the Anish Kapoor-esque Galaxy Buds from Samsung, but with them looking like little disc-shaped beans, I admire the attempt at doing something different.

Find the right fit by swapping between the four provided silicone tips, working with the oval-like contours of the buds to ensure comfort. If you’ve done it right, they feel rather slick and ergonomic in the ears, if not a bit chunkier thanks to the wider profile that brushes higher on the ear. Each bud weights 8g, so they are light for added comfort, and won’t bob around in the ears when you’re out running. And to be clear, these are sports-friendly earbuds, although the IPX4 water resistance is too modest to shrug off anything more than light sweat and splashes.

The physical buttons are on the underside of each bud, foregoing to touch sensor for clicky and responsive functionality achieved through various quick presses and holds. The playback map is a bit different to many other buds on the market. Press the button on the left bud to increase volume, hold it to decrease it. On the right, play/pause and answer/end calls with the button, which can also be used to navigate forwards (two presses) or backwards (three presses). They are responsive, but I still feel like any button that requires three presses is going to be easy to confuse when it comes to quickly dialling in controls. I’m used to earbuds like this by now, so I encounters no issue. But I did take some getting used to earbuds that started to throw in too much functionality for their few physical buttons. 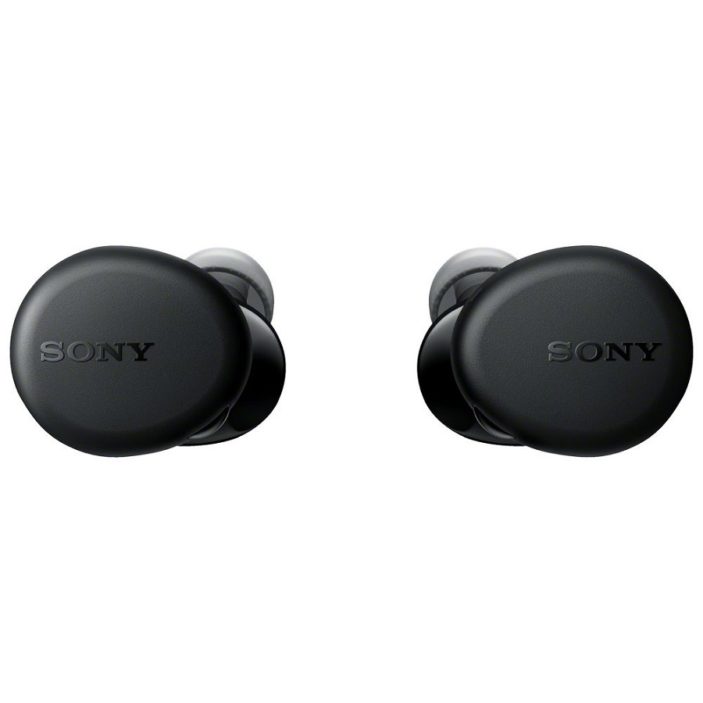 Given the XB700 is part of Sony’s “Extra Bass” range, it’s safe to expect a stronger and more forward low-end in the overall sonic profile while the 12mm Neodymium drivers work. This of course sacrifices a bit of balance, with mids and highs not as present on lower volumes. Still, the sound is mostly fantastic without any element sounding harsh, no matter the volume.

The low-end is still quite obviously the focus at every stage, so hip hop and electronica sound great on this. But it’s not enough for the buds to pick up the more nuanced bass details on tracks like like Mystikal’s “Neck Ov Da Wudz” or OutKast’s “GhettoMusick”. Something like Deadmau5’s “Strobe” fares much better, with less density and clearer separation of the layers; this is where the buds sound their best – when they don’t have to work as hard to pick apart details in thicker soundfields. After all, they have to fend for themselves without Sony’s top-tier processing chip.

There’s quite a bit of lag when I’m streaming Netflix (or Prime) with these in, and Netflix has been atrocious lately with latency. I’m not sure why, but to be safe I wouldn’t rely on these when streaming content as sync could be too much of an issue.

Still, it’s hard to not like sound this good at this price. The Sony WF-XB700 is $179. That’s chump change when thinking about premium wireless earbuds. Even if there’s, disappointingly, no noise cancelling (which has its pros, especially for sports users and those wanting to maintain situational awareness).

The XB700 should last you 18 hours in total, as a function of reasonable use (no more than 70% volume). That’s nine hours from the buds on a single charge, and nine hours when boosted by the charging case. 10 minutes of charge nets you one hour of playback. That’s Sony’s claim, and for my experience, it’s accurate. It’s not the best at this price range, but it’s far from the worst.

Without the company’s high-end processing chip, the Sony WF-XB700 is never going to reach the sonic superstardom of the flashier, and more expensive, XM3. But you’re still going to get quite the commendable performance, with a comfortable sports-friendly design and decent battery life. The lack of Bluetooth codecs and input lag does put a chip in the value, but as long as you’re mainly using these for running and going to the gym, it’s hard not to be satisfied.

Sony WF-XB700 review based on a unit supplied by Sony.