Sony Master Series A9G OLED TV Review: I swoon every time I turn it on

Light, lean and already considered one of the best OLEDs available, Sony’s Master Series A9G earns its place amongst the company’s finest products and, with a powerful symphony of super features, justifies its reputation as the “best TV of 2019.”

The hallmark of a good OLED is that the technology can still blow you away, each and every time, despite market saturation. The A9G is a leader in that sense, smartly enhanced to offer one of the most seamless and extraordinary home cinema experiences around. This also comes with a price tag of course, which has since been lessened with the comparable but considerably less powerful A8G.

Although the A9G’s success is mostly hinged on its outstanding performance, credit should also go to the light design choices made, finessing the idea of a traditional look with a great sense of style. A high-end, minimal profile hits in all the right places, most notable being the unit’s aggressively straight composure, moving away from the lean-back pose of previous models.

A simple and sturdy pedestal stand helps maintain a low profile, with the TV resting close enough to any surface to give the impression of a dazzling floating screen. This also looks fantastic when the unit is wall-mounted, with the electronics box and subwoofer system kept thin so the unit creeps closer to the wall.

Anyone who appreciates tiny bezels (ie, everyone) should be very satisfied with the unobtrusive frame here. On most views, I would barely notice the thin black frame running around the TV, which when compared with other models is a notable achievement for the designers.

Around the back of the unit, connectivity is well spread out so cables can come from either end. This includes four full-flat 4K HDMI inputs, with the prime HDMI port also sporting an advanced eARC for lossless audio pass-through, channelling higher-quality audio for a better overall experience. There’s no HDMI2.1.

Also on the back you’ll find an AV minijack, optical digital audio output, three USBs, a headphone socket and an Ethernet port. But most notable are the stereo spring clip loudspeaker terminals, allowing users to easily hook up a multichannel system and have the unit act as the centre speaker.

And given the Acoustic Surface Audio+ technology, which has reshaped actuators pumping punchy vibrated sound out of the unit, and woofers on the rear end, you’re going to want this TV as your main speaker. The sound is outstanding, easily placing this as the single best sounding TV I’ve personally experienced.

I wouldn’t be putting a thick soundbar in front of the TV, unless it’s wall-mounted. Because the TV sits very close to the surface, as mentioned above, even a thin soundbar would look jarring directly in front of the unit. That may be slightly annoying to someone whose in that very specific situation, but for the most part having the unit so low just looks better.

Special mention must be made to to the clean and efficient cable management system at the back. It’s a simple system through which the cables can be routed directly allowing for enough flexibility as necessary. With all the ports facing either down or to the side, this makes attaching and removing anything a breeze and avoids any frustrating fiddling at the back.

Picture Performance – Travel from the Couch 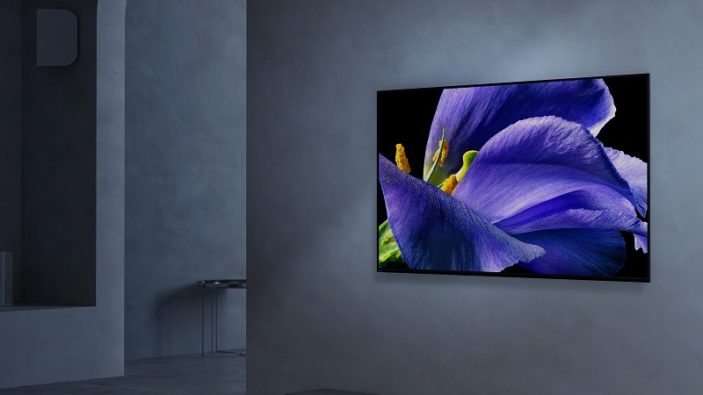 Sony’s patented Picture Processor X1 Ultimate is a big deal here, and it can handle pretty much anything you throw at it. Best-in-class upscaling is the result that set A9G apart from its contemporaries when it was arrived last year, earning it that ritzy “best TV of 2019” accolade companies strive for. It’s well deserved. The X1 Ultimate is a workhorse, with all the subtle lifting required to enhance content to the standard best suited to the panel.

Deep blacks and natural colours are complemented by a Pixel Contrast Booster to handle high luminance, constantly adjusting and tone mapping individual objects for an overall image that really pops, in just about every situation.

Watching Game of Thrones’ infamous “The Long Night” – with all its can’t-see-shit glory – only reiterated this. While the episode was still too dark – an issue with the way it was filmed more than anything else – I had never seen it look so substantially better than on other screens. And I’ve watched it at least six times.

As with most smart TV’s, I always find myself falling into a YouTube circle of 4K travel content. Right now, given the whole isolation thing in response to COVID-19, that’s been so important given the lack of mobility we’re all experiencing.

In the past two years I’ve become used to being overseas at least once per month, so being able to search for immersive 4K travel content and experiencing it in all its vivid glory has been a mind-saver. Watching a destination come to life, like Downtown San Francisco on a cloudy day, Tokyo’s Shibuya Crossing, has helped me immensely. I tried to replicate the same level of immersion on another TV (an older LCD) and a laptop – the original Microsoft Surface – and the difference in feeling hits you like an Airbus.

Then of course are common test videos like this 4K video of Costa Rica, or this ridiculously stunning video of Iceland. Watching these, with the vast array of colours and movement on display, really pops things out. The TV brings these travel videos to life. And for people who aren’t able to travel right now, that’s everything.

Content on Netflix, Stan and Foxtel Now are all looks tremendous. I binged through an entire re-watch of The Walking Dead (it’s still very good, okay) on Foxtel Now and was consistently impressed by the upscaling.

Although the Foxtel Now Android App has been calibrated for Sony TV’s, there’s still a noticeable lack of quality when compared with Netflix and Stan. Here, the content is pulled up to a very high standard, and the epic shots of TWD season 10’s giant walker herd, with all the decaying skin and Greg Nicotero’s highly textured makeup work, shines through brilliantly.

Even better was Better Call Saul on Stan. The show’s various directors, Vince Gilligan especially, really like to play with light and shadow. The A9G handles highlights the show’s more subtle details, especially when shadows are involved. Having so much brightness to play around with also shows how well the dynamic tone mapping works, in a way that almost distracts me from the plot. Before this, I never fully appreciated what a visual feast the show is.

Sports playback clearly benefits from Sony’s X-Motion Clarity feature, which handles motion smoothing seamlessly. Movies heavy on actions scenes also benefit greatly from this, making it much more enjoyable to watch some of the more terrible action films available for streaming at the moment.

The special Netflix Calibrated Mode (there’s even a dedicated Netflix button on the well-designed remote to instantly bring up the App) may be mostly a label, but it does reiterate just how much of an impression this TV has made on the industry. Basically it means that the metadata for select Netflix Originals is handled so well that the content creators have slapped their approval on this, validating the Master Series status as a device that shows content the way creators intended.

Android TV – It Is What It Is

Like all other modern Sony’s, this runs a current version of Android TV that’s smart, intuitive and laid out in a clean, logical manner. The design is faultless, and everything is easily accessible at all times with one press of the ‘Home’ button. It’s certainly an improvement on previous iteration of Android TV, and given the Google attachment, voice services are integrated just as well.

But Sony have decided to only give this thing 2.5GB of RAM. Which mostly runs without issue, but has caused a few kinks from time to time. I’ve had the operating system freeze (particularly with Foxtel Now) and require a reboot, and free-to-air Apps like TenPlay sometimes not start at all. Granted, this is very rare (try 3 times in a month), but for the kind of money this is worth, it shouldn’t be happening.

The overreliance on streaming may also be a pain point for some consumers if they don’t have a strong internet connection. There’s no tuner here, not even the ability to record free-to-air onto a USB disk. Sports fans may see this as much more of an issue than I do, but well, it’s still there.

Other than the few very niggling issues, I really like this version of Android TV. It’s a pleasure to navigate, cuts out any navigational issues, and 99.9% of the time works lightning fast.

There are almost no compromises made if you choose to go with a Sony Master Series A9G. It was frequently named the best OLED of 2019 for good reason. And when 8K starts to actually be a thing, it has the necessary power to keep up with modern TVs and avoid from fading into irrelevancy. You’ll get years of feeling ahead of the curve with this, with picture quality I really don’t think is going to be significantly bested anytime soon. Although pricey, it’s the best-in-class. And besides, if you want something a bit less expensive, you can always go for the very similar – but slightly less powerful, as mentioned above – A8G.

This review is based on a 55-inch Sony A9G supplied by Sony. Images credited to Sony.