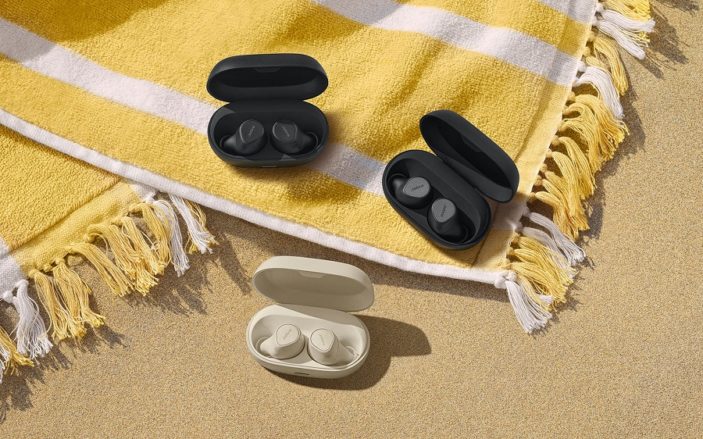 With a sturdy IP57-rated design, seamlessly adjustable active noise cancelling and up to 30 hours of battery time, the Jabra Elite 7 Pro is another world-class entry into the market of truly wireless earbuds for the brand. And while Jabra may be best known amongst gym-goers for their Active series, these lifestyle-focused earbuds muscle into the top-tier of the market right alongside Bose, Sony and Bowers & Wilkins.

The Jabra Elite 7 Pro has a number of changes from the brand’s previous buds, not only managing to fit in much longer battery life but featuring a refined and rather elegant redesign that is 16% smaller and lighter (5.4g each bud). The benefit of this is longer-term comfort, which is crucial with earbuds if you’re going to be listening to them all day throughout your commute to work, in the office, and out on your lunch break. This also makes them ideal for use on a long-haul flight, seeing as it’s much easier to sleep with these tucked into your ear than it is with bulkier earbuds or any over-ear headphones.

As Jabra’s current flagship true wireless device, the Elite 7 Pro – which launched in Australia late last year – has seen plenty of competition pop up other the past few months, but after using these since October as well as comparing them with a few of the newer lifestyle earbuds, it’s clear Jabra has landed on something that’s perfect for the right-now, and won’t easily be dated when the inevitable Elite 8 Pro launches (whenever that may be).

Jabra has clearly focused on in-ear fit more than ever with new earbuds, but what’s driving the sound, ANC and overall function of the earbuds has also been refined quite nicely. Central to this is the introduction of Jabra MultiSensor voice technology, made to more accurately and efficiently isolate voice on calls using a bone conduction sensor in tandem with four microphones and an algorithm that’s obviously designed in reference to call clarity being of the utmost importance.

Call clarity is a regular painpoint for those who use earbuds (and headphones for that matter) so it’s a good area for Jabra to try and dominate. And the brand has done a reasonably good job at it. Even with the latest Sony flagship buds, I’d still come across as slightly distant and a bit robotic to a caller on the other end. With the Elite 7 Pro, the issue is somewhat improved. From reports, I sound much clearer and hence a bit more intelligible. But it’s still easy for the caller to tell that I’m using earbuds instead of speaking into the phone’s speaker.

An IP57 rating – the same as the Elite 7 Active – Jabra has once again shown that resilience is a value for Jabra that seems a bit lost on other brands who aren’t necessarily paying much attention to significant waterproofing. The AirPods Pro, for example, still features a very poor IPX4 rating. An IP57 rating protects substantially from both dust and water.

Sound quality when listening to music with the Jabra Elite 7 Pro was never in question anyway. Previous Jabra earbuds have always managed to come out at or at least near the top where performance is concerned. The brand has a very clear focus on balance, restraining the bass a bit to help those mids and highs really come through with detail. As such, soul and jazz sound just as good as more bass-heavy music like hip hop and EDM.

But Jabra shouldn’t be applauded just because of that. The other factor in the equation of sound is ANC and how well the feature has been calibrated so the mics pick up noise and cancel it out in real-time when you choose to do so. It’s important with ANC that it always remains as adjustable as possible, Jabra’s ANC is perhaps some of the most seamless and effective I’ve experienced to date. Those high pitches disappear as soon as I pop these in and switch to ANC mode, and conversely, the amount of noise the buds can let in whenever you want to switch to transparency is absurd and surprising. Sometimes it can feel like I’m not even blocking my ear canals with some buds.

Another feature I really like is the ability to use just one earbud while the other is charging. Although admittedly this a very niche use case and rarely something I’d find many benefits in. Regardless, it’s appreciated that both earbuds can work independently of one another, which makes it much easier to maintain a stable Bluetooth connection that’s quick and frictionless.

The only thing I would improve is to introduce the aptX codec that helps with a broader range of audio formats and also addresses lag issues. Watching these with Netflix, I still notice sometimes audio would fall behind the image which is not a good look.

Jabra promise 8 hours of non-stop playtime, boosted to a total of 30 hours with the reasonably slim charging case. Promised and delivered. This is one of the few instances where I’ve read an advertised battery rating and actually experienced it in real-life testing. Of course, this is give-or-take a few based on your individual usage, but for an average user, these will surely impress with just how long they can last before needing a charge.

$300 is a very reasonable price to pay for some earbuds this good. While similarly performing buds can top out at around the $400 mark, Jabra has landed on a very sweet spot when it comes to balancing price and performance.

While changes may be small from the previous generation’s flagship, Jabra has tweaked all the right features to arrive at something that delivers incredibly well on all fronts. It’s a reminder of just why Jabra should be mentioned alongside brands like Sony and Bowers & Wilkins when we’re talking about the best wireless earbuds on the market

This is a long-term review that is based on using the Jabra Elite 7 Pro for over 6 months. Product supplied for the purpose of this review.