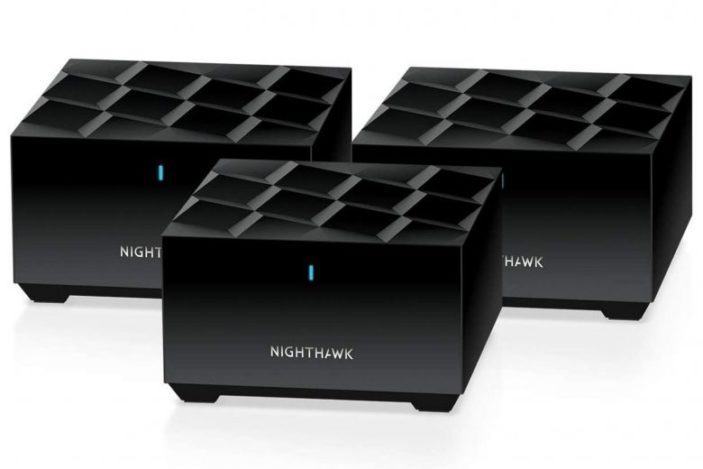 Although Netgear is better known for the Orbi when it comes to mesh WiFi, Nighthawk is proving just as viable for the company as the demand, and need, for preping homes/offices for WiFi 6 continues on an upswing. Like all others on the market, this is a mesh system primarily designed to boost a WiFi signal and carry it, consistently, across large houses or multiple office spaces. The sector has been particularly valuable in 2020, with work from home sitting alongside typically demanding 4K streaming and intensive gaming. For families, it’s a no-brainer.

Having done a bit of recent freelance work in an office where the WiFi is working fine on one side, and while the other end offers a completely different story – with either the signal dropping out or not showing up at all – I’m very much attuned to the need of a good mesh system. This is especially important in offices where modern tech devices are numerous and insatiable with data.

I’ve already looked closely at Amazon’s eero system, as well as D-Link’s COVR 1102. Now I turn my attention to Nighthawk MK63, presenting a relatively affordable and well-designed EasyMesh-certified pack, boxed with A WiFi 6 router and 2 nodes.

Straight out of the box you get a three-piece system, consisting of a central router and two satellites/nodes rated to extend WiFi coverage for homes of up to 3500 square-feet. That’s easily a full size (and in Sydney, ridiculously expensive) family home, so those who live in smaller spaces might want to cut down and either go for a more affordable alternative, or grab the MK62, also from Nighthawk but with only two units rated for homes up to 2,000 square-feet.

Where the Orbi, undoubtedly Netgear’s more popular system, opts for a minimal all-white look, Nighthawk dresses in black. The sleek looking square-shaped units fit well into most design schemes and are largely unobtrusive when positioned high. And ideally, you want them placed relatively high. Fortunately the design is compact and convenient, with Netgear wise enough to include 2m long cables (power and ethernet).

The system has been designed to only support dual-band WiFi 6 (802.11ax), so those after a more load-bearing tri-band should be looking at something more expensive like the Orbi RBK852. Regardless, it’s expected at the mid-tier price point, as is the total speed of 1,800mbps (600 for 2.4GHz, 1200 for 5GHz). This should be more than enough for a typical smart home or a mid-sized office packed with lots of devices.

It’s reasonable to expect most consumers these days will have a mix of devices, some that can support WiFi 6 while others that still peak at WiFi 5. That’s fine, since WiFi 6 is 100% backwards compatible and older devices should have absolutely no issue taking advantage of the uptick in speed, efficiency and wider access points. Even for those without any WiFi 6 devices at all, the increase in capacity should be clearly noted as WiFi 6 still increases the efficiency between the router and its satellites.

On the primary router you’ve got two Gigabit Ethernet ports (one is obviously meant for connecting to the broadband modem), and on the two satellites you have only one. Given that the system is one of the cheaper WiFi 6 ones out there, this isn’t too big of a deal, but it does mean that those who want the best performance – wired – for multiple devices will need to buy an external switch for more ports.

Without using an Ethernet backhaul, I would consistently get some impressive speeds when close to the router, with my WiFi 6 enabled laptop averaging out at 102Mbps (download). That’s more than double what I get without any kind of mesh system in place, which is a fine prospect given I plan on having both the Xbox Series X and PlayStation 5 dominating my WiFi over the next few weeks.

However, unwired performance drops significantly when moving further away from the primary router, even with the satellites generously spread through the house. That defeats the entire purpose of having a mesh system in the first place, although throughput was still much better than what I could expect without the system in place.

Disappointingly, the Nighthawk system doesn’t give you any built-in security, parental controls, or but you can set up guest networks and easily pause specific devices using the basic but easy to use app.

Speaking of the app, set up is as simple as any other mesh system I’ve tried. But the lack of features means that the set-up is incredibly basic. This is where the bigger compromises lie, but if you’re okay with not being able to manipulate your network with a rich feature set, there’s next to no issue.

The prospect of EasyMesh certification (which I believe still hasn’t happened yet, since I stopped testing the devices three weeks ago) adds a lot to the value here, especially now that WiFi 6 mesh nodes will be dropping in price as competition goes up. You’d be able to use this with the D-Link COVR, for example, which opens up plenty of flexibility in both budget and design taste.

$649 AUD is still quite a lot to fork out for a mesh system that fails where it matters the most. Though the Nighthawk performs very well when you’re close to the router, or hooked up to Ethernet, the drop-off when moving away is quite significant and puts a big dent in performance. Still, WiFi 6 mesh systems are still quite expensive, so Nighthawk is a good choice for those who just want the basics.

But do you need a WiFi 6 enabled system? That’s the main question you should be asking yourself before diving into this. A top-tier WiFi 5 mesh system will do just as well, so it really comes down to what you need.

Highlights: Excellent performance when on Ethernet or close to the primary router; easy to set up and understand; cheaper than most WiFi 6 systems; EasyMesh certification.
Lowlights: Drop-off when moving away from the router is too significant to ignore; lacking in additional features.
Manufacturer: Netgear
Price: $649 AUD
Available: Now

Review based on unit supplied by Netgear.