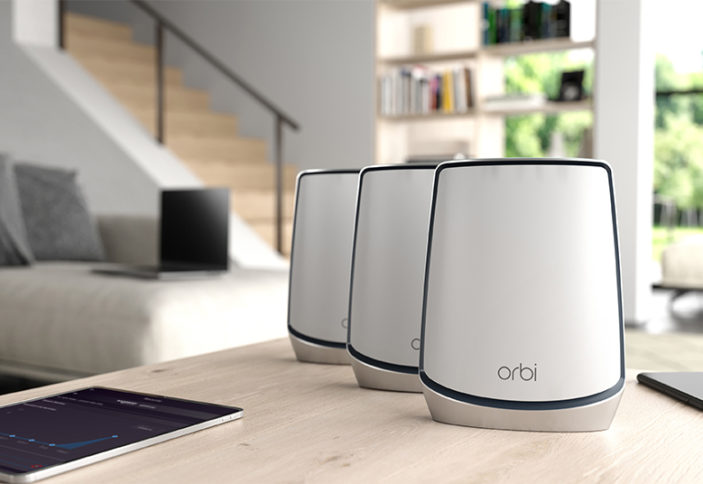 The Netgear Orbi WiFi 6 just may be the most reliable of its kind right now. It’s blazingly fast, beautifully designed, and shows of just how powerful and important having a mesh system can be when building a more modern, smarter home.

Although having one would depend on your needs.

A home of modest size could easily get by just as well with a WiFi 6 mesh system that’s much, much less expensive. You won’t have any sacrifices, but if you do want the best, I’d give Orbi some serious thought.

The series has already picked up a few awards for Netgear, and with Orbi launching mid-2020, the applause hasn’t ceased.

First you’ve got the RBK752 at $949, and the flagship RBK852 for $1,399. The latter can support over 60 devices with 12 simultaneous WiFi streams, while the former can support over 40 with 8 simultaneous WiFi streams. You will have absolutely no need for the latter unless you’re a large-scale office. Even the former is pushing it for the average smart home, but it still beats much of the competition for speed, design, features, and ease of use.

Both tri-band models have a dedicated wireless backhaul to an exclusive 5Ghz channel for data can be exchanged much more efficiently, negating network congestion and highlighting how smooth an internet connection should be. In other words, all devices will run much faster, more reliably, and most importantly maintain a strong connection even at this most data-intensive times, while still freeing up the two primary bands – 2.4GHz and 5GHz – for your downloading and uploading.

Orbi has easily the most fascinating and eye-catching design of any mesh system on the market.

The sculptural pouch-like nodes are quite tall and fat though, which commands more space if you’re trying to blend this in with design (on a bookshelf, for example). Each node is around 25cm tall and all have four Ethernet ports on the back.

Perhaps the reason for the hefty futuristic body is a seriously superior performance. Just a pack of two Orbi 6 satellites promises a coverage area of up to 465 square metres. You can also get the Orbi 6 in a three-pack, and add on individual satellite nodes if you so need. But for most cases, the two-pack will do just fine.

Each unit responds reliably to both Alexa and Google Assistant, making it much easier (and more fun) to control multiple aspects of your WiFi connection and manipulate data to work best for you. This includes setting up a dedicated WiFi guest network to keep any visitors away from the main connection, but still offer them a fast signal.

In terms of setting up, Netgear have made the process incredibly simple. Although this isn’t much different from similar mesh system routers from competing brands. It’s just about downloading the Orbi app and spending about 10-15 minutes with it while it guides you through the very simple set-up process and updates the firmware.

As I’ve made clear above. I’m very, very impressed.

The Netgear Orbi WiFi 6 mesh is perhaps the strongest on the market, supporting 802.11ax standard with wireless speeds of up to theoretically 2,400Mbps on the 5GHz band. This is where your devices come into play. If you’ve got WiFi 6 compatible devices, you’ll get better and more consistent speeds. Although this is an unrealistic expectation, seeing as there still aren’t many WiFi 6 compatible devices out there. Consider this future-ready.

Of course, reviewing the performance of a mesh system has issues. Your home set-up will be different to mine, no matter what. I’m in an apartment with fairly thick walls, with the Orbi 6 satellites sitting in the other room. As you can imagine, I have no problem at all.

What’s the price you pay for the top performing mesh WiFi system on the market? You’re looking at $949, and that’s if you’re going for the RBK752. If you want the flagship, the price is bumped up quite a bit, all the way to $1,399.

I wouldn’t go upgrading an existing mesh to the Orbi, provided you are happy enough with what’s in place right now. Simply this is because of cost. It’s a hefty investment, but if you don’t have any such mesh system yet and your smart home is growing in device saturation, it’s kind of worth it.

Never before have I experienced speeds like this, with just a better overall experience using the internet both for work and for leisure. If that’s worth something to you, then the Orbi 6 is a fantastic investment.

Highlights: Incredibly fast and consistent speeds; truly shows off what a real connection should look like; very easy set-up; responds instantly to Google or Alexa voice control.
Lowlights: Quite thick in design and hard to fit in with other design elements; very expensive.
Manufacturer: Netgear
Price: From $949
Available: Now

Unit supplied by Netgear for review.