JBL Club One Review: A step in the right direction 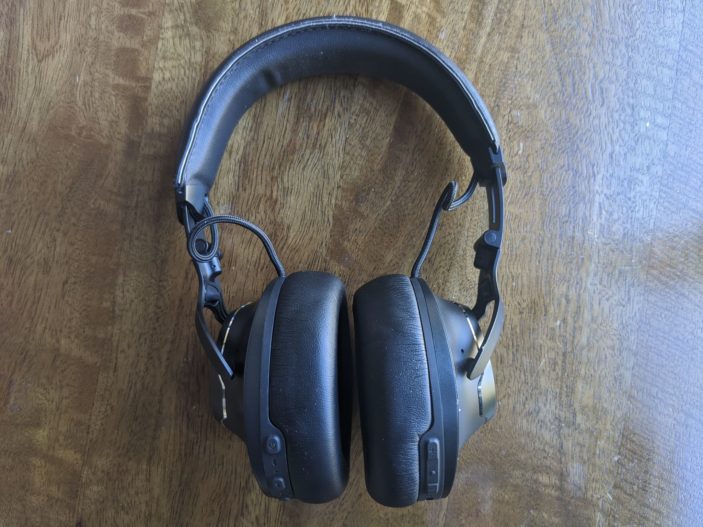 JBL’s latest collection of Club series noise-cancelling wireless headphones reaches its apex with the Club One, inching into the higher-end category and competing with acclaimed offerings from Bose, Sennheiser and Sony. It’s a crowded market for sure, but JBL certainly has what it takes to muscle around with the most popular cans on the market.

Can they do it with the Club One? The brand’s noted flex when it comes to bass-boosting, and its extensive connection to DJs around the world, mean that the series is obviously geared towards those more upbeat listeners but, as we saw with the 950NC’s (review here), bass means nothing if a sturdy low-end blows out the balance. 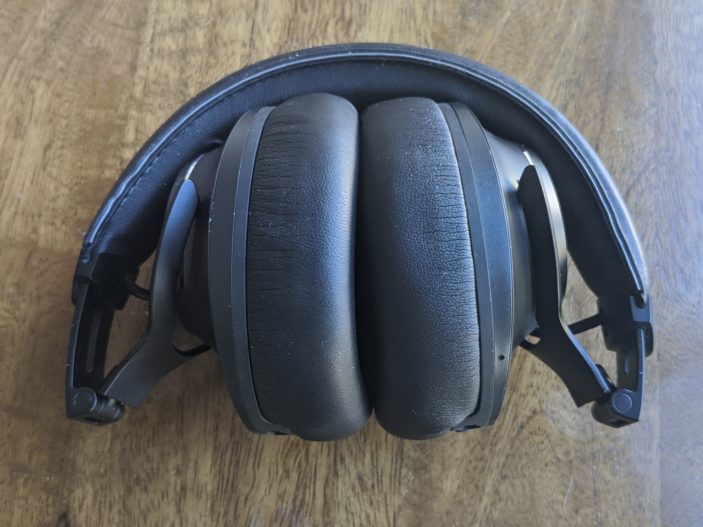 Obviously, these are best aimed at touring DJs and anyone who wants to harness that party-minded euphoria, best evidenced with the inclusion of a 1.5m coiled cable which sounds fantastic when connected to an amp. In fact, there is one jack on each earcup, so DJ’s can use two sources at once. Although for the average consumer, this isn’t really necessary.

The jacks also have a neat lock mechanism so the wires are less likely to be pulled out if they are snagged on something.

The actual build quality is far beyond what you’d get the 950’s. Where in my review for the mid-tier headphones I noted that they felt clunky, the Club Ones benefit from a better quality stitched headband that has a much looser clamp and doesn’t feel as oppressively tight on the head. The padding between your head and the band is also much better, as are the memory foam earpads which can also be detached magnetically for easy cleaning.

Though the earcups, which swivel easily and can be folded to fit in the bulky clamshell case, still feel rather small on the ears with much less space than say than comparable offerings from Sony and Bose.

It does say a lot that despite the Club Ones being a few grams heavier than the 950s, they feel much more comfortable on the head. The difference premium materials can make.

Aside from the absence of the Bass Boost mode on the 950s, which I wasn’t a fan of, the button layout and function is exactly the same on the Club One. Although the buttons do feel a bit more responsive and easier to press.

On the left, the main power button sits next to the Bluetooth pairing button and one that quickly toggled active noise-cancelling on and off as well as controls Ambient mode to allow external noise in under the music. The JBL logo on the left cup also acts as the headphone’s smart button, tagging in your chosen voice assistant (out of Alexa or Google Assistant) when need be. Notably, a 2.5mm headphone jack also sits on this panel, but given the thick design I’m not sure why they wouldn’t just have included the standard 3.5mm.

Move over to the right earcup and you’ve got the USB-C, volume rockers that also double as playback controls, a button to answers calls, control playback and summon Siri on Apple devices. 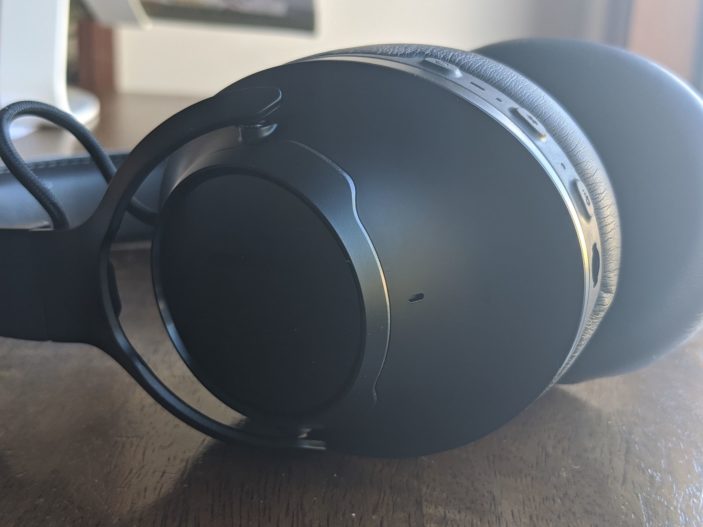 The volume rockers are of particular interest here, and in an attempt to stuff as many onboard controls as they can, JBL has made the unfortunate decision to double-up the duties of these two buttons, meaning a long press will either skip forward or lean backwards on a playlist, while a quick press will control volume; as such, the two functions can be easily confused. This is doubly frustrating if you’re watching something on a streaming service and go to change the volume but accidentally (and easily) skip to the next episode. It’s much easier just to control these functions from your connected device.

It’s also easier to just use the clean, uncluttered JBL Headphones App, which is where you’ll want to be regardless to take full advantage of the nuanced EQ settings. Here you can also toggle on Talk Thru mode, which lowers volume so you can have a conversation without having to remove the headphones, and Ambient Aware which lets outside noise in under the music, without lowering volume. Both modes are standard and expected with ANC headphones in 2020, but they are certainly more accurate and detailed than other pairs I’ve tested, excepting more expensive ones from Bose, Sony and Sennheiser.

It seems the Club Ones also go with the same excellent dual mic set up as their cheaper cousins. Clear and intelligible call quality is often an issue with even the best ANC headphones on the market, and its a mark in JBL’s favour that they excel here. Calls are sharp for all involved, cancelling out unwanted sounds even in noisy environments. 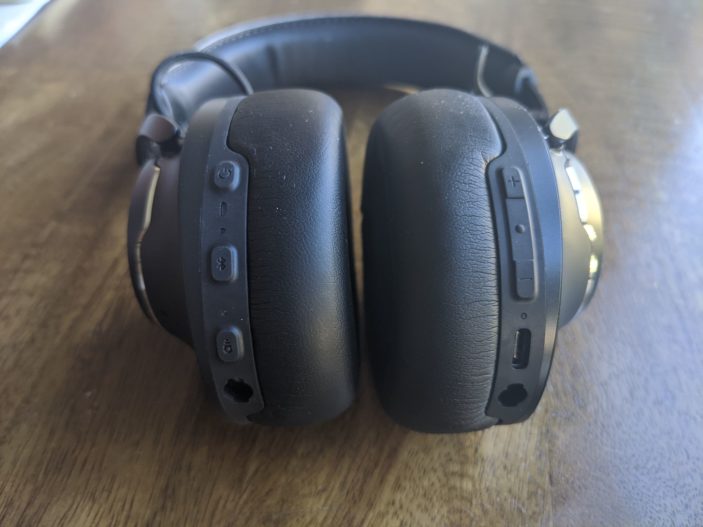 That a pair of JBL cans excel when it comes to bass is no surprise. Even the 950s offer a nuanced performance for those low-frequency rumbles and sub-heavy tracks like Big K.R.I.T’s speaker-testing “Ballad of the Bass.” It’s more or less the same here, but the key difference is that the Club Ones just have a better overall balance. Those deep, dirty basslines and impactful on songs like D.I.M’s “Is You” and Mystikal / Outkast’s “Neck Uv Da Wudz”, but listening to styles like Jazz and Rock are equally viable with the natural sounding, sculpted mids and highs.

Importantly, the balance remains solid even at the highest levels. Although the max volume really isn’t as high as I would have expected.

If anything sounds off for your individual tastes, JBL’s app has an excellent and easy to use interface with brilliant EQ control. There are even a few pre-sets worked up in collaboration with various popular DJs, but I found their profiles to be – unsurprisingly – biased towards the more simple EDM styles. More complex and ornate productions from the likes of Four Tet and Caribou require some fiddling with the EQ before they begin to impress.

Although separation isn’t quite as good as competing models from Bose and Sony. An orchestral piece like Max Richter’s “On the Nature of Daylight” isn’t quite as revelatory on the Club Ones, with more muted details unable to muscle their way into the mix. And that song isn’t even particularly complex.

Signal is strong and is maintained over a decent distance with Bluetooth 5.0, even when jostling up and down on a morning jog. Although over-ear cans aren’t ideal for anything but walking, the relatively tight fit and small earcups ensure that there’s less slippage if your head is moving frequently. 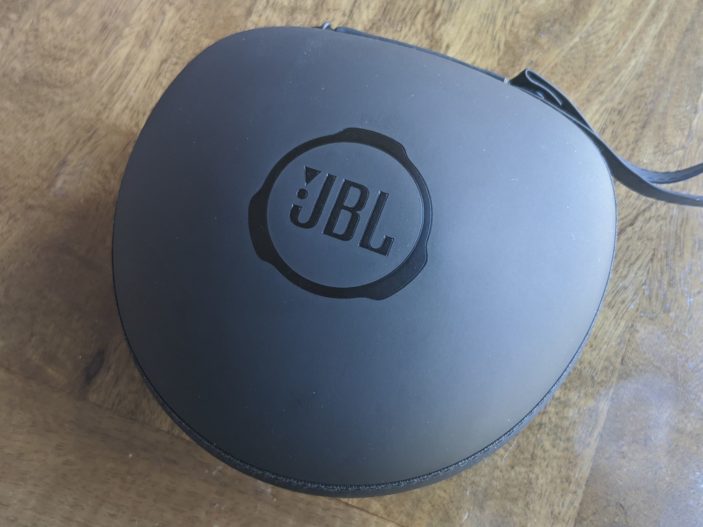 JBL promise 25 hours for those making full use of headphones, with ANC and Bluetooth toggled on. 45 hours is the estimation with no ANC, but both vary quite a bit depending on volume. I pump my music to the max when it’s anything but jazz or classical, but even then I would easily get through a full day without having to charge.

Notably, the promised battery life is significantly less than that of the cheaper 950s, but the Club Ones are much more superior than the mid-class cans in every other way.

There’s a significant bump in quality when moving up from the 950’s to the Club One, and its not just most noticeable in the design. The Club Ones just sound better overall, and while the ANC could be a bit more nuanced and accurate (still getting those higher frequencies) at this price range, they compete nicely when playing against the slightly more expensive offerings from Sony, Bose and Sennheiser.

But A$499 is still an ambitious ask seeing as you can pick up Sony’s WH-1000XM3 for $100 less, with the former champion (replaced by the sequel – our review is coming soon) sporting substantially better ANC and a comparable sound performance. Still, the Club Ones edge an advantage when it comes to call quality, and the wired connectivity offers something distinctive that sets them apart.

Review based on a unit supplied by JBL.