JBL has been generous with its new line of wireless noise-cancelling headphones, best represented by the mid-tier Club 950NC headphones, packing a lot into its affordable A$399 price point. The reputable brand also leans heavily on its solid connections in the club world to distinguish the new series in a market that, in 2020, is seriously overcrowded.

Key to this distinction is the party-minded and playful ‘Bass Boost’ function, toggled easily with a button on the right earcup, which aims to lock the listener into an immersive sonic environment and appeal more specifically to bass lovers. That’s the idea anyway, but what I found is that the 950NCs are actually better when their party trick is kept under wraps. 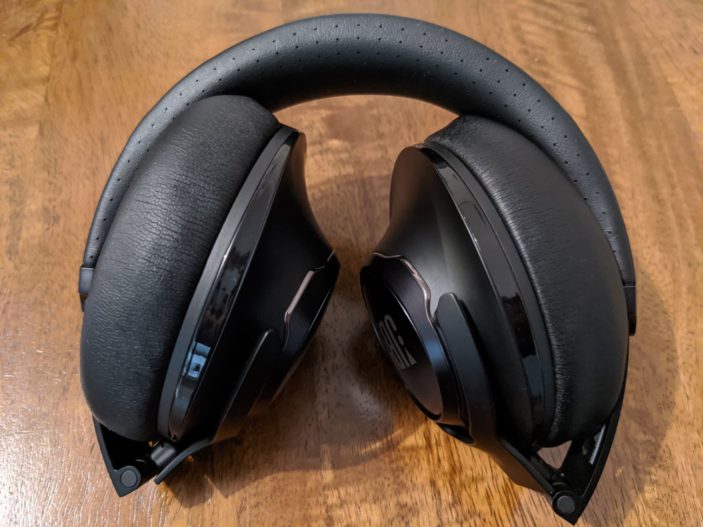 JBL isn’t breaking any conventions here. The foldable over-ear headphones look just like most on the market, with sufficient cushioning on the hard plastic earpads, a leather-esque headband and flexible black stainless steel arms. It’s a really sturdy build, even when the headphones are folded in to fit in the small but bulky hardshell carry case.

Although where some of the market’s front-runners (like Sony and Bose) have worked hard to achieve a lightweight design, JBL hasn’t quite achieved a feathery soft build quality to compete. At roughly 372g, they are far from the lightest on the market and so feel quite thick and uncomfortable on the head. In fact, they are a bit too firm, so longer sessions may start to strain, especially since the headband and clamp is incredibly tight.

This also makes it quite difficult to fold them in precisely so they fit comfortable back in the small case.

Although where JBL has got the design right is the unique magnetically attached earbuds, which can easily be removed and clean for those who want to keep the cups in tip-top shape. It’s a small, but welcome design choice but unfortunately isn’t enough to atone for the weighty build.

In terms of controls, you’re looking at fairly thick tactile, rubberised buttons that require hard presses, spread between both earcups. On the left, the main power button sits next to the Bluetooth pairing button and one that quickly toggled active noise-cancelling on and off as well as controls Ambient mode to allow external noise in under the music. The JBL logo on the left cup also acts as the headphone’s smart button, tagging in your chosen voice assistant (out of Alexa or Google Assistant) when need be. Notably, a 2.5mm headphone jack also sits on this panel, but given the thick design I’m not sure why they wouldn’t just have included the standard 3.5mm.

Move over to the right earcup and you’ve got the USB-C, volume rockers that also double as playback controls, a button to answers calls, control playback and summon Siri on Apple devices, and that distinctive Bass Boost button to instantly turn on the series’ defining feature.

The volume rockers are of particular interest here, and in an attempt to stuff as many onboard controls as they can, JBL has made the unfortunate decision to double-up the duties of these two buttons, meaning a long press will either skip forward or lean backwards on a playlist, while a quick press will control volume; as such, the two functions can be easily confused. This is doubly frustrating if you’re watching something on a streaming service and go to change the volume but accidentally (and easily) skip to the next episode. It’s much easier just to control these functions from your connected device.

It’s also easier to just use the clean, uncluttered JBL Headphones App, which is where you’ll want to be regardless to take full advantage of the nuanced EQ settings. Here you can also toggle on Talk Thru mode, which lowers volume so you can have a conversation without having to remove the headphones, and Ambient Aware which lets outside noise in under the music, without lowering volume. Both modes are standard and expected with ANC headphones in 2020, but they are certainly more accurate and detailed than other pairs I’ve tested, excepting more expensive ones from Bose, Sony and Sennheiser.

JBL have smartly used a dual-mic set up to ensure anyone taking calls on these headphones shouldn’t be disappointed in the quality. Clear voice is still an issue, even with higher end devices, in the wireless headphone market so it’s good to see that JBL is at least front-running when it comes to this small but necessary part of everyday use.

While design has its flaws, JBL has ensured excellent performance from these mid-range cans. The stock EQ is reasonably open and very well balanced, importantly avoiding distortion at higher volumes. This is a different story with Bass Boost activated, with the thing designed to enhance performance actually overshooting and ending up with a muddy signature.

Granted, Bass Boost does what it promises. It enhances the extended thump on sub-heavy songs like Big K.R.I.T’s “Ballad of the Bass” and accurately picks up the nuances on a complicated bassline like Mystikal and OutKast’s “Neck Uv Da Wudz”. Switching to the more natural sounds of The White Strips’ “Seven Nation Army” produces similar results, but it’s here, where instrumentals are more natural, that cracks start to show, stumbling when it comes to anything but the lower-frequencies.

It’s much better to have Bass Boost turned off. Instrumentals sound more natural and open, regardless of genre. A frenetic track like “La Rock 101” by Vitalic does have its impactful bass somewhat restrained, but everything just sounds more open and balanced. It’s also a no-brainer for softer styles like soul; my daily dips into Sam Cooke’s flawless discography highlighted just how well the headphones are at handling mids and highs.

Needless to say, don’t turn Bass Boost on for styles like jazz and soul; just don’t. It’s clearly a feature designed for club-ready music, but even then it can’t seem to handle the juggling act of more detailed EDM productions.

Bluetooth 5.0 maintains a strong connection to two devices at once, but there’s a slight delay when switching between both. Whereas in higher end models, the headphones are quick enough to keep that seamless connection, the Club 950’s making you wait a few seconds if the signal has to shift between two devices.

ANC performs exceptionally well for this price range. Higher frequencies in crowded environments can still find their way into your private listening session, so offices could be a pain (luckily we’re all WFH now), as will cafes with the various cutlery clinks. But chatter and traffic is reliably muted if ANC is working to its fullest.

With ANC off, these headphones can reach up to an impressive 55 hours of a battery life. I would easily get through two days without having to charge, although my daily usage has significantly changed due to the COVID-19 pandemic. I don’t catch public transport as often, and avoid rush hours, but knowing that the ANC reliably mutes chatter I see myself keeping it on for the commute. I’d easily expect a full day of use regardless, which is more than enough for most consumers.

At A$399, the Club 950NC’s from JBL play comfortable in the mid-tier space and best a lot of competitors with sufficient ANC, fantastic stock EQ, and a lot of flexibility. But the design is a literal and figurative weight on the pair’s otherwise fantastic value. And it doesn’t bode well for the headphones when you consider that it’s major selling point (Bass Boost) doesn’t work as well as it should.

Review based on a unit supplied by JBL.