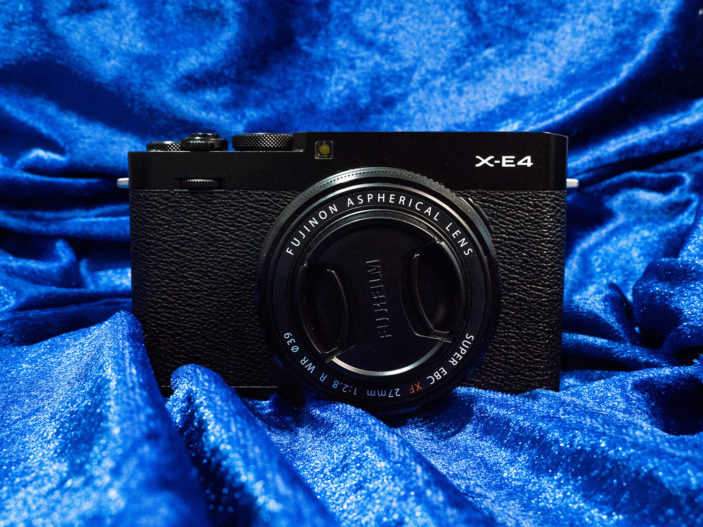 It’s little, it’s classy and it’s full of features – the Fujifilm X-E4 packs a punch, but it’s not without a few small drawbacks.

New to the market as of March 2021, the X-E4 is a 26-megapixel APS-C sensor camera. It has a tilting touch screen, high-speed burst mode shooting and 4K video capability, and it delivers on its claims of high-quality images. It also boasts Fujifilm’s 18 film simulation filter modes, for those who prefer to skip the digital darkroom or love the look of a particular film stock.

“Make more with less” is the X-E4’s tag line from the Fujifilm website, with lots of mention of how “no other device performs as well as a dedicated camera to capture memories in the highest quality possible”. At the same time, “we realise it’s not practical to carry a large, heavy dedicated camera wherever you go”. The X-E4 seems set to fill a gap between phone shooting and a larger interchangeable lens camera for photo enthusiasts and burgeoning content creators, but to use it to its fullest potential you’ll need to come at it with an existing knowledge of manual shooting.

Do you shoot manual though?

The X-E4 – like many others in the Fuji range – wears its exposure settings on the outside, and hides its shooting modes from beginners. You won’t find portrait/landscape/sport presets here; you won’t even find a wheel with shutter and aperture priority modes highlighted.

What you will find is an elegant and sleek body design that assumes your knowledge of the exposure triangle. A dedicated shutter speed wheel, a subtle ISO button and exposure compensation wheel all live centrally on the top plate. The aperture control is classically wrapped around the lens. If you know what all this means, you’ll be fine – but if you’re googling what “aperture” means, you may find find this camera has a steep learning curve.

On previous Fujifilm models with similar body designs to the X-E4, you’d need to change three separate settings to get from a full manual mode to auto shooting. You’d have to set the shutter wheel to the red letter A for auto, do the same with the aperture dial, and set the ISO to auto too.

Maybe I’m just a child of the modern age, but I prefer the convenience of a single dedicated auto mode that lets me activate it in a fraction of a second. I’m delighted to see Fujifilm have delivered on that in the X-E4 – the shutter wheel now includes a “P” setting, which can be used to quickly activate a fully automatic “program auto” mode. Thank you, Fujifilm! This is a huge timesaver and a great way to make the option available without sacrificing the classic Fuji design. I’m not convinced it’s executed as clearly as it could be – the A for auto is highlighted in red, while the other settings, including P, are all in black, so it would be easy to miss. I’d love to see it differentiated, even if it was in the same red as the A setting.

Why care about auto?

I realise as a pro photographer I’m supposed to say I only shoot on manual and never waver, but on a travel/hobby/play camera I do use automatic shooting modes. Nine times out of ten, they get me the shot I wanted anyway. When they don’t, I can take back control with exposure compensation, or switch to a manual or semi-automatic mode to get what I’m looking for. I like having a quick way to switch between the two, and after complaining about the lack of that on previous Fujifilm bodies, it’s great to see the P mode addition.

Aperture and shutter priority modes do also exist – you just need to choose them by actively setting the other two controls to their automatic setting.

Autofocus – is it Greased Lightning?

With 2.16 million phase detection autofocus pixels over 100% of the frame, and Fuji’s latest X-Processor 4, the X-E4 handles autofocus with brilliant speed and accuracy. I can’t claim to have tested its professed 0.02 second acquisition speed, but I agree that it’s fast, it tracks well in both photo and video modes, and I have no complaints.

Video features on the X-E4 are excellent as ever, with 4K shooting possible up to 30fps and slow-motion shooting modes in full HD up to 240fps. I do love a creamy 10x slow-motion moment, and the X-E4 executes it beautifully.

If only the video shooting mode was easy to reach! Lacking a dedicated record button, to shoot video you need to be on a specific video mode accessible from the drive mode menu. Once you’re in this mode you can use the shutter to start and stop recording, but you can’t access video shooting in any other mode.

Fierce video recording enthusiasts will be excited with the inclusion of F-Log recording and tally light, and the ability to shoot the camera and charge it at the same time via USB-C cable. There’s also a microphone input and hot shoe.

Long-form video shooters beware – you may run into overheating issues with this camera. After shooting in 4K at 25fps for around 25 minutes, the X-E4 switched off citing overheating, and I had to pause production until it had cooled enough to continue. If you shoot exclusively full HD video this may not be an issue, but 4K shooters beware.

So is this my new vlog camera?

I wouldn’t think so, no. While the flip-up screen can tilt all the way over the top of the body, it would block the use of a shoe-mounting shotgun microphone, and even a small microphone would block your view of the screen.

What are these film simulation filters all about?

Allow me to quote from the X-A4’s page on the Fujifilm website. “A legacy in color science is at the root of any image you set out to create.” It’s right there in their name – FujiFILM have been producing film and photographic tools for over 85 years. The way their cameras are built mirrors the film photography world they started in, so it makes sense that their cameras should be able to produce images that give the impression of those shot on film too. The library of film simulation modes continues to grow, with twelve now featured in the X-E4’s arsenal.

I like to shoot in RAW + JPEG, which is handy in this instance. While shooting with film simulations switched on, the changes are only applied to the JPEG version of the file, leaving me with full creative control over my RAW file – the best of both worlds.

Is she cute, though?

Fuji cameras are always classy pieces, with the X-E4 nodding to the look of rangefinder cameras of old. The minimalistic controls on the rear of the camera keep it from feeling overwhelming, and full black or black-and-silver colour ways will keep street photographers and flat-lay stylers alike very happy.

I tested it with the 27mm f2.8 lens and loved that such a small prime could keep the camera profile quite small too. Of course, it also works with the rest of the Fujifilm X-series lens range.

If stills shooting is your thing, the X-E4 might be the perfect choice for you. It’s powerful, it performs in all sorts of situations, and it looks and feels great in your hands. If only the screen flipped to the side and not the front, and didn’t overheat while shooting longer video content, this camera would have it all.

Highlights: Looks great, performs great across photo and video
Lowlights: Flip up screen bumps EVF, no video recording unless in specific mode
Manufacturer: Fujifilm
Price: $1199.95 for the body only (on Teds.com.au)
Available: Now