DJI is once again positioned as the go-to brand for smartphone-friendly gimbals with the OM4. Sure, it’s largely an iterative improvement over its highly successful predecessor, but the small changes bring a few neat design tricks and a refined feature set, attempting to not only attract new fans, but justify the bump up for those who already own the Osmo Mobile 3, which is only just over a year old.

The Osmo Mobile 3 was so well received that it’s not a surprise that DJI developed a follow-up so soon, but with content creators in as much of a lull as the rest of the world given the 2020 pandemic, it feels like the 3 didn’t even have a chance to breathe before we were hit with its slicker younger sibling. That’s no complaint, seeing as I don’t own a 3, and have only been able to play around with one a handful of times, but those who rushed for one when it was released last year probably won’t be so quick to make the switch for that reason.

Though if they decide to upgrade, there’s several meaningful changes waiting for them, as the OM4 is easily the best smartphone gimbal on the market right now, even if it leaves some room for improvement. 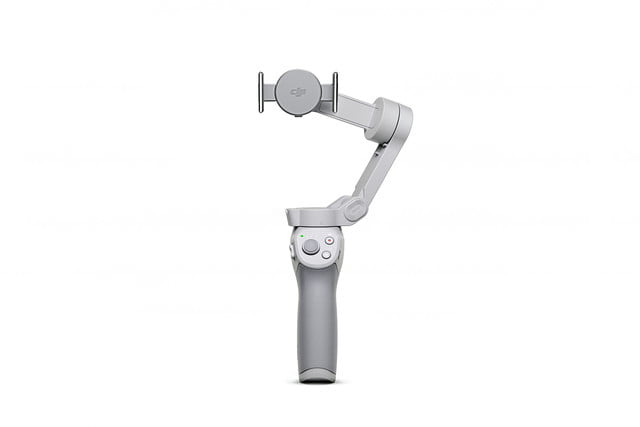 There’s really only one significant difference over last year’s model, and I’m not talking about the casual name change. The OM4 now relies on a magnetic attachment system to secure any smartphone to the robotic gimbal arm, edging the price upwards but offering much more convenience for a more seamless experience when inspiration strikes.

Other than that, the 4 is lighter in colour than the 3, and the position of the buttons is slightly different and cleaner in its look. The small joystick used to control the arm, for example, has a better grip which makes it much easier to swiftly sustain the slow movements so critical to panning shots.

But it’s the magnets that get all the attention here, allowing you to quickly attach and detach a phone without the hassle of snapping it in and out of a static clamp which, while not frustrating for casual users, could easily cause a busy content creator to miss precious seconds of a fleeting moment. The magnet solves this problem, and DJI’s design team was smart enough to include two different options to take advantage of the new attachment system. 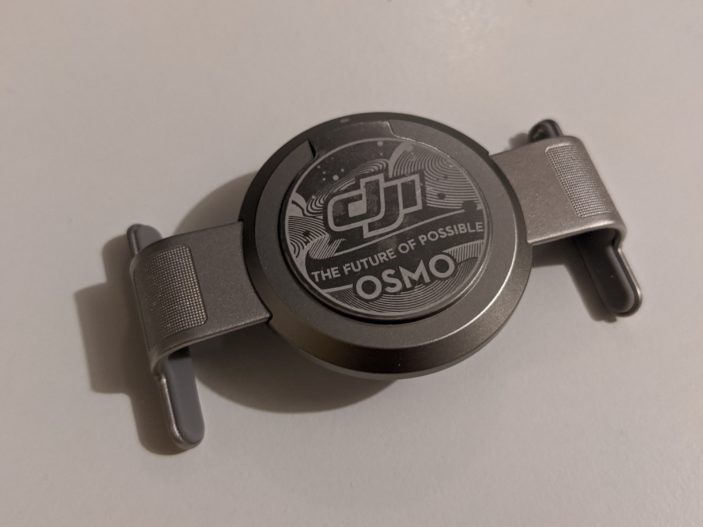 There’s a popsocket-like magnet you can stick to the back of the phone permanently, with a ring to help with grip when the gimbal isn’t in use, or there’s the conventional claw-shaped mount for those who don’t feel like attaching anything that can’t come off – at least not with a lot of effort – and just want something the clamps around the phones edges to hold it securely in place. The latter is the better choice, given hardly anyone sticks with the same phone for more than a year these days. It’s my preference given I’m often using three different phones when I’m out capturing content (right now, that’s the Google Pixel 4 XL, Oppo Find X2 Pro, and Huawei P30 Pro) and frequently switching between the three.

During my test with the OM4 I mainly used the Find X2 Pro as, aside from the Pixel’s unbeatable portrait mode, it’s the better camera overall and takes stunning video.

The problem is that not all Android phones are able to take advantage of the OM4’s full range of features. The Pixel and Find X2, for example, unfortunately can’t access the OM4’s slow-motion feature – despite the X2 Pro featuring some of the best slow motion recording this year – but the P30 Pro can do it all, and then some. The compatibility is confusing and I hope this is something that can be improved with subsequent models, especially since competition is only stronger in 2020 and there are more people spread across the different brands. If you’re an iPhone user, you’ll be happy to know that compatibility is pretty much no issue for anything as far back as the iPhone 7. The full list of compatibility can be found here.

The 3-axis stabiliser motors that drive the OM4 feel smoother, more flexible and stronger this time around. Weight shouldn’t be an issue as such, unless you are attaching a phone with a bulky lens attached or a foldable like the Samsung Galaxy Z Fold 2. Although be sure to download DJI’s essential Mimo smartphone app before you attached the phone, as maintaining the Bluetooth connection between both devices is the only thing that’ll keep it functioning properly. Otherwise it just flops around and you’re left with a bad first impression.

Although its all plastic, the build quality is really solid and everything is optimised for one-handed use. It’s easy to quickly switch functions on the fly with any number of button presses, although this is a learning curve that may take some climbing for newbies. The various on-board physical buttons control zoom, record on/off, and switch between portrait and landscape mode in an instant. There’s also a trigger which locks the phone into position on one press (and hold), as well as activates the handy Active Track feature, re-centres the gimbal, and toggles the rear and front camera modes depending on the number of presses. 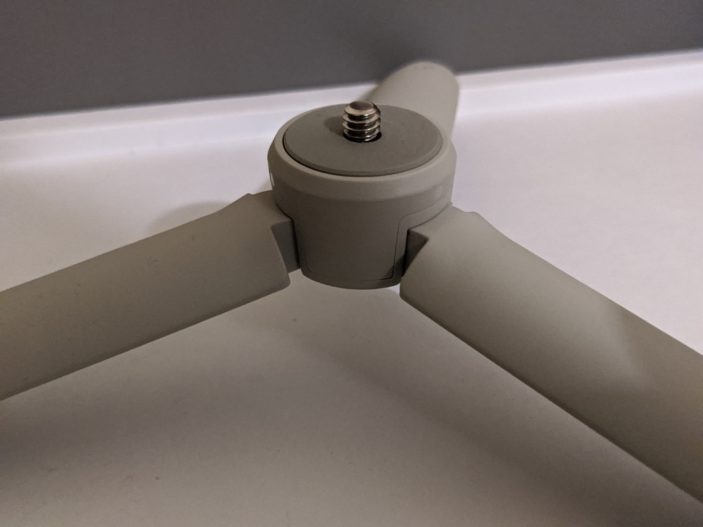 Also notable is the decision to include a small tripod that can easily screw onto the base of the gimbal. With previous models, this tripod was sold separately, so it’s great to see DJI accompany the bump in price tag with something so essential.

Information about all design and features can be found here.

All the controls work beautifully and without issue, although switching between rear and selfie cameras is often met with a slight second delay which could prove annoying for the more impatient content creators. Regardless, there’s never been a more seamless way to nail impressive camera movements and recreate panning, crane and dolly shots with little effort.

That being said, auto-tracking doesn’t work as well in low-light situations, especially when taking selfie video. In all other situations though, the tracking is seamless and impressive, following a chosen subject with fluid movements that don’t look jittery or awkward on the final result.

The side scroller to control the phone’s zoom is limited to what the Mimo app is capable of. So even though my Find X2 Pro is capable of up to 60x digital zoom, what you actually have access to is only up to 10x. Of course, 10x is more than enough for most situations, but not being able to take advantage of the full feature is disappointing.

DJI have also made some meaningful improvements to the Mimo app, which make all the difference to how flexible to OM4 is. For example, there’s now a Dolly Zoom feature, spilling over from the DJI Mavic 2, which allows you to zoom in while pulling the camera away from the subject, giving off a really old-school effect that mirrors classic films by Hitchcock and Spielberg. Never before has a smartphone user been able to easily access this disorientating, vertigo-like shot, so it’s an extremely valuable feature to master for content creators.

Another new feature is the Clone Me panorama which is fun to play around with, essentially allowing you to appear in three different frames of the same panoramic photo. The quick reflexes of the arm come into major play here, shifting each time a four-second countdown results in a shot so you can easily run over and get ready for the next one before the app tapes it all together for you.

Story Mode is likely to be the favourite for most beginners, making it much easier to create swiftly edited, smooth videos that tell more of a story, programming it certain panning movements that can be stitched together for brief flashy videos. Media professionals looking to make quick videos for social media will find the most value out of this, and so far I’ve been impressed with just how easy it is to put something together without time-consuming editing software. Albeit, the majority of my content (actually all of it) comes from press junkets when I’m out on the road. 2020 has made it a bit difficult for that.

The most popular modes from the Osmo 3 are recreated here, ranging from the spin shot and timelapse to sports mode and the more fluid hyperlapse and, for compatible phones, 4x/8x slow motion. Thanks to the strong and responsive motors, all these features work remarkably well, even if you’re just needing a stable hand for shooting hyperlapse sunsets almost everyday (guilty).

The OM4 has some impressive stamina, and you’ll find that it often can outlast a smartphone battery, with up to 15 hours on a single charge. It charges quite fast via USB-C as well, with a 2.5 hour charge taking it all the way up to 100%. That’s pretty much the same as the Osmo 3, and while it’s slightly disappointing to see the price tag rise without any marked improvement in alleged battery life, 15 hours is a lot.

The design also keeps a USB 3.0 port on the gimbal easily accessible at all times so you can transfer some juice from the OM4 to your smartphone if need be. This ability to double as a power bank is crucial for people like me who are usually on the road for press junkets (I’m just pretending 2020 doesn’t exist right now) and often forget to keep everything topped up each day.

While the hardware may not be the kind of upgrade-worthy temptation to lure Osmo 3 users away from their still relatively new toy, the OM4 is an absolute beast of a smartphone gimbal and easily the best on the market. For those who want to milk the most out of their smartphone’s camera, this is as good as you can get right now. And with the Mimo apps additional tricks, DJI has given users more than enough to efficiently up their game when it comes to creating engaging and creative video content.

Although in order to get the most value out of it, you should ideally already own one of the phone’s that is compatible with the full suite of features. Otherwise, you might have to wait for some firmware updates before making that final decision.

Highlights: Excellent and seamless movements; auto-tracking feature works consistently well in the right conditions; great battery life and can act as a power bank; great build quality and excellent button layout.
Lowlights: A good number of Android phones are still not fully compatible with all modes; auto-tracking feature not as good in low-light; limited zoom.
Manufacturer: DJI
Price: A$239

Review based on unit supplied by DJI.