It may seem a bit too novel – and it is in a way – but Bose Frames represent an important evolution for one of the world’s leading audio companies. It’s understandable that the first move in a brand new tech genre has its misgivings.

Released earlier this year, Bose took a break from their slick award-winning noise cancelling headphones (although that was still to come, at the time) to focus on delivering a hybrid headphone and pair of designer sunglasses that, importantly, didn’t feel gimmicky. 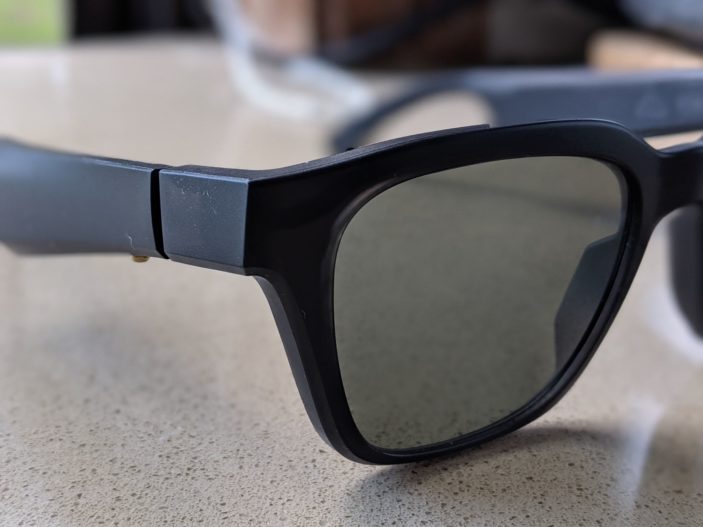 While sound is the most important thing here, a design which follows function clearly kept Bose’s team awake at night. They must be commended at balancing between aesthetics and performance so well – something which could have easily gone wrong, and proven a disaster for Bose’s AR line.

They look similar to most other plastic-framed sunglasses, with tinted lenses and the option of two different styles. The square-framed Alto is obviously designed after a classic pair of Ray-Ban Wayfarers, for a sleek and modern look. While retro lovers would probably prefer the more circular and smaller Rondo style.

Both styles only come in a matte black plastic, and both are defined and weighed down by the slightly bulky – although, understandably bulky – arms that hold all the required technology.

It’s the most expensive pair of cheap looking sunglasses you’ll ever own, although I wouldn’t go so far as to say these are ugly. Perfectly fine for everyday use, even without music playing, they offer a great deal of visual clarity, Bose claim they block 99 percent of UVA/UVB rays, and you can just shrug the bulky arms off as a stylistic eccentricity.

Lenses (sold separately) are interchangeable, but the options are limited to mirrored silver and blue, both of which contrast with the matte black plastic a bit too much. If you are going to pop these lenses out, it’ll be for prescription lenses.

A low IPX2 rating means you’ll need to keep these fairly dry, which shouldn’t be much of a concern since you’re unlikely to be wearing these in the rain. You shouldn’t, however, risk taking them into the pool, which does limit the use of a device meant for listening to music outdoors.

You’ll find a tiny, sensitive, gold button under the right arm of the sunglasses. This is the only physical control on the actual device, and is mostly used to control playback (play/pause), answer incoming calls, or access a voice assistant – all functions called by various taps. There is absolutely no other use for this, which means volume control has to be done through the paired device.

More often than not I found myself accidentally pressing this button when adjusting the Bose Frames, which is an issue. I assume further iterations on this product line will experiment with actual placement of the button.

You’ll notice there’s no actual power switch on the device, as they are turned off simply by positioning them upside down for a few seconds. This isn’t as sensitive as the gold button, so accidentally turning them off isn’t an issue. 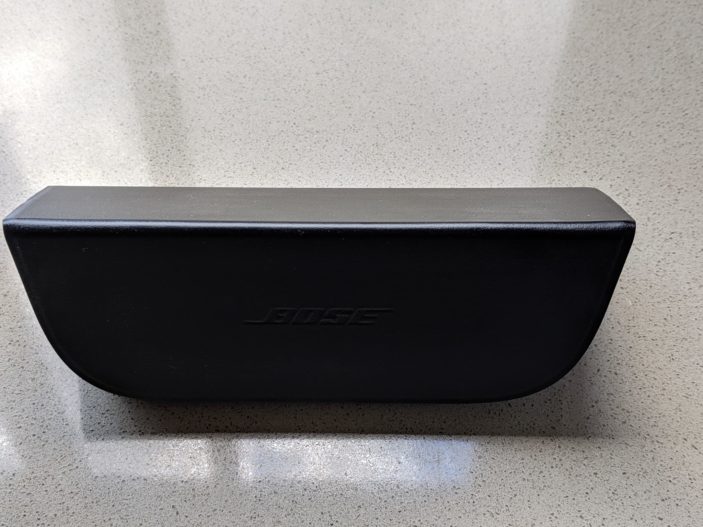 You’ve got an LED indicator on the inside of the frame, which shows battery status after charging with the proprietary magnetic USB cable that fits into the inside of the right arm. Battery is a huge oversight here, offering only three hours of continuous play with no added boost by a charging case.

Given that mostly all truly wireless headphones on the market know come with a charging case, offering consumers pretty much an entire day of use, this falls way below the mark.

Although I do like the case itself. It’s design is similar to most cases you’d get with a pair of designer sunglasses, just a bit thicker, with inside framing to support the sunglasses.

Considering the Bose Frames can only fit two small directional speakers, the device doesn’t sound as bad as expected. Although the company made the odd choice not to go with bone conduction, which would have added a bit more body to the sound profile.

The tiny speaker grilles do a decent job at amplifying sound, delivering it straight to the ear. The overall profile is warm and benefits from plenty of clarity, but can sound rather flat with very minimal bass and almost no punch, no matter the genre. They are best for those who only want background music while they are outdoors basking in the sun.

Remarkably, sound below 50% can’t be heard by anyone sitting next to you. This is surprising for a speaker that’s still out in the open without being sealed around your ear. Although you’re unlikely to want to go above half volume anyway, since distortion is common with muddled sound and a lot of sound leakage.

The included microphone is better at picking up and conveying your voice over phone calls than most of the wireless earbuds I own. And that’s definitely something that works in favour of the Bose Frames, although louder environments would be a bigger issue.

I had zero issue with the Bluetooth connection as well, which is something I can’t say for many other wireless devices. There was no sputter, even when I was walking at a faster pace, nor did I have any drop out between use.

While Bose’s nascent AR platform can do with more features and functionality, the Bose Frames are able to access the limited program easily and efficiently.

Having the glasses know which direction you’re facing when using GPS is probably the best use so far, but until the company’s AR platform offers more practical experiences, it’s not worth paying much attention to.

Bose have impressively given us a novelty hybrid that doesn’t sound like an afterthought. Though it lacks the punch to choose these over similarly priced wireless headphones, there’s still some great uses for the Bose Frames that take them beyond any notion of gimmickry.

Anyone who just needs background music while paying attention to ambient sounds would benefit the most from these. And when the company start rolling significant updates to their AR platform, the smart elements of these glasses will also help justify the asking price.