Few personal audio devices have seen such a massive leap on quality in recent years than true wireless earbuds. The careful juggling act between sound quality, battery life, connectivity and comfort has been nearing perfection with recent releases from Sony and Sennheiser. Although those two focus on just being lifestyle buds, with little consideration for exercise buffs who need a pair that stays absolutely still, despite the jolts and shocks that come with the territory.

Here’s the niche that Beats’ Powerbeats Pro handles like a charm, and it says a lot of that the pair is still one of the best sport-oriented earbuds available, despite being more than a year old.

With Powerbeats Pro recently receiving a new coat of paint via several brightly coloured iterations, the buds have rightfully been back in the spotlight. Spring Yellow, Glacier Blue, Cloud Pink, and Lava Red are the four new eye-catching paintjobs, each bold and statement-making, which goes against the minimalistic design trend adopted by most other brands. 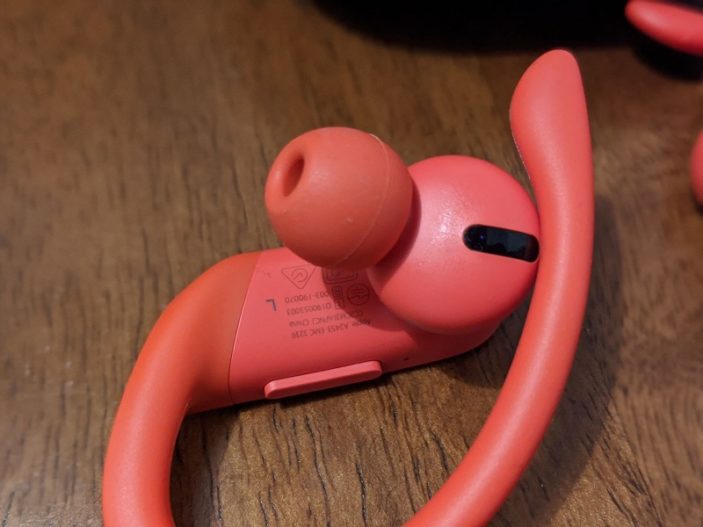 My Lava Red pair is more of an orange tinge to it, solid except for the shiny black Beats logo on the buttons of each piece. Aside from that, nothing has changed on the design that was first revealed last year. They are appropriately sporty with a genuinely premium feel to them, attractive enough to wear from day-to-day, but also practical for the gym.

Central to this is the fact that they never seem to shift in your ear, even just an inch when you’re jumping around. They are supremely comfortable with their thin and unobtrusive rubber earhooks, although getting the right fit may take some jiggling around at first seeing as the actual buds are positioned at a rather sharp angle. Hint: position the earhook first and then worry about the earpiece.

An IPX4 rating is reliable enough when it comes to sweat and splashes of water, but you won’t want to get these things wet. You certainly aren’t going to want to charge them until they are dry, or expose the charging case to any liquid as it’s not water resistant.

Speaking of the charge case, its quite large when compared with competitors. The shapely rounded square is an attractive black, looking sleek with the Beats logo imprinted in the very centre. But it’s definitely not pocket-friendly. Lift the lid and the earpieces slot in side-by-side with a satisfying magnetic pull.

Beats’ grace design feature is barely noticeable and seems like it wouldn’t make much of a difference, but it’s said to significantly improve comfort. That’s the micro-laser barometric venting hole in the front chamber of each bud. Marketing term, sure, but seemingly the reason why you won’t get that uncomfortable in-ear pressure some other buds can give you during playback.

That venting hole is also said to improve bass response, but whether the excellent bass profile can be credited to it or not is besides the point.

I actually prefer the Powerbeats’ tactile control buttons to the touch-sensitive smart panel on both pairs of earbuds I mentioned above (Sony and Sennheiser).

A common annoyance with the touch panels is often easily confusing the pause and skip track functions, which are typically differentiated by one tap versus two taps. If the second tap doesn’t register, or if you do it too fast, then the music pauses and your seamless listening experience disappears, albeit briefly.

That issue is non-existent with tactile buttons, which control playback (pause/play/skip/previous track). Volume rockers are located on each piece above the main button, both performing the same function in that you click the rear for decrease, the front for increase.

A single press of either logo button also answers/ends calls, which are clear and largely unaffected by reasonable environmental noise. The buds don’t actually the microphones most do, instead making use of long-range optical sensors to clearly pick up your voice. You can hear the caller clearly, and they can hear you just as well. 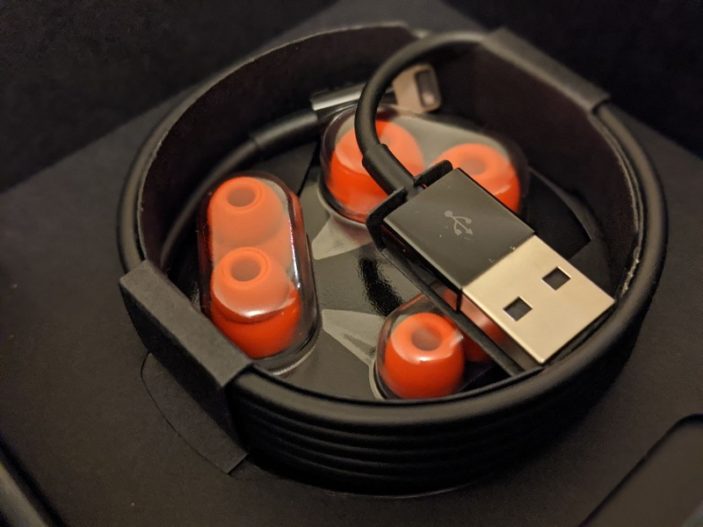 Apple’s involvement also means that these play remarkably well within that ecosystem. Pairing is almost instantaneous, and you can simply wake Apple’s assistant with “Hey Siri” whenever you want. The connectivity with an iPhone works beautifully, but there are very few issues with Android devices as well. I recently broke my iPhone (so tested it out with a family member’s), but I had no issues using this with what is now my daily driver, a Google Pixel 4 XL.

Those with super large ears may struggle finding the perfect seal, but most sizes are covered by four different ear tips. The nozzle is also notably slim when compared to competitors, which help with the overall fit. 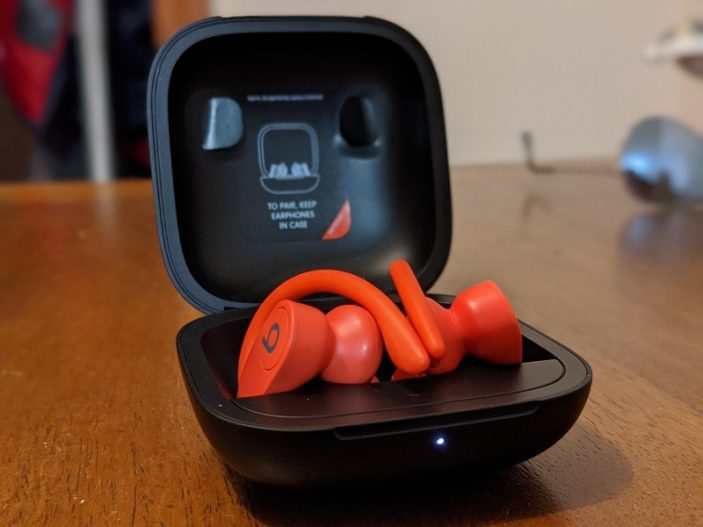 Audio performance is remarkably nuanced. You wouldn’t expect much less. Apple and Beats make a formidable team, with both regularly knocking it out of the park when it comes to designing these audio profiles to capture a tremendous amount of detail and present music as the artist intends. Powerbeats Pro is no exception. While Sony’s WF-1000xm3 are still the one’s to beat as far as audio goes, these aren’t far behind.

Although the Sony’s come with more connectivity sputters than the Powerbeats do. Here, you’ve got a reliably stable connection necessary for the work-out crowd. I wouldn’t say connectivity is perfect though, as I’ve had the rare occasion where blips were constant while jogging or having the phone in the back pocket. This isn’t an uncommon issue with all modern Bluetooth earbuds though.

Back to the sound. The heavier-than-heavy drums on “A N***a Witta Gun” (Dr Dre) and the spasmodic bassline of “Neck Ov Da Wudz” (Mystikal) are both maximised to their utmost potential with these. Those are two of my go-to songs when I’m looking to test a speaker’s bass, and to hear them rattling around with these was more than enough to reiterate Beats’ reputation for fidelity. Other songs like the bass-test intro of “In My Life” (Juvenile) and “A Change is Gonna Come” (Sam Cooke) both show off different sides to the range, that being impeccably nuanced bass, right up to a crystal clear upper register.

Stadium-sized EDM like “What Else Is There (Trentemoller Remix)” (Royksopp) and “&Down” (Boys Noize), with their decidedly large and epic warbles, aren’t as sharp and metallic, which is a good thing, as they are tamed with a warmer sound and sound much easier on the ears at high volume. “Maggot Brain” (Funkadelic) and John Coltrane’s “A Love Supreme” highlight the excellent separation even further, really opening up the tracks and delivering them in perfect form. 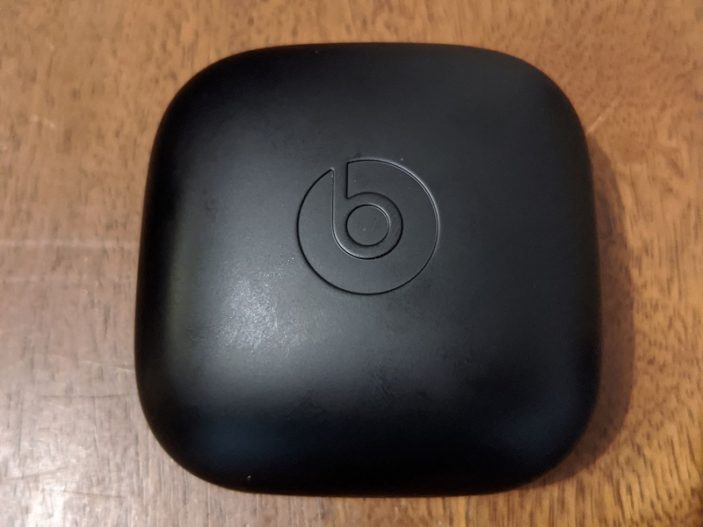 It’s disappointing that Powerbeats offer no EQ. That’s confidence right there, but it would still be nice to be able to individualise audio profile for those with different tastes. The default sonic signature is good enough that it doesn’t really need tweaking, though with competitors offering this option, it’s still an oversight.

There’s also no noise cancellation. That’s a real shame, since other buds are placing heavy focus on nuanced ANC and highlighting just how much more it can bring to your overall personal audio experience. I would think Apple’s H1 Chip, which is used here as it is with the latest AirPods, would be able to handle ANC quite well.

I don’t own a pair of AirPods so can’t speak on those, but the Powerbeats don’t even have good passive noise-cancelling, which is annoying if you want to listen to music at a lower volume on public transport but still want to be locked into your own private audio session.

Unlike the latest AirPods, there’s no wireless charging for that aforementioned case. I do think this will change with the Powerbeats Pro 2, but this is frustrating, particularly for Android users. The case requires a Lightning cable, so those USB-C cables you’ve got in abundance won’t do. Android users will need to carry around an extra cable, although this isn’t unexpected. It is an Apple product after all.

The promise of 9 hours battery life is consistently accurate, even with constant use. A full charging case holds enough for 2 additional charges, bumping that number up to 24-hours. You won’t have issue with these at the gym, but you should be charging the case every few nights just in case.

The Powerbeats Pro earbuds are not perfect, but they certainly come close. Sound is up amongst the best you’ll find at this price, with a strong battery and high quality build. Although they go against more attractive minimalist design, these things are supremely comfortable in the ear, and they are remarkably secure in the ears for those who go hard on their fitness schedules.

At A$349.95, they are only slightly cheaper than the gold-standard Sony 1000XM3’s, but they certainly justify the barely-there difference by edging out competitors when it comes to comfort and fitness. As such, these are probably the best buy on the market right now for those who are looking for earbuds appropriate for use while exercising.

Review based on a unit supplied by Beats.