I’ve always loved the theatricality of music; that indescribable feeling it can provided when presented with a bit of bombastic flair. But I don’t know if I’ve ever seen a production bring so much life to its soundtrack, as David Byrne has achieved  with his American Utopia show – which is currently enjoying a 16 week or so run on Broadway. It’s an enhanced version of what he brought to Australia last year, flexing his incredible catalogue of music from Talking Heads and beyond – including the show’s namesake, his ninth solo outing. 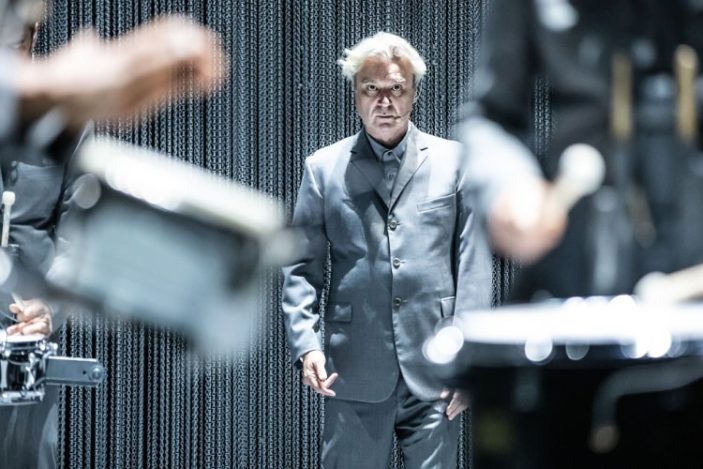 This show doesn’t just take the songs you love and fill them with a set of incredible light, design and choreography, but it elevates them. Classics like “Once in a Lifetime”, “Burning Down The House” and “Road to Nowhere” become superior to the originals.

I sat there with a grin from ear to ear from the start to the finish – even through songs I didn’t know – and the result is a production you just don’t want to end. What pure joy it was. In short, American Utopia sets the bar inordinately high for what can be done on the stage with great music, some spectacular lighting designers and an idea so simple, it’s amazing no one had done it before: What if the only thing on the stage, were the people you came to see? 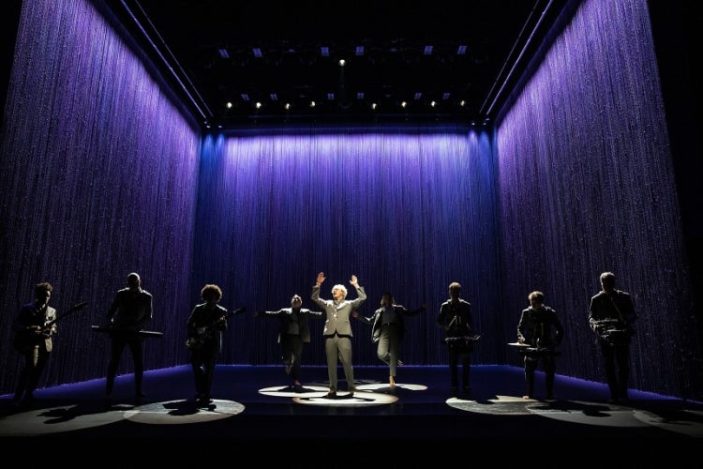 And that’s just what Byrne has done here, leading his 11 piece ensemble unencumbered and untethered, acting as something of a pied piper. And they deliver all their music live, alongside some superb, playful choreography, especially in the brilliant “I Dance Like This”, which felt made for this very stage. 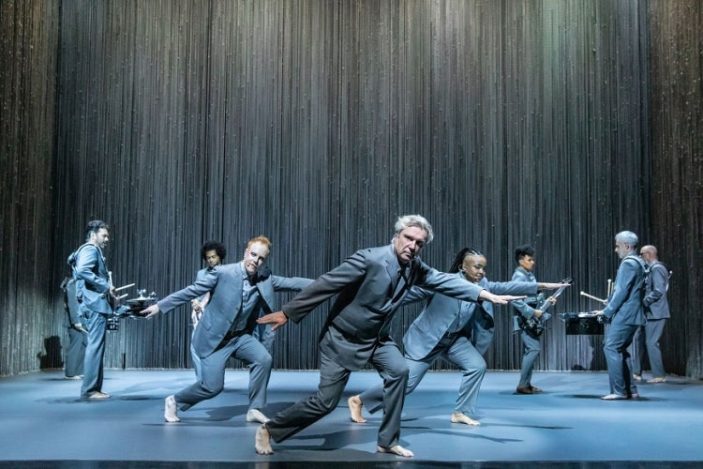 Upon seeing the show, I caught up with two of American Utopia’s lead producers, Kristin Caskey and Patrick Catullo, who helped bring the show to Broadway. The first question that came to mind was just on the seeming once-in-a-lifetime nature of the show. The idea of an artist residency is nothing new, even on Broadway (The Artist in Residency series, and Springsteen’s recent run being of particular mention); but this idea of taking an existing touring show – already theatrical in nature – and placing it on a Broadway stage for 16 weeks feels totally fresh. I asked Caskey and Catullo if there was any precedent, particularly in contemporary music, and as far as they were aware, this truly is unlike anything Broadway has ever seen.

They told me, “Not that we know of. A lot of the aspects of this show are very singular and not like other things on Broadway. We both had such a strong response to it when we initially saw it that precedent or not, it felt like it belonged on Broadway.” 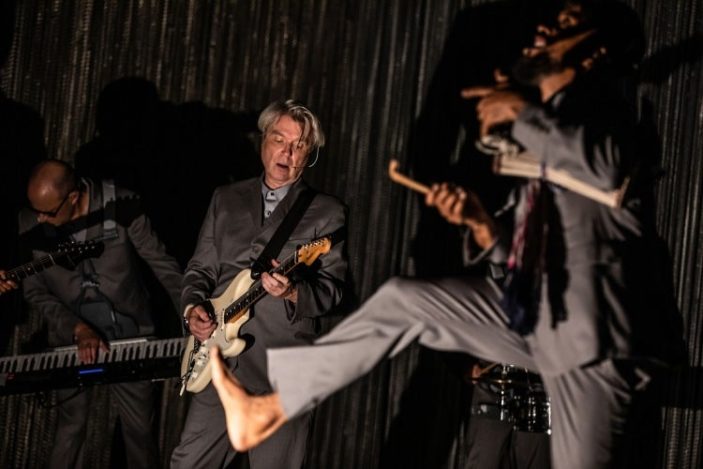 When you see the show you may ask yourself, surely this production was always the endgame for Byrne’s touring run of Utopia – that made it to Australia last year? But it turns out, it was “definitely not”. Caskey and Catullo continued, “David had been touring the show around the world and, at some point, he and others realised that there was a bit of a story that he was telling. And it was pretty clear that the show was theatrical in nature. So David and others began thinking that maybe Broadway would be a good place for it.”

So when did this pair come on board? “When David and others began thinking that maybe Broadway could be a good place for the show, his agents invited producers and some other key industry folks. Patrick had already had tickets to go with friends to see the concert in Forest Hills. Kristin saw the show at the Kings in Brooklyn and came back the very next night. David subsequently met with both of us, at the time independently, and put us together and we and Mike Isaacson had already known each other and were thrilled to produce it together.”

You’d have to imagine there were both advantages and challenges to take a show like this and place it on Broadway – compared to a more traditional musical or play.

“Well, David was always pretty confident that his fans would come to see him. And they definitely have. He also suspected that there were a lot of his fans that would come to a comfortable Broadway theater that might not ordinarily go to concerts. But the secret hope was for people who maybe aren’t as familiar with David’s work, or only knew some stuff, to come because they heard it was a good show. We knew from the minute we saw the touring show that the piece was thrilling on every level and the caliber of the work belonged in a Broadway house. And the opportunity to have an experience like this is such an intimate house was crazy exciting to everyone.” 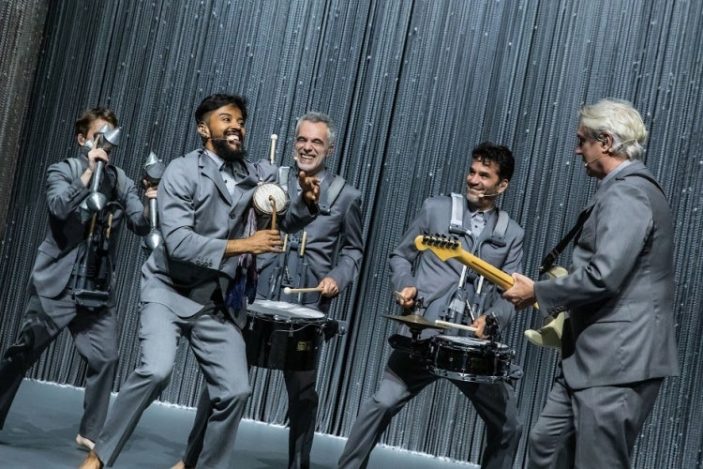 I didn’t get the chance to see the show in Sydney last year, so I was curious just how much of the show had changed. Indeed, extra production had been added that was possible on a permanent Broadway stage, though the aesthetic and heart of the show remains the same.

So what did evolve? “David and his genius creative team definitely worked to develop the piece a bit, narratively,” Caskey and Catullo told me. “They cut some songs and added others. David always had a “story” in his head and the chance to do the show for Broadway gave him the opportunity to continue to shape it. Also, David and his collaborators worked on the order of the songs to build the show and the Broadway version definitely has a momentum in the way the feeling of it just builds so beautifully.”

As a fan of music, the idea that a show like this could encourage others to follow suit is incredibly exciting. Can you imagine if Beyoncé brought her Coachella set to Broadway for three months? Everyone would lose their minds! For a long time Las Vegas has been the home for residencies like that – but some shows just belong on Broadway. And Caskey and Catullo agree that the future possibilities are endless, “We always love the notion of Broadway embracing diverse talents. It expands the idea of what’s possible.”

David Byrne’s American Utopia is at the Hudson Theatre in New York City until 16th February 2020. Get your tickets HERE.

While in New York City we stayed at the boutique hotel Moxy Times Square, just minutes walk from the venue.

The author attended the concert and travelled to NY at his own expense.