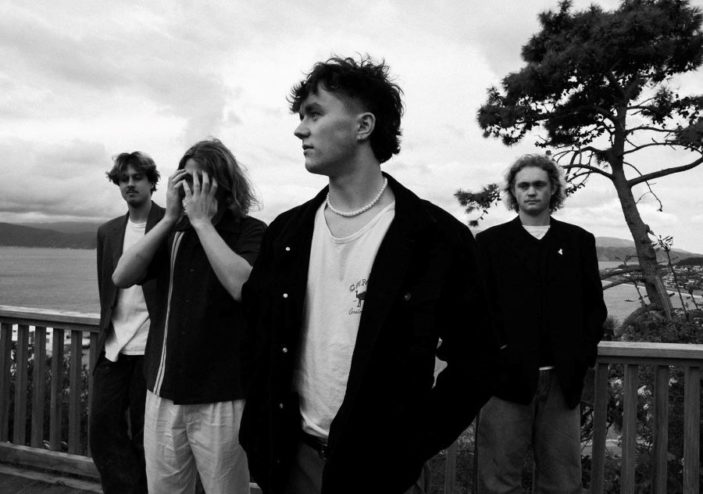 Indie-quartet Wet Denim hail from Wellington, which is undoubtedly one of my favourite towns in New Zealand. A number of exciting bands have emerged from NZ in recent years and Wet Denim are part of the latest crop. Today they have released the single “Free”,  an exciting follow-up to their debut single, “Another Hit” which dropped in August.

The band is comprised of Nick Goodwin, on guitar and vocals, Luca Crampton on guitar, synths and keys with brothers Jack and Joe Ledword on the drums and bass.

“Free” is a track glistening with jangly guitars, a driving beat and punchy lyrics. It swells and builds, bristling and surging, with the emotive lyrics holding it in check.  It’s potent indie guitar pop.

About “Free”, Nick writes: “The lyrics talk about a time when I was feeling very secluded from the people around me both mentally and physically. I had just come out of a very short but intense relationship paired with having a tough time with glandular fever so was spending a lot of time alone”.

The band has burst out of the blocks in the short time they have been around. They moved to Wellington to establish themselves musically, and have already sold out two headline shows. They are currently working on their debut EP.

The track was produced by the band, with help from the multi-platinum-selling group, Drax Project.  Neil MacLeod mixed it and the track was mastered by multi-award-winning engineer Chris Chetland (Dua Lipa, Snoop Dogg, Joel Little/Lorde).

For a band that is very much in its infancy, they’ve put together a short list of why New Zealand is a great place for bands such as themselves. So, check out the video for “Free”, crank up the volume and read on.

1. We love the sense of community that the New Zealand music scene has, especially the local Wellington live scene. We love sharing the stage with people, and then bumping into them on the street or at a party days after.

2. The awesome sonic diversity. Thursday night we can see fresh RnB fusion Girl Best Friend at The Rogue, then Friday night grab a few drinks from our drummer Jack working at Club 121 whilst having a boogie to Leon Murphy’s house set, whilst rounding off the week on Saturday we can mosh to local pop rock band Haven at Valhalla.

3. The epic network of creative talent behind the scenes –  graphic designers, videographers, photographers, promoters, and so many more. Without them, the scene would cease to exist.

4. The supportive venues. Venues within Wellington such as Meow, Valhalla, Moon Bar, and San Fran, give local up-and-coming artists a platform to perform and grow their audiences.