We may not be able to cram crowds into local gigs right now, but that isn’t stopping some unique live sets from going down. As part of the currently ongoing “Sailor Jerry Sessions” gig series that’s moving around Sydney, local grunge outfit The Dead Love made a return to the live music circuit last week with a short set at inner west favourite The Tattoo Movement, while getting inked themselves.

Only a handful of fans got to actually go to the concert, with tickets including a free tattoo for each attendee, but it was streamed live on Sailor Jerry’s social channels and highlights a potential for more gigs hosted by small businesses while the more conventional music venues remain largely closed. 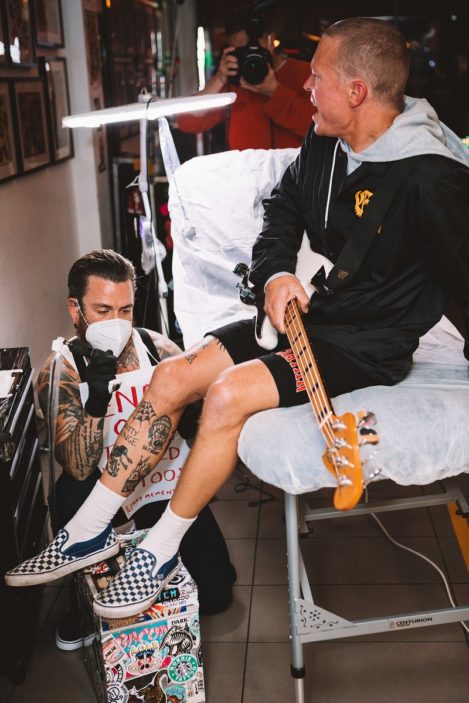 So what is it like rocking out while getting inked and trying not to fuck it up? We caught up with The Dead Love’s Clint Osso for a quick Q&A to find out.

Not every band gets to perform while getting inked. Going into it, did the situation influence your set list at all?

Not really, the vibe was always to figure it out on the night. I kinda thought I’d be sitting down the whole time, but turned out we had a couple of tunes with no backing Vox in a row. I just cruised over and got it put in whilst playing them. That was sick because we got to play most of the show all together, felt almost like a normal gig again.

What was the most difficult part about it all?

Well we’d only had one jam in like 5 months, so getting through the songs without fucking them up was the hardest part. It probably didn’t help the most challenging song to play matched up with the time I got tattooed, but maybe it did cause I just focused on that.

What tattoo did you end up getting?

An old School SJ horseshoe with “GOOD LUCK” in it. I thought it was a pretty ironic choice under the circumstances. NO RAGRETS.

The Sailor Jerry Session gig series rolls on in the coming weeks with The Polish Club and Eat Your Heart At playing some of Sydney’s best small bars. For more information click here.