WA gets Out Of The Woods with Angus & Julia Stone, Ball Park Music, The Jungle Giants and more

As Western Australia prepares to open up to the rest of the country, Macro Music has announced the Out Of The Woods festival in Busselton in the state’s south-west region for April featuring Angus & Julia Stone, Ball Park Music, The Jungle Giants and Hot Dub Time Machine.

The two-day festival, scheduled to run on Saturday-Sunday 23-24 April 2022 at the Busselton Foreshore, features more than 40 artists across three stages and two days.

It’s a major event for WA, which has been starved of travelling artists in recent months due to the state government’s hard border rules.

The news comes after it was confirmed Groovin’ The Moo festival was not returning to WA next year, having traditionally visited Bunbury, 50km north of Busselton, as part of the national circuit.

Thundamentals, Hermitude and Hot Dub Time Machine will bring the dance vibes and there’s much more to punters to dine out on, with Baker Boy, The Bamboos and Children Collide among the 40-odd billing.

Angus & Julia Stone posted on Instagram: “So excited to announce we are playing @ootwfest ’22 on April 24 in Busselton WA! So many great artists are joining. Check out it all out at OOTWFest.com Can’t wait to see you all over there!”

Out Of The Woods takes place at Barnard Park at Busselton Foreshore on Saturday-Sunday 23-24 April.

Tickets on sale from 4pm WST on Thursday 9 December via this link. 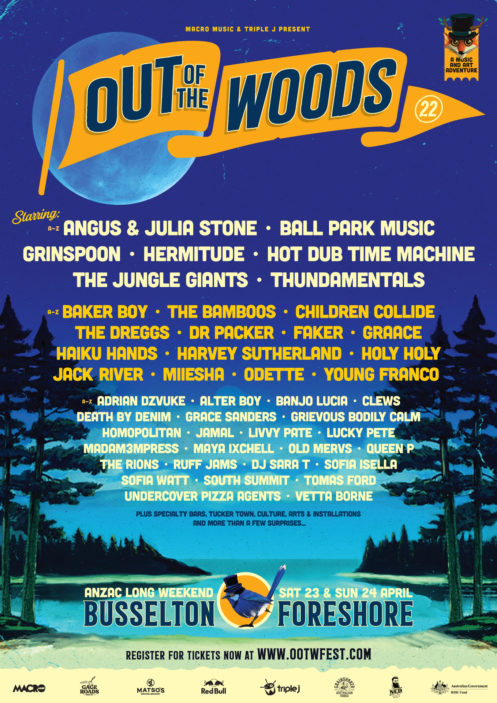