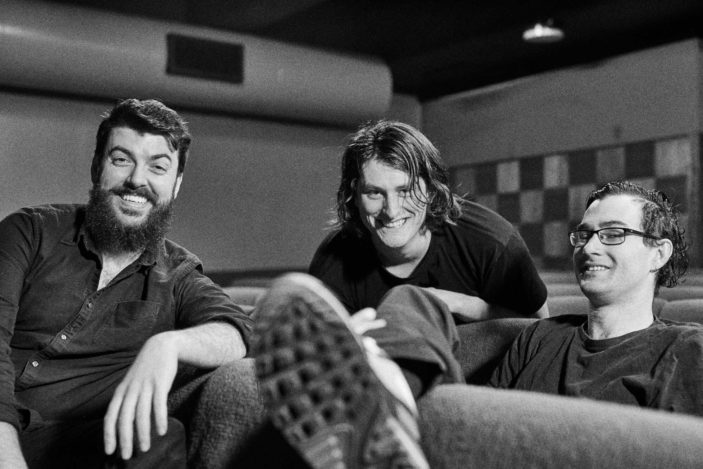 Hobart rock trio Verticoli have proven to be one of the most promising acts from the south with their resolute new album The Echo, released 9 Nov. The 10-track project was in safe and confident hands, being produced by Jon Grace (Dear Seattle, Dune Rats, Kingswood) and mixed by Forrester Savell (Make Them Suffer, Karnivool, The Butterfly Effect). Featuring the singles “Hits of the Summer”, “True Love”, “Sailor” and “Pride & Legacy”, the record is an impressive effort from the band after their three previous EPs since emerging in 2013.

Vocalist and guitarist Sam Hunn takes us through The Echo track by track to shed some light on the creation of and meaning behind each song.

“Undercover” is about feeling twisted up on the inside, paranoid, generally not right, and trying to hide that from everyone, and keep pushing on when your perception of everything is warped, and you don’t feel you can trust yourself. The main riff is a Tom Morello F# special, which is, in my opinion, the heaviest place to write a riff on a guitar in standard tuning. The song sounds like RATM, Stone Temple Pilots and Nirvana having a dinner party. I was really into the idea of doing an ‘anti-guitar solo’ but on a shred guitar, which I think was a Jackson (borrowed, my Ibanez didn’t make the trip across the Bass Strait to the studio). I like the juxtaposition.

“Pride & Legacy” is the Pixies’ loud-soft formula with a bit of a heavier edge (cheers for the inspiration Kurt). The lyrics are inspired by Roman leaders sending away troops to conquer foreign lands and peoples in the name of prestige. Kind of like a “Disposable Heroes” except… well, it’s pretty much just “Disposable Heroes”, however unintentionally.

A summer banger! This song was developed from a demo that was sitting unloved on my phone for years, and I listened to it and said, ‘What the hell is that!’ and thought it was really cool. Then I had to figure out how to play it. I wrote lyrics about being punched when I was 19 over a love triangle. Great times. It’s always fun hearing something you can’t remember coming up with and thinking, ‘That’s sick!’. It gives you confidence, and maybe you don’t totally suck arse. Great drums, great bass. Good one, boys.

Musically “Silent Scream” is probably one of the more interesting songs on the album, kinda inspired by Refused and maybe Turnstile. Lyrically it grew from something I said to a mate once: ‘I wish we could all just live in a monastery together’ (Hi Anees, if you’re listening) when life was getting too complicated. And then it got a bit darker when I fleshed out the verses… the monastery turned into a place to escape from those dark thoughts and feelings and ‘sing out the silent scream’.

A salad, if you will! The only acoustic number on the album. But somewhat rocky too. Lyrically inspired by growing up and figuring out everyone’s not so perfect, everyone’s battling, and it’s really reassuring and even motivating to know that. It’s a reminder to tell my kids one day that I’ve made a lot of mistakes and that (hopefully) everything will be alright for them as it will (hopefully, a work in progress) be for me.

There is literally nothing to this song lyrically. It’s about a love of music and the passion and meaning to life it brings. It was one of my ‘song-in-a-day’ challenges where I hid myself away and forced myself to be productive and crank out a tune. I was reading Dave Grohl’s autobiography at the time, and his internal kernel of motivation to keep writing music for God knows what reason resonated with me and shaped what the song is about. Musically it’s pretty dissonant, and a mate said he thought it was rhythmically one of the most interesting tracks on the album, which was cool to hear. We love grooves and rhythms as much as we love riffs.

This is a punk song from years back! It’s been kicking around for a while. I was feeling pretty love-sick and consequently wasn’t really doing much that I enjoyed doing, just thinking about this girl. One of the original lyrics was, ‘I don’t even play my guitar no more, I’m just a shadow of a dog’. The first part got scrapped, but that really sums up what the song is about. The chorus is this primal scream of frustration about something that occupies your every waking moment, but you’re desperate to shake! I think most people can probably relate to the idea that love is great and we love to love, but it also can be the most annoying and debilitating thing when it strikes at the wrong time, is not reciprocated, or throws you off kilter.

As wanky as this sounds, this song was lyrically inspired by a book I read about Einstein. I remember having these images come to mind reading about his thought experiment about relativity and a train, someone in the train, someone outside the train, the train going by… I’m not going to pretend I know anything about general relativity, and that’s not what the word relativity means in the lyrics. Still, the images generated by the author’s words stuck with me, and I just tried to lyrically depict how they made me feel about the passage of time and our short time on earth.

Musically the song arose from the first jam (drummer) Colvin and I had when we started playing music again together after some time apart. We started jamming this thing that sounded like the outro to the Pearl Jam song “Present Tense”, or at least had that vibe. And then I started toying with the idea of essentially keeping the guitar fairly similar, but moving the bass around under it to make some cool chord changes, something that is the root and 5th becoming the root of a new chord, the 5th and the 9th for example. It was a lot of fun developing this song into what it is.

Not much to say about this song! Is it filler? You decide! We think it kind of bangs. It’s got that Evil Empire ‘three dudes in a room just banging it out’ vibe, without much else but a hard and fast performance. The song had two lyrical versions, one about my grandfather getting pissed off at me for swearing and the other about being a COG IN THE CAPITALIST SYSTEM. Unfortunately, the decision was made to go with the latter. At least it’s not communism.

Not gonna say much about this song except that it’s the best song in the album. It was written in the last couple of days before we hit the studio. The song is about feeling like your rock ‘n’ role models, who all died young, kinda didn’t set you up for all that much beyond the age of 27. It’s got a droning guitar part that mixes in with some big heavy chords and a standing-atop-a-mountain-being-circled-by-a-helicopter kind of guitar solo. If you only listen to one song, listen to this one.

Verticoli will be taking the new album across the country on an eight-date tour this November and December. You can stream the album HERE. Follow the band on Facebook and Instagram for more.