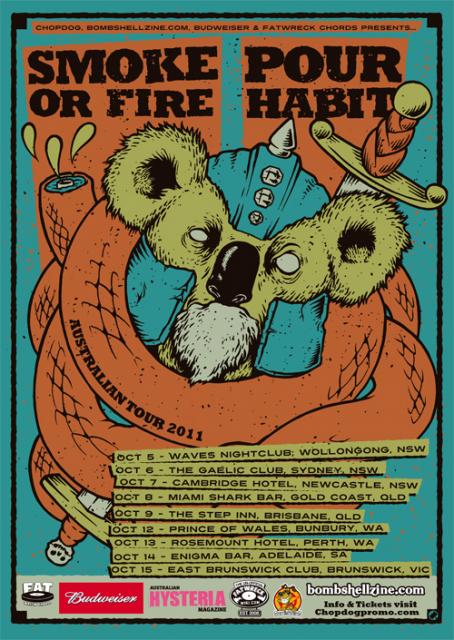 Once every now and then a tour comes along that makes you give yourself a little pinch; just to see whether your dreaming or not, well, sit back, take a breath and get ready because this October CHOPDOG, BOMBSHELLZINE & BUDWEISER are proud to present two of FAT WRECK CHORDS heavyweight punk bands POUR HABIT & SMOKE OR FIRE. The co-headlining tour will consist of 9 shows spanning across WA, SA, VIC, NSW and QLD.

It would be really easy for a lazy journalist or casual punk rock fan to unfairly pigeonhole POUR HABIT without ever having heard them. After all, they’re a fast, riff heavy metallic/melodic punk band from Southern California, their name is a drinking pun and they’re on Fat Wreck Chords. However! That kind of reductive logic ignores that this is one of the most out there, genre bending artists to unapologetically mix up musical styles while weaving politics and partying together into a one of a kind manifesto that hearkens back to the early day’s experimentation in insurgent music. POUR HABIT’S about to have a whole lot of people talking about the way they do shit, which is frankly, pretty unusual.

SMOKE OR FIRE is back after a tour of the world, a line up change and months spent working on their latest full-length, The Speakeasy. The band has always kept their fans alert over the years, but things are more concrete than ever and their sound remains true. SMOKE OR FIRE has returned with a new sense of confidence, urgency, and direction. Though it’s been a while since we’ve heard new music from SMOKE OR FIRE, it’s been worth the wait. The Speakeasy shows us that in the life of a band the journey can be just as important as the destination.

Tickets on sale June 14th at 9am

Tickets from the venue, www.moshtix.com.au, 1300 Get Tix & the Rock Shop Hunter St

Tickets from www.eastbrunswickclub.com, and at the Corner Hotel Box Office Ph – 94279198