When Kingswood returned from Canadian Music Week in Toronto, they shared with us their experiences on the road. From an intense game of oversized Jenga, giant pizza, and maple bacon donuts, to Niagara Falls and the upside down house, the band share their adventures and funny stories for us to enjoy.

If you have ever been to Bigsound in Brisbane, The Great Escape in the UK, or SXSW or CMJ in the US, then you know what these music conference/festivals are like. For those who don’t I will quickly explain. Hundreds of bands and artists converge in one city, usually a small area within the city, and play shows all day and night in tiny bars. Some venues will host 10 or more bands on one stage each day, and as you move from bar to bar you are sure to find a gem. 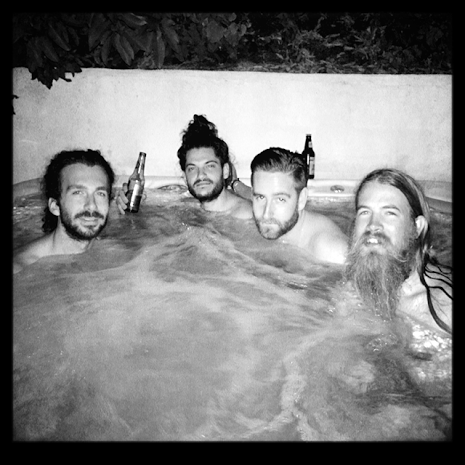 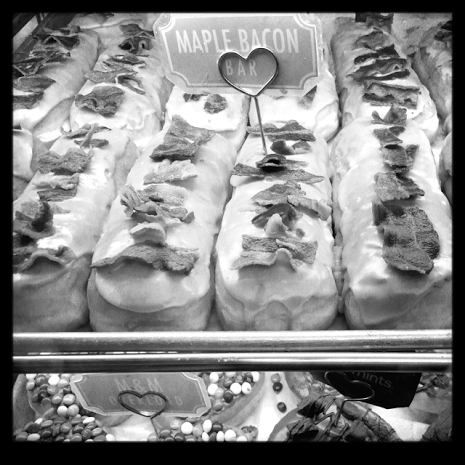 Toronto is full of tiny little bars and has a real alpine town feel, fireplaces, games. Two weeks before we arrived the city was covered in 4 foot of snow, so they know how to enjoy time indoors. This game of oversize Jenga was a great battle and even drew a crowd. Alex however ruined the game by taking about 10 minutes to slowly nudge a block out. The crowd got bored, as did we, Al was quite pleased with himself. You had to admire his persistence. 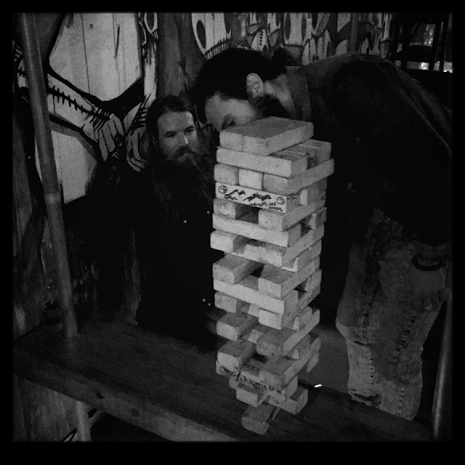 THE GREAT WEEKEND ZOMBIE SURVIVAL COURSE FOR ADULTS!!!!!
I am most looking forward to the ‘Wild Edibles Workshop’.
We may laugh now, but who will be laughing when the zombies actually come. 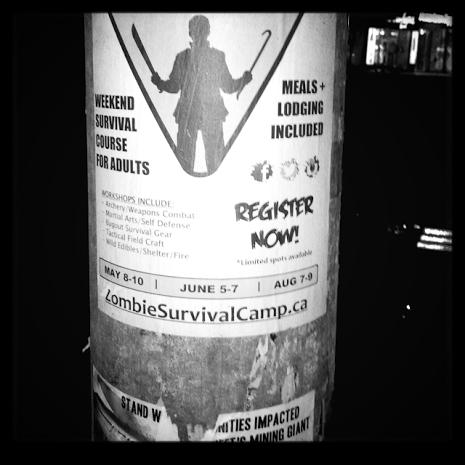 Here J, Al, and myself are just having the most wonderful time at Niagara Falls. Mango also had a wonderful time, but he’s just not in the picture. Don’t assume that Mango isn’t a fan of waterfalls, he bloody loves them, he thrives in them. In fact at the time of this picture he was probably bathing in the white wash catching overly ambitious Salmon in his beardy mouth. And yes that is a KW hat. 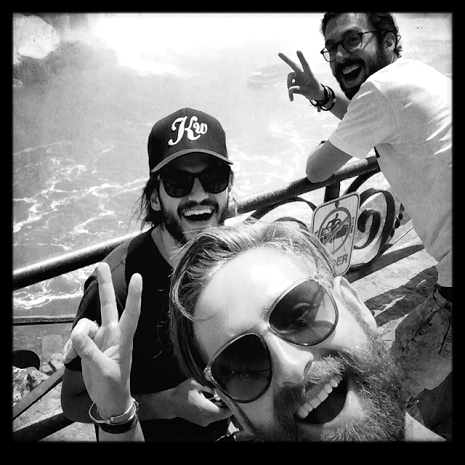 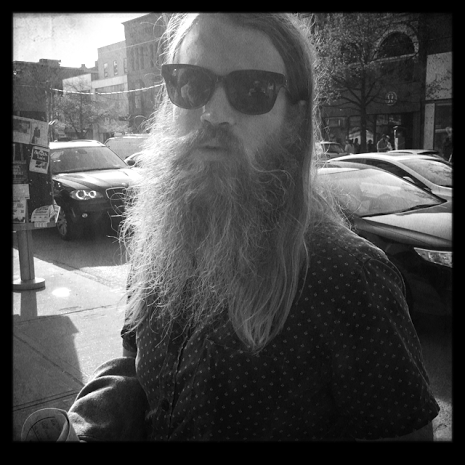 We were about to leave Niagara Falls to head back to Toronto but Alex just had to visit the upside down house. No one I know can transform between adult and child more than dear Alex. 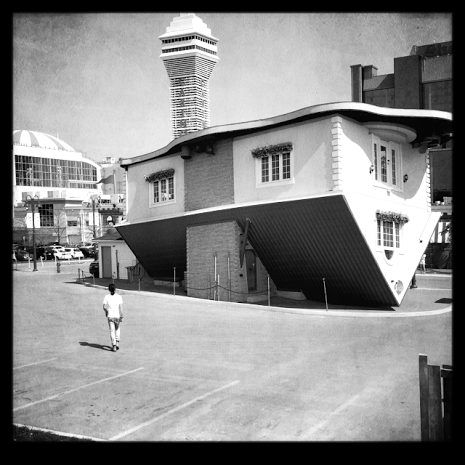 This is a terribly blurry photo of ‘The Ghost of a Saber Tooth Tiger’, Sean Lennon’s band. Sean sounds remarkably like his dad, well I guess its not that remarkable, but it was strangely wonderful. Forgetting all the ‘Lennonness’ (word I made up), they are a great band worth checking out. Other musical highlights were ‘Fat White Family’ a band from the UK, and ‘Attica Riots’ from Winnipeg, Canada. And of course dear friends the always excellent Love Junkies from Perth. 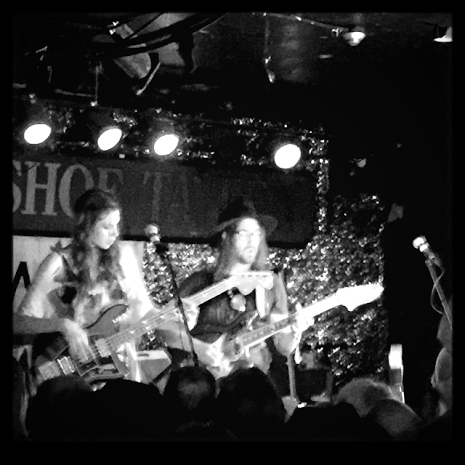 We spent over three months in the US in 2013 and became big fans of baseball. This was our third game this trip, two Dodgers games in LA, and now the Boston Red Sox taking on the Toronto Blue Jays at home. We love the Red Sox as they won the World Series 2 years before, but my brother always barracked for the Blue Jays so I was a little torn. I decided to cheer the Blue Jays and we won 7-0. 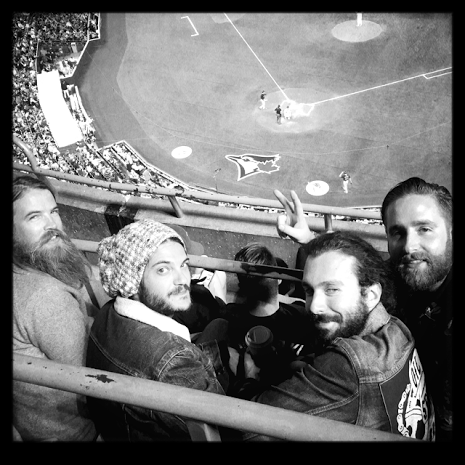 This is my favorite person in the world. George Trullinger the impersonator. Here he is dressed as Mick Jagger (in a Stones T-Shirt), and he has even signed the picture as “Mick, the Rolling Stones”, as I’m sure Mick himself does. I’d like to imagine George pumps stones records during the photo shoot and talks in an English accent. Hey…. whatever works. 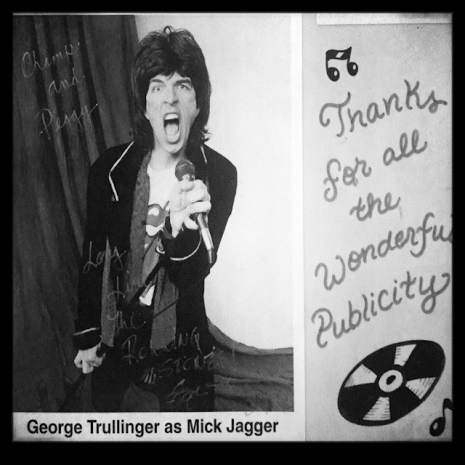 If anyone remembers ‘Test Match’ the cricket board game, then you will appreciate this. SUPER STADIUM, The Baseball equivalent. This provided hours of fun. It has a moveable magnet so you can throw a curve ball, and a trapdoor to throw a breaking ball. WOW. 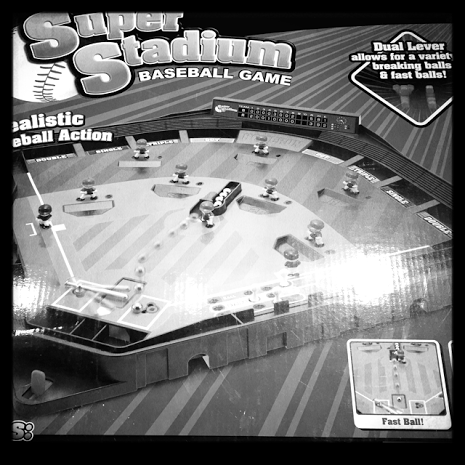 This is just a pic of Al and his giant Pizza. Thank you, I’m sure you have learnt a great deal. 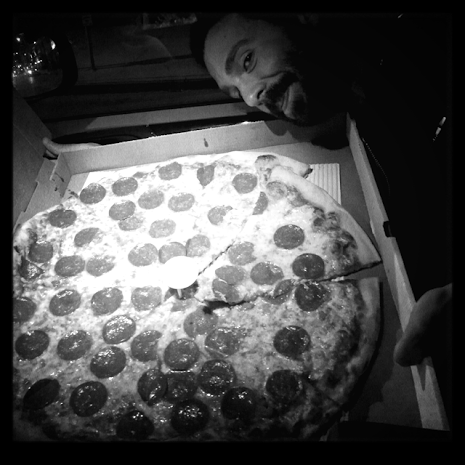