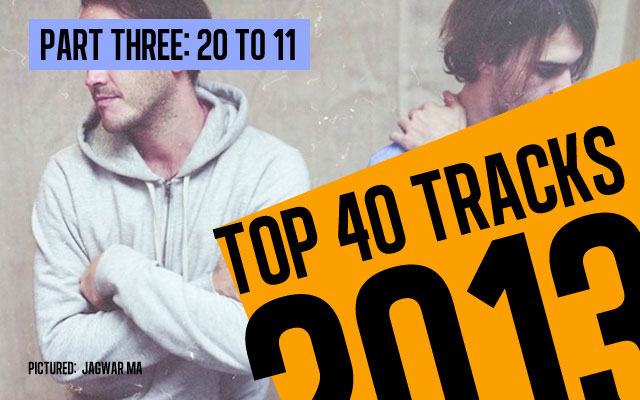 It’s time to enter the top twenty of our favourite tracks of 2013, as voted exclusively by the writers and photographers at the AU review. So strap yourself in, there is some damn fine music enclosed…

Jayden Wilson: Laura Marling is an artist that grows and changes with every record she releases. Master Hunter is an example of pure artistic talent and ability, which showcases a band made up of mostly Marling herself playing all instruments. Lyrical genius – including a nod to Dylan’s “It Ain’t Me Babe” – and a stripped back rocking gem.

15. Arctic Monkeys – Why’d You Only Call Me When You’re High?

Sosefina Fuamoli: “Now it’s three in the morning/and I’m trying to change your mind/Left you multiple missed calls/and to my message you reply…” …Come on, we’ve all been there. Catchy beat and simple lyrics that ring familiar for many no doubt, “Why’d You Only Call Me When You’re High?” was a song that made many ears prick up and go, “Arctic Monkeys? Say wha?”.

Mairead Bilton-Gough: An uplifting track that is bound to have you dancing. The perfect breakthrough single.

Chris Singh: When Nina Simone tackled politics with ‘Strange Fruit,’ I doubt she would have expected a producer named Hudson Mohawke (as part of TNGHT) and a loud-mouthed rapper named Kanye West to completely pick it apart and pound it with stadium-worthy synth-hop. Southern rappers ran scared and hid from this monster beat; Mike Will Made It probably cried when he heard it; Three Six Mafia most likely started writing their goodbye notes; and somewhere behind bars, C-Murder wouldn’t have been able to stop smiling.

Kanye West reflects on a soured relationship while redeeming his use of autotune (let’s just pretend the lingering singing at the end didn’t happen), but the two primary reasons this song work so well is the hype use of the classic C-Murder sample, and Mohawke’s undeniable production. Place any song this year side-by-side with ‘Blood on the Leaves’ and the team of Kanye and TNGHT will agressively smash it to pieces.

Pete Dovgan: Cool garage rock! Bloods are going to be massive in 2014.

Sosefina Fuamoli: I could bang on about this song all day, but it’s been done by so many others, there’s nothing more to add. Great vocal punch and when done live, it’s impossible not to throw your body back and forth. Hell fuck yeah.