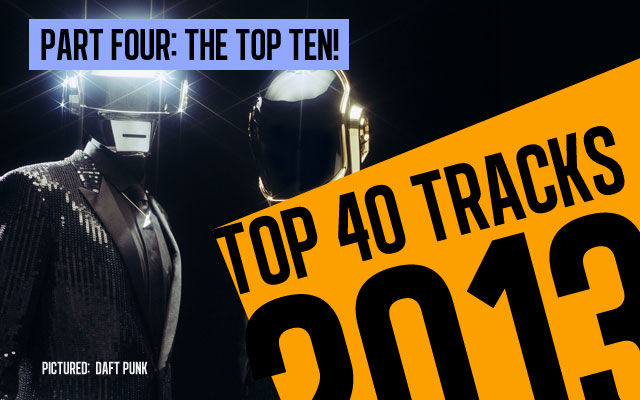 The time has come for us to reveal out top ten songs of the year… here we go!

Jules LeFevre: His home grown studio rat magic is perfected on this track – lush synths, skip hop beats and Blake’s own tumbling croon are the reasons that this track is his best yet.

Larry Heath: Oh that banjo! One of the best written songs of the year seemed to come out of nowhere from this up-and-coming talent. If this is what he’s producing on a debut EP, we can only imagine what will come next…

Chloe Webb: This track introduced me to the cheeky, story-telling chops of Courtney Barnett. The way this tracks depicts the tale of a bit of a chump frolicking in the garden, experiencing an anaphylactic attack and reflecting upon their own uselessness proves simply addictive.

Larry Heath: Two words: David Bowie. The album’s title track exploded into your eardrums, and though the album failed (in my opinion) to reach consistent heights, “Reflektor” sticks with you in ways few songs do. It’s Arcade Fire – and music – at their finest.

4. The Drones – Why Write A Letter That You’ll Never Send

Andrew McDonald: Everything perfect about The Drones in one beautiful song. Noisy, boisterous and musically playful- but all undercut by an aching and sorrowful lyrical ode to simply wanting more or asking why.

3. The Preatures – Is This How You Feel?

Tanya Ali: Downright awesome track from Sydney legends. “ITHYF?” encapsulates 2013 for me, with its infectious guitar licks and powerful vocals from frontwoman Isabella Manfredi. Can’t wait to hear a full length release from these guys next year.

June Murtagh: Simple but effective, this track is the kind that you’ll no doubt find yourself singing along to – and not just the vocals either, but the killer drums, catchy guitar and moody bass.

Philippe Perez: It’s too simple to be a catchy song, but it is! Its sparseness makes it unusual, but Lorde’s voice makes the song extraordinary.

Justine McNamara: Have you listened to the harmonies in this song? They’re fantastic. The lyrics are that of a much older person, not a 16 year old. Lorde shows wisdom beyond her years with this song.

Chris Singh: It’s a fairly outside-looking-in critique of surface rap culture, but Lorde’s sardonic anti-pop pop anthem succeeds on the back of excellent production and her undeniable wit. She may be the idol for up-nosed, pseduo-intellectuals under the age of 25, but Lorde and her defining hit show no signs of leaving the spotlight. ‘Royals’ was the beginning of something big.

Antigone Anagnostellis: The wittiest lyrics from the youngest songwriter…

Bridget Hustwaite: We all might be a little sick of hearing her name, but you cant help but love Lorde and its all thanks to “Royals”. With a simplistic production and relatable, intelligent lyrics, Lorde has really struck a cord with both independent and mainstream audiences, proving that “less is more” does in fact work and we should never, ever underestimate the power of a 17 year old.