Over the next four nights, Chicago’s iconic Lollapalooza will be transformed into a spectacular online festival with retrospective performances alongside intimate discussions and more than a handful of new, original performances by big-ticket acts.

It’ll all be going down exclusively on YouTube, following the path of previous festival-streaming events but offering a deeper exploration to one of the most legendary music festivals around.

READ: The Best of The Best at Lollapalooza 2018

Taking place across the original dates of Lollapalooza, the broadcast will kick off at 5pm CT (8am AEST) each day, kicking off with an address from Chicago Mayor Lori E. Lightfoot and festival founder Perry Farrell, following by retrospective sets from the likes of Alabama Shakes, Run the Jewels, Cypress Hill, Paul McCartney, BROCKHAMPTON, LCD Soundsystem, Tove Lo and more. 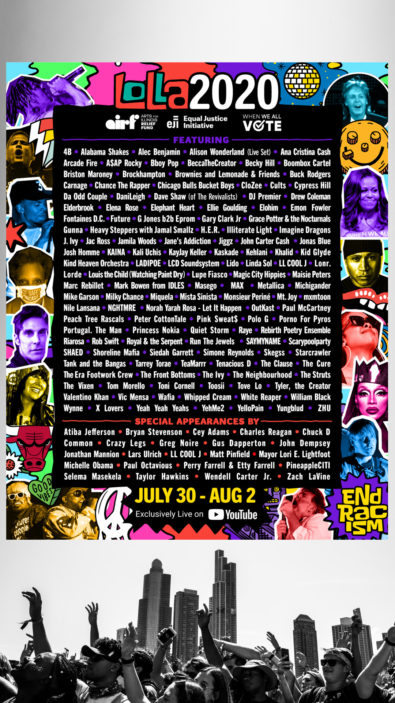 Original sets will come from DaniLeigh, H.E.R, Tom Morello, Australian heroes Skeggs, Toni Cornell and others, mashing up alongside the other broadcasts for what will be a constant time warp of Lollapalooza’s past and present.

READ: The Best on Ground at the 25th Anniversary of Lollapalooza

To top that off, there will be other special segments breaking up the live music, such as special sessions with LL Cool J who will each day be detailing a different element of hip hop.

Lolla2020 will also be focusing on the city which birthed the festival, highlighting causes important to Lolla’s history, community and home of Chicago.

READ: The Best on Ground at Lollapalooza 2017

Those paying close attention to the streams may also spot their chance at winning a range of prizes, the pinnacle of which is two four-day Platinum Tickets to next year’s event with flights, a hotel suite and a new 2021 Corolla Apex. Details on that can be found here.

To access the stream head on over to youtube.com/lollapalooza.