The best of the best at Lollapalooza 2018: The moments we will never forget

2018’s edition of Lollapalooza was very different from the ones that have come before. It was very much a music festival for the days we are in now. The lineup propped itself as a perfect capsule of what music is today with the biggest names in pop music, EDM and the best rock bands of this generation. This was a festival for the now and not for what has been.

It would be easy to criticise this, but after the four days of seeing where music is at now and where it is going, it’s actually a pretty cool thing that Lollapalooza offered up its giant park, the 100,000 plus fans in attendance and it’s notoriety to something so current and artists who all earned the right to be there.

The four days were jammed pack with huge draws, emerging breakouts, and something for truly everyone. The greatest thing about Lollapalooza are the choices and opportunities to make it whatever you want. With two giant stages, one can see the biggest bands and singers in the world, but just a short walk away, the festival goers can experience intimate shows and small crowds at the stages tucked away. Or you can just find a tree, lay down and eat the best deep dish pizza in the world.

With so many choices spanning every genre it is impossible to catch everything, but we at The AU Review tried. Here are some of the best highlights of the festival. 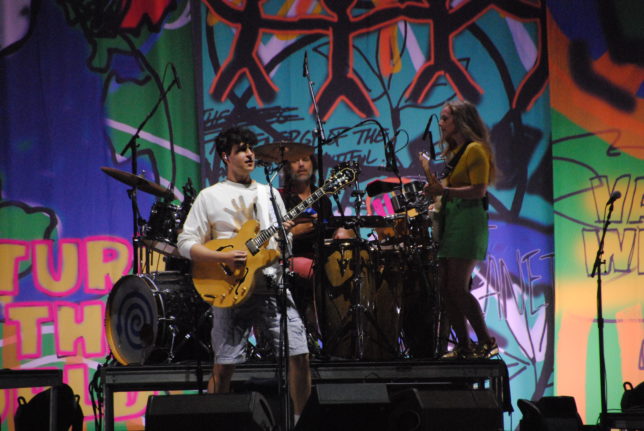 Usually a celebrated a reunion is a band coming together after a break or inner turmoil. But the best reunion of this year’s Lollapalooza was reuniting Vampire Weekend with its fans. Playing their first US festival in over four years there was a massive amount of excitement in the air. As the band took the stage, the thousands in attendance screamed and were finally watching one of the best Indie rock bands of the 2000s.

And how we they greeted? By the same song, three times in a row. The opening guitar riff of A-Punk greeted the Chicago skyline and every one in the audience immediately started shaking their hips and waited for the chance to scream, “Ay! Ay! Ay! Ay” but little did they know, they would be doing it three times in a row, While a lot of people looked around confused, I found it hillarious. In a way they were kind of trolling everyone in attendance, by asking “you sure you really wanted us back.” Luckily for all, A-Punk is only 2 minutes and 18 seconds and it’s a damn fun song to dance and sing to.

The rest of their show was filled with their many hits from all three of their albums. “Cousins” made everyone move, “Oxford Comma” reminded us of Ezra Koenig’s incredibly intelligent, witty lyrics, and “Hannah Hunt” showed off his iconic voice.

But the best part was when Ezra announced the new album was finished. “Those five years sure did fly by though, right?” he exclaimed to a thrilled audience.

It is a great thing to have them back 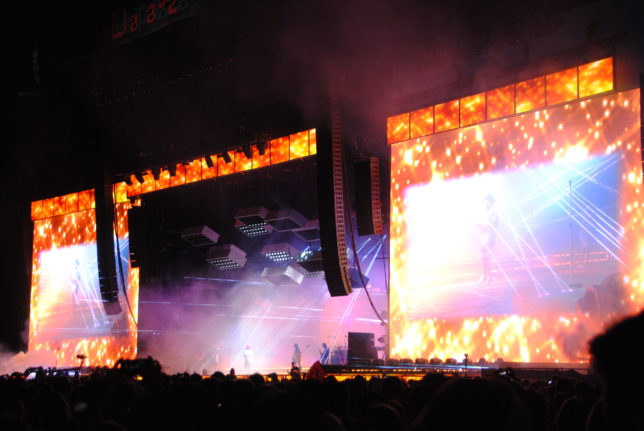 Bruno Mars is not a name you usually see on a festival lineup. The pop/crooner megastar had a crowd that covered half of Grant Park and an audience that ranged in age from toddlers to seniors and each generation was just as excited as the other.

His show wasn’t short on spectacle and mega hits. Cast in a Chicago Bulls Scottie Pippen jersey, Mars knew how to make the Chicago crowd happy and his 90-minute set was him flexing every pop music muscle in his body..

This was a great year for Australia at Lolla. Six artists all born in Australia played across the many stages of Grant Park and each shined just as bright as the other. 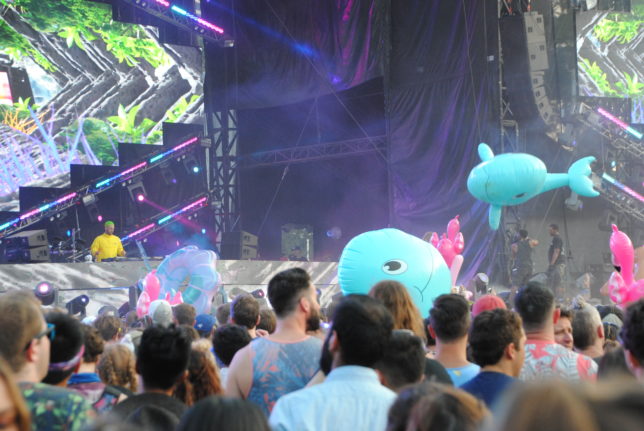 What So Not had a massive Sunday crowd and was greeted by nearly 100 inflatable whales, popsicles, flamingos and more. With his joining guitarist, What So Not’s smile shined just as bright as his green hair. It was a great crowd, a great show and a great moment for him. 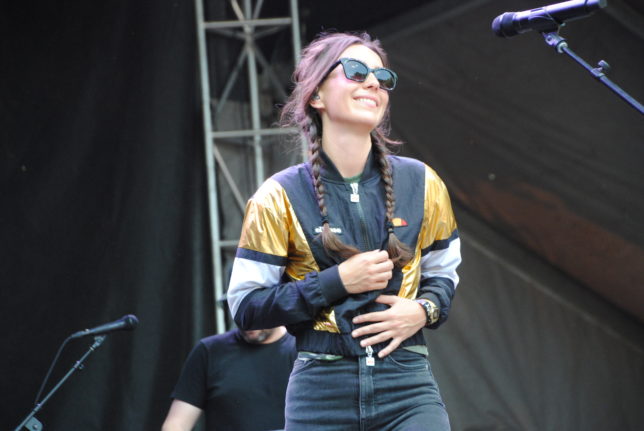 Amy Shark exclaimed “Welcome to the greatest day of my life!” when she took the stage and she greeted the crowd with amazing charm and outstanding vocals to match. Vera Blue soothed, and Alex Lahey had an amazing set and was able to open up for The National at their intimate after show. 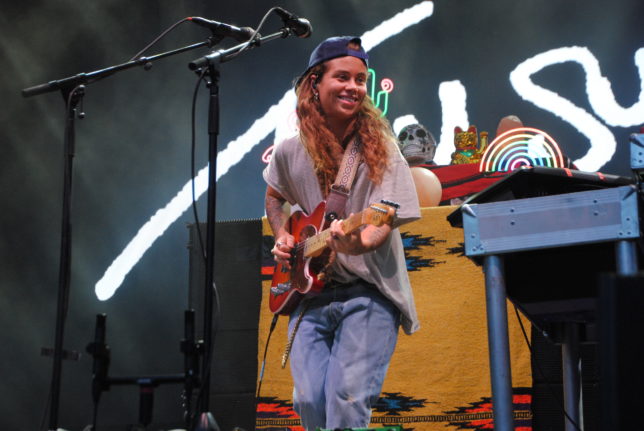 But the award for Best Aussie show also goes my favorite discovery of the weekend, Tash Sultana. What a freakin rockstar! Sultana had no shoes, but more rock in her pinkie toe than 90% of the Lolla lineup. Her incredible skills looping in all of her many instruments made her show as entertaining if not more than any of the biggest headliners of the weekend. Her talent musically alone is mind blowing, but then she starts singing and it doesn’t make sense how she also have such a soulful, incredible voice.

Through her entire, the smile never left her face and my smile never left mine. This was the greatest surprise of the festival for me, and I plan on seeing Sultana perform another 100 times if I can. 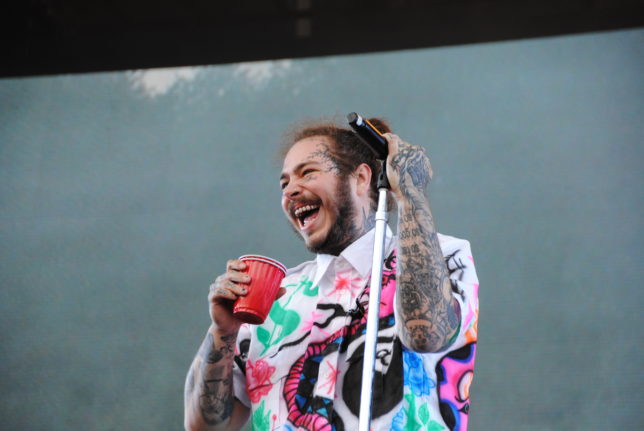 The artist I was most excited to see was hands down Post Malone. With YouTube videos at nearly one billion views, Post Malone is a pop culture sensation. It was easy for me to write off his music, but to prepare for the fest I gave a few of his songs a listen and much to my surprise I started to enjoy what I was hearing. Could he possibly be good? I didn’t know.

So on Friday evening I made it a point to catch his show. What I discovered was something I never could have expected. The 23 year old hip-hop/pop/singer/songwriter was an absolute joy to watch. The level of humility, vulnerability and joy resonating from the stage was as bright as anyone of the whole festival.

He ran through his many hits thrilling the tens of thousands of young kids in the crowd but at the same time demanding the respect of the many who wanted to see what the big deal was. This was a fun show, a show I never expected to catch, but one I am so happy I did. I wish for nothing but the best for this guy in the future.

Best Ascension to the Main Stage 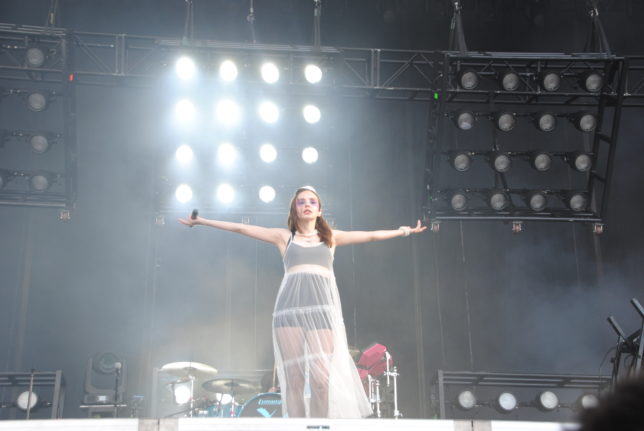 CHVRCHES first played Lollapalooza four years ago on a smaller stage. At that point lead singer Lauren Mayberry was emerging as an amazing singer for a band with some really cool beats and a decent show. Now four years later, they are full on rock stars. Having evolved musically and even more stage presence wise, this band absolutely owned it’s main stage billing. Their new music exploded on stage and showed the growth of this band is far far from over. 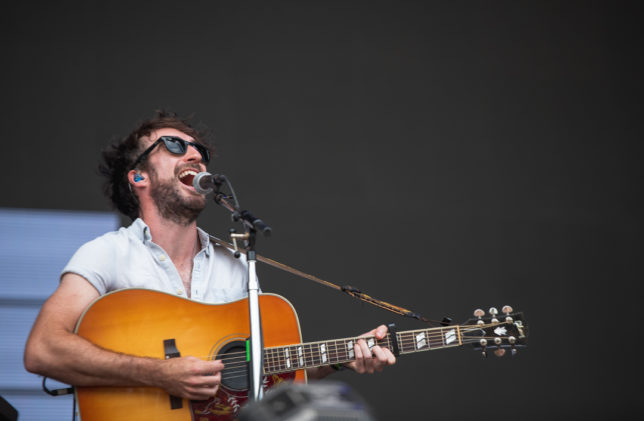 Count me in as a huge fan of The Coronas, the band with the number one album in Ireland could be seen all over the festival rocking out to St. Vincent and singing along with Vampire Weekend. But it was their Sunday show and overall likability that gained them in a new fan in me. Being able to sit down and talk to them about their Lolla show, their love of the other acts at the festival and their excitement about their Aussie dates was one of my best memories of the festival and I can’t wait to catch them again.

Perfect Set for the Perfect Mood 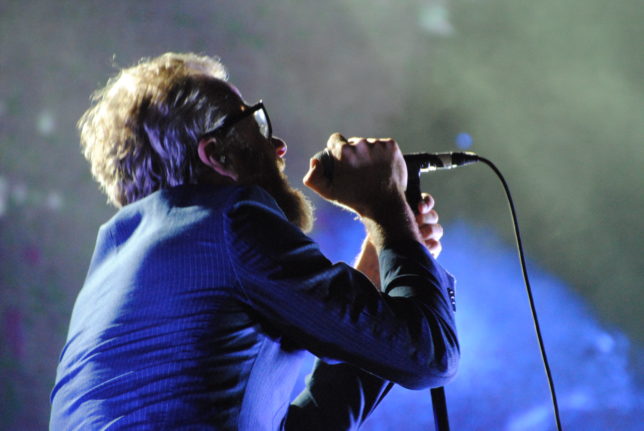 The biggest crowd of the festival might have drawn many numbers away from the competing headlining stage played by The National, but it didn’t effect them or their show one bit. Honestly the smaller crowd, made it feel more intimate, more honest and quite honestly better.

The National’s shows are always going to include lots of emoting, lots of moody blue lighting, but plenty of moments to rock. They hit every right note on the show and the crowd loved it. Their show flowed perfectly and really showed why The National has grown to the level they are at now.

It was a great response to the previous night’s rock headliner Arctic Monkeys, who played a very uneven, uninspired set. Arctic Monkeys have become a very different band since the release of their latest album Tranquility Base Hotel + Casino, and the inclusion of those songs mixed with their incredible cuts from A/M and even earlier tracks resulted in a show that never truly gained momentum. Maybe they are experiencing an identity crisis or just trying something different, but it didn’t work for me.

The Queen of Lollapalooza 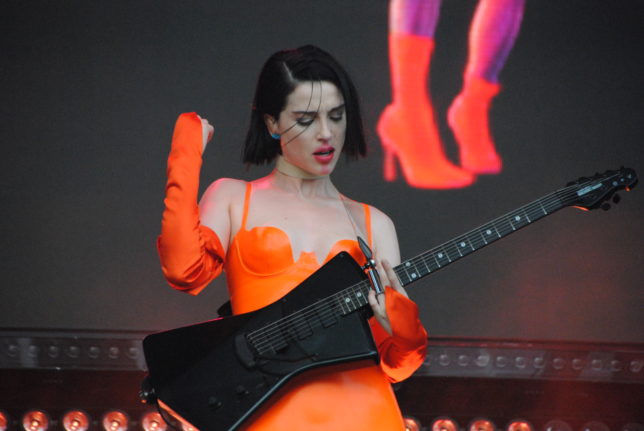 You really can’t put into words the presence of St. Vincent on stage. Everything she does rings out so large, so strong, so cool. From the moment she walked out on stage, it was as if she owned the entire festival. As she set up shop on her small black platform in the upper left portion of the stage she wouldn’t move for the entire set, but she didn’t need to. Every facial expression felt orchestrated and planned, as if it was half rock show, half performance art piece. It was fascinating to watch, and oh yeah, she’s a freaking genius on the guitar. On Saturday, Lollapalooza belonged to St. Vincent.

Sunday was a great reward to all the kids who were tired of pop music and just wanted to rock. Jack White, Portugal. The Man, and Manchester Orchestra played in a triple-header of pure rock. 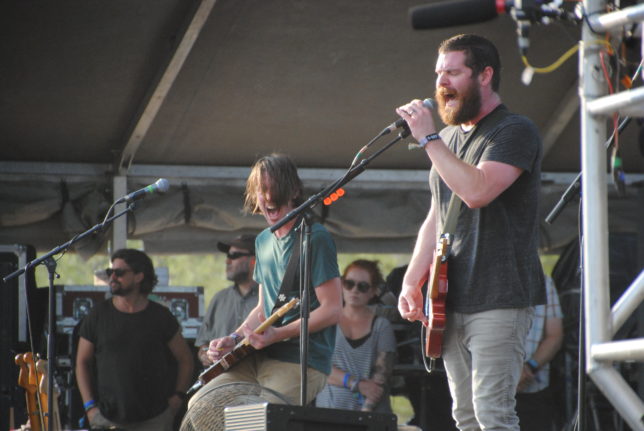 Manchester Orchestra and Portugal. The Man have been playing American music festivals for years but have earned their headlining status thanks to two of the best albums of the past year. “The Gold” is the best track Manchester Orchestra have ever recorded and it shows their evolution as a band. Their live show is what sets them apart and their incredible talent and ability to rock hard is the greatest compliment to lead singer Andy Hull’s incredible voice. 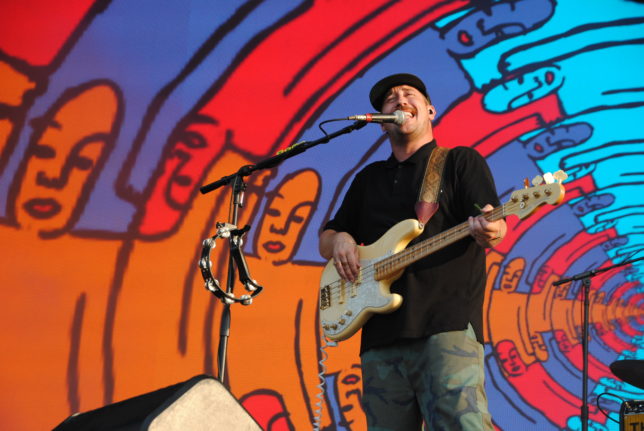 While “The Gold” was a great song, it hasn’t touched the level of success “Feel it Still” has had. That song has elevated Portugal. The Man to megastar status and gained them fans no one would have ever expected to see at a Portugal show. Fame hasn’t changed this band one bit, it has only enhanced it. While their shows still contain the psychodelic jam band moments they were known for, it has grown to major status as they have added a full backing choir and a string section. The band took the stage right before Sunday night’s biggest headliner Jack White, and honestly drew a bigger crowd. It might have been the biggest moment in their career and perhaps a moment that truly announces who they are. 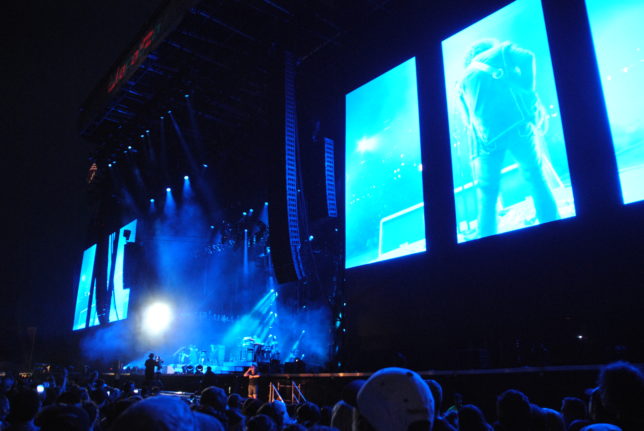 Sunday night and the festival closed with perhaps this generations biggest rock star, Jack White. White joked that he was surprised he was asked back to Lollapalooza, after the last time when he destroyed a few things backstage. White gave the fans all they could ask for as he dedicated a lot of his set list to his best solo work and a healthy dose of The Dead Weather, The Raconteurs, and of course The White Stripes.

White was the happiest and most talkative I have ever seen him. Life has treated him well and he has returned with great music every chance he has released something. The closing night slot was a well deserved reward for White. But the best prize was for the thousands in attendance who got to end Lollapalooza by screaming along the guitar line to “Seven Nation Army.” A pretty wonderful end to a pretty wonderful festival.