The NYE festival NYE In The Park have announced the festival’s return to Sydney’s Victoria Park on New Years Eve 2018. Following up on the success of last year’s party, this year the crew will bring an even bigger line up on stage to ring in the new year.

Headlined by Aussie electronic dance duo The Presets this party promises to keep you moving until the early morning. The self-described “pub rock techno” outfit has been active since 2003 and released three danceable singles this year. Check out their latest single “Downtown Shutdown” to get ready for the biggest and last party of 2018.

The event promises an escape from the CBD New Year’s Eve madness and a relaxed spacious venue to kick back and enjoy the party. The team issued this statement about the event:

New Year’s in Sydney has always been overcrowded, overpriced and ultimately, under whelming, and we want to change that. Our mission has always been to provide the Best. New Year’s. Ever. Last year’s event offered a hugely fun, highly affordable, drama-free night out – with ample space to dance, more bars and toilets than you can poke a stick at, a wide selection of great, gourmet street food, and an amazing line-up of music. This year we’ve managed to top that.

The event organiser promise more chill out areas than last year, affordable drinks, gourmet eats and a special firework display at midnight. The party will start at 5pm on the 31st of December, with plenty of time to sip your cocktail and watch the sunset over the backlit Sydney skyline before Midnight hits. The venue is easily accessible, only a ten-minute walk from Newtown station in Campertown’s Victoria Park. 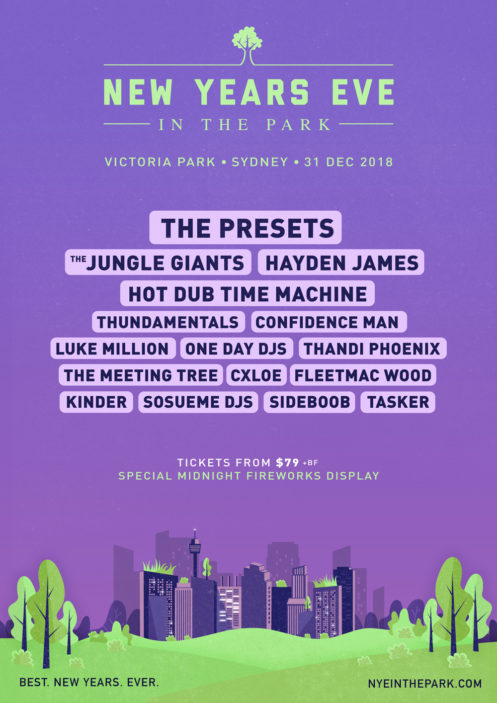 Tickets go on sale Tuesday the 9th of October at 10am. General admission is available at $79 and VIP tickets go for $169. For more details head to their official website.

Tags: NYE in the Park, The Presets