Interview: The Beths make way for Laneway before a massive year 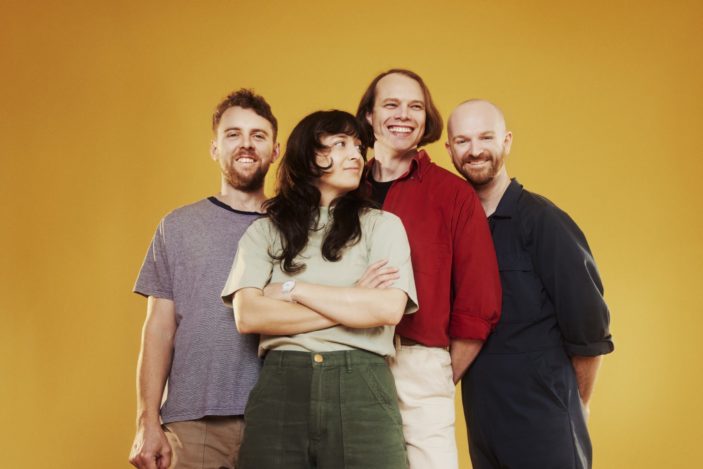 “Rest is weird.” – This is how Elizabeth Stokes, guitar, singer and one-quarter of the formidable team, band and fast friends that are Auckland’s The Beths, starts our interview.

2022 saw them perform around 94 gigs in over a dozen countries as they took the chance to promote not one, but two albums that have been released in the last three years.

The stop-start nature of the last few years has been both a hindrance and a saving grace for a band that are used to being busy, but appreciate that exhaustion is never far away.

“We were very close to full burnout, I think, by the end of that run in 2019”, Stokes admits, referring to the 120+ shows they played in that year. “That was intense and then we finished  making that album and then it was 2020, so it was kind of an enforced break period”. Stokes refers to the record, Jump Rope Gazers, released in July 2020 amidst the early uncertainty of the Covid pandemic.

Despite the more relaxed restrictions in New Zealand at the time and the ability to tour their own country, The Beths found it hard not being able to spread their wings to promote their 2020 album, so when their third album, the brilliant Expert In A Dying Field, dropped in 2022, the band were ready to go.

“Diving straight into this touring has been what we wanted,” Stokes continues regarding the past twelve months, “It’s been a stressful year, but it feels worth it, at the end of the year, cause we’ve released this record and directly comparing that to a record we released in 2020, this has been much more like what we wanted for putting out a record!”

For a band that feeds off the energy of their fans and the audience belting out their lyrics, this return to normal transmission has seen them launching themselves back into their craft in an even bigger way in 2023. With a huge run of over 40 shows already inked in until June, it all begins with the return of the Laneway Festival kicking off in their home-town of Auckland and then progressing around Australia.

“Yeah! Really looking forward to it!”, exclaims Stokes, “It’s always a highlight! In New Zealand, it sold out straight away!”, referring to the original location in Albert Park, which has since been upgraded to Western Springs, “They were maybe one of the few festivals who didn’t try to put something on over the course of the last couple of years and then have it delayed or postponed. They weren’t there and now they’re back and people are stoked!

The Beths are well established as headliners around the world, but Stokes still appreciates the opportunities that festivals can provide to convert new fans. “You’re trying to convince people, which I think can be a fun dynamic! Hopefully, by the end of the set, you can convert at least some percentage of them into fans – it’s going to be a fun challenge!”

Australians are well known to try and claim (see: steal) New Zealand originating things.  Russell Crowe, Crowded House and pavlova just to name a few. “You can have Russell Crowe,” laughs Stokes, as she continues to declare that unlike many before them, they’re not about to relocate or even declare Australia as their ‘second’ home. “I wish I could say that it was!” No scoop to be had this time!

The jangly guitar-based rock and rich story-telling of The Beths is something that Australians and New Zealanders alike share a love for and Stokes appreciates this symbiosis the neighbouring countries have, “There’s a love for guitar music that is just in the culture. A love for story-telling. Maybe it’s to do with pub music, I dunno, but I feel like it’s just really there. It’s a different kind of guitar music culture from the States or the UK. There’s more of a kinship there, between Australia and New Zealand.”

As far as the future goes, album number four is still in the clouds, but it’s certainly at the back of the mind of Stokes, “We love working the way that we work in New Zealand and working in our space. We’re looking at ways we can have fun with a fourth record, cause you’ve made three, you feel like you can kind of do things a little different, but still work in the ways that we like to work and still feel authentically us.

It’s safe to say The Beths are not slowing down again any time soon and the touring Laneway Festival is a brilliant way to not only start your live gig going for 2023, but to jump on board The Beths bandwagon, because it’s a rollicking hooky ride that you won’t ever want to leave.