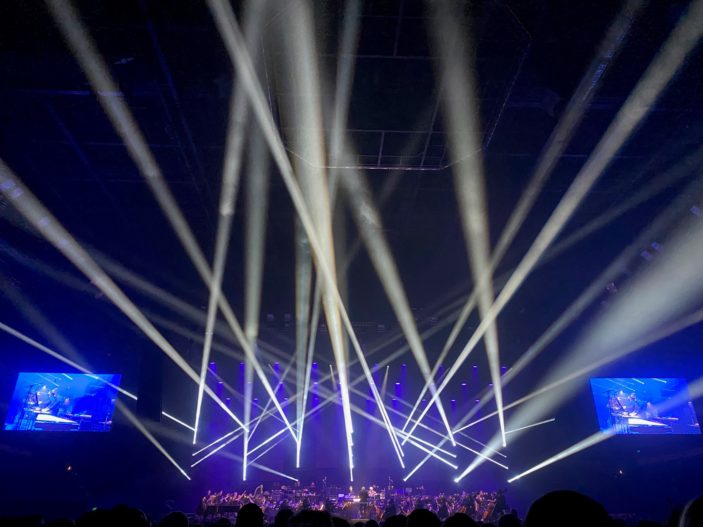 The Avalanches released their debut album Since I Left You in 2000 to critical acclaim. Created from countless music and film samples, it was a grand musical collage, creating orchestral sounds from layers of disparate noises.

Tonight at the Adelaide Entertainment Centre, the Avalanches duo of Robbie Chater and Tony Di Blasi were joined by the Adelaide Symphony Orchestra. Composer / conductor Nicolas Buc has taken the album and interpreted a score for the ensemble, combining strings, woodwind and brass and diverse samples of the album.

The ambitious project was first developed to celebrate the twentieth anniversary of the release of the album for the Illuminate Festival. COVID restrictions over the period forced the show to be postponed twice. However, the mood among the crowd was one of heightened expectation.

Adelaide’s own Electric Fields took to the stage as warm up act. The Australian Aboriginal electronic music duo made up of vocalist Zaachariaha Fielding and keyboard player and producer Michael Ross captivated the audience. Songs combined modern electric-soul music with Aboriginal culture. Fielding sings in Pitjantjatjara, Yankunytjatjara and English. A highlight was being taught to sing in native language.

After a short interval, the lights dimmed and the ASO began with “The Overture”. Chater and Di Blasi join the stage to rapturous applause and the familiar strains of “Since I Left You” filled the chamber. Large video screens, laser lights and haze created an intimacy in the otherwise cavernous room.

The score that Buc created for the ASO managed to expand the sound, creating a grandeur enhancing the original disparate samples. The music was often out of time or pitch in a deliberate reference to the soundscape. The orchestra were clearly having fun experimenting with pushing the barriers of conventional music theory. The irony is not lost that the original reason for so many samples being used was to create that feeling of largesse.

As a lesson in deconstruction, the wheel has gone full circle. Fragments of sound are combined which are then broken apart and reimagined on an orchestral scale. And unsurprisingly it works incredibly well. Strings and flutes recreate lightness. Brass and woodwind enhance the dance beats. There is a film noir feeling, enhanced with vintage film clips. The visual “silliness” is a nod to the often-self-effacing music. This culminated in “Frontier Psychiatrist” in all it’s craziness.

The balance between the keyboard and the orchestra was seamless, both complementing and enhancing each other. All too soon the album comes to an end with “Extra Kings.” The final sounds of the orchestra are allowed to drift slowly around the room. Becoming softer and more delicate, to finally feel as though we were in a yogic Savasana, resting after an intense emotional session.

The project is a credit to all involved, as it must have been a monumental task to bring together. This is a show that will be remembered for years to come.

The writer attended The Avalanches Since I Left You, Live at the Adelaide Entertainment Centre May 18,2022

The Avalanches are artists in residence for Illuminate Adelaide. More information about the Illuminate Festival program here.