In our 10th year of covering SXSW on the AU review, we’re thrilled to reveal the lineup for our first ever official showcase at the iconic Austin event. Partnering with our sister publication Hello Asia!, the event will feature three Australian acts and two acts from Japan and one from Korea. It’s all happening at Australia House (Lucille at 77 Rainey St) on Thursday 14th March from 8pm.

The event will mark the end of the AU’s 10th Birthday celebrations, which kicked off as part of SCOUTED in Adelaide last July, before hosting events as part of both WAM Festival in Perth and BIGSOUND in Brisbane. And just like these past events, the party at SXSW will showcase some of the hottest up-and-coming acts; one’s not to be missed.

Here’s a closer look at the lineup and set times: 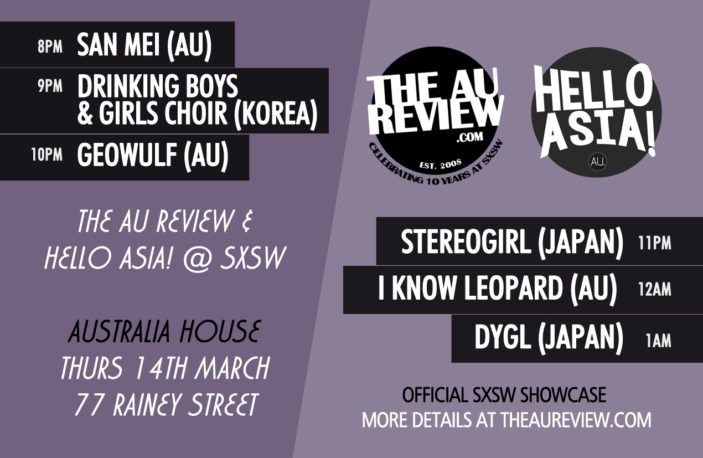 Stay tuned to the AU and Hello Asia! for full profiles on all artists playing the party.

As this is an official showcase, entry will be available to badge and wristband holders only, subject to capacity. For more details on a SXSW, head to SXSW.com.