the AU interview: Steve Kilbey of The Church (Sydney) 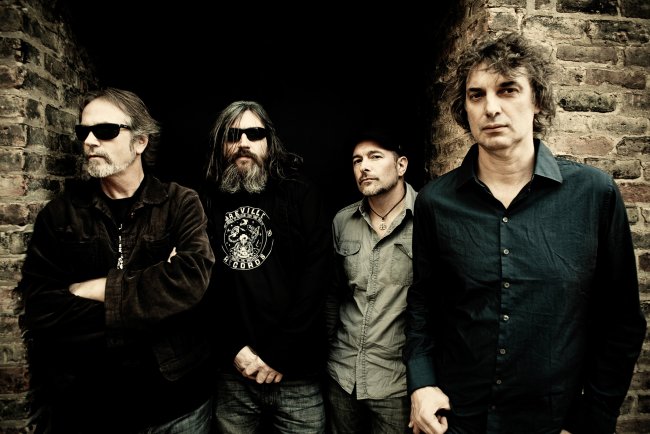 Tomorrow night, Steve Kilbey is joining Peter Koppes and Tim Powles from The Church for a one-off intimate performance at the Red Rattler in Sydney, to raise money and awareness for Autism Spectrum Australia. I had the honour of catching up with Steve last week to chat about the initiative, his work with Ricky Maymi from The Brian Jonestown Massacre and some of his collaborations from over the years – including the recent GB3 with Glenn Bennie.

You’re about to play some shows with Ricky Maymi on the back of the mysterious album The Wilderness Years, By David Neil – how did your relationship with Ricky come about?

I don’t know how you’d describe our relationship – it’s a bit father and sonish. He’s been a mate of mine for a long while now, we like a lot of the same music. He was in Sydney and I had this concept about this dead rock star who’d never really done anything, only released some very obscure records, and so Ricky and I said – let’s try and make the records that this guy might have made. It’s always good to have a premise when you set out to do something. It’s very difficult just to sit down and say, I’m going to write a song. It’s much easier to say I’m going to sit down and write a song that gives you this feeling, and these are the background details to it…

Well we’re excited to hear it! You’re touring throughout Australia and New Zealand in July and August. But you did do a few shows together last year?

Yeah. We’ve got a band, we’ve got a father and son bass player and drummer.

There you go! It’s almost like a double father and son act!

And this comes shortly after you performed shows as GB3, with Glenn Bennie, you’re definitely jumping between the projects at the moment!

How did that show go?

This GB3 record is an amazing record. It’s definitely up there with anything I’ve ever done. I’ve always wanted much more for it than it ever gets. Bigger venues and more people and more reviews. All the guys in the band have day jobs, and you can’t get Glenn to understand how amazing he is. If ever I compliment him on stage, and say ‘The Amazing Glenn Bennie’, he gets a bit angry. He’s lived a career of modesty. So I’ve always wanted more for that band and that record. It’s been a struggle to get it out there.

You released the record back in October if last year – what was the cycle like getting it to that point? From the time you and Glenn first had the idea to work together on the project, to the time it was released in stores…

Some cycles for my projects can be quite long. GB3 took a couple of years. David Neil is about three years, since it started. Others happen reasonably quickly.

There have been plenty of these sorts of collaborations over the years – from your Jack Frost project with Grant McLennan to Isidore with Jeffery Cain of Remy Zero.

And Martin Kennedy – he and I have started working on album number three. Always juggling a lot of projects.

But it always comes back to The Church, and today we’re talking about the Autism Awareness and Benefit gig you’re playing at the Red Rattler on the 23rd of June. How did this event come about?

The Church have an executive producer slash patron who is a wealthy professor from America. A fan of The Church who has helped us finance projects for 14 or 15 years. One of his daughters is autistic and it is his cause. It was his wish that The Church take up the cause as well. It’s really the only thing he’s ever asked of us in return. So we’ve been looking for an opportunity to raise awareness of this condition.

On a personal side, I have a nephew who has Asperger’s Syndrome, which is a mild form of Autism. Now our patron’s daughter has the sort of Autism where she is locked into her own universe, she’s inaccessible. Where as my nephew, in some ways he’s completely normal, and looking at him you wouldn’t know. He actually has a brilliant mind, he’s interested in arcane things like magic and the middle ages, chemical symbols and stuff. On the other hand, he can’t say hello and goodbye and thank you. He can get frustrated and upset quite easily.

When he first came into our extended family, everybody was quite confused. I thought he was just a naughty little devil… thought that my brother was letting him get away with too much! But once it became apparent what was going on, it changed everything – it’s a completely different thing. It became so much easier to approach him knowing that he had Aspergers. So I think that raising awareness is very important. This charity we’re involved with for this event, their specialty is in working to re-educate siblings of Asbergers and Autistic children, to be able to accommodate them in their lives.

My nephew has a sister that’s older than him and a brother who’s younger, they really had to learn to sacrifice a lot. If he comes into a room and he wants to sit on a chair that they’re sitting on, they’ll have to get up and let him sit there. They can’t do what a normal kid would and say ‘that’s not fair’, because his mind doesn’t work in those terms. And that’s where this program comes in to help the siblings understand that. I believe it’s a very worthy cause.
I’m not an expert in it, but I believe that the incidences of Asbergers and Autism are on the rise – but maybe that’s because we have a name for it now. Years ago you were just a naughty little bugger! Like my nephew, always wanting to sit in the same chair and things like that, but at the same time he’s got an absolutely brilliant mind. He’ll end up with a really important job, because he’ll be able to sit there and focus hour after hour on a task – far beyond what you or I could do. You look back at the geniuses of history, and hey’ve often said that people like Einstein and Newton had signs of Asbergers for that very reason.

It’s brilliant that you have this opportunity to bring light to the cause – what can people who attend expect from the performances?

There’s a Church side project called The Refo:mation, which is the band minus Marty. For the first time ever we’ll be playing songs off an album we released a while back. Ricky will be there playing guitar. Some other musicians will join us, some who have Asberger’s themselves and others who have been affected by it in their families.

Our MC is from a band called The Camels, and he has a brother who has been rated the most Autistic person in the Southern Hemisphere. That’s the private universe. Nothing’s coming in and nothing’s coming out. It’s like having a computer with all these files in it that you can never open.

INFORMATION ABOUT THE PERFORMANCE:

There will be no door charge on the night. Instead, punters are asked to be generous and dig as deep as they can by leaving a completely tax deductable donation on entry of around $60. (Tax deductible receipt can be issued)

UNIVERSE WITHIN: Autism Awareness and Benefit Gig with members of the church and special eclectic guests.