the AU interview at One Movement: Elliott Brood (CAN) 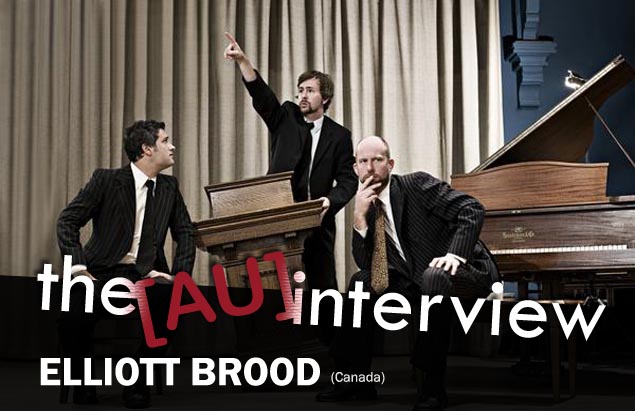 Just in time for their first showcase at One Movement Festival, we got the chance to ask Canada’s top purveyors of death country, Elliott Brood, a few questions. Here’s what they had to say…

Welcome back to Australia! How did you find your previous stay here? Any fun stories to tell?

Last time it was spider season. They are huge and scary here. We thought we’d seen it all, until we witnessed a large tarantula-hawk-wasp pulling a wolf spider along the ground by it’s face. Aussie rules!

You are over this time for the One Movement Festival and Showcases, what are your thoughts on this kind of set up?

As long as it is a dark club, with a bit of alcohol flowing, that’s fine. We try to avoid daylight, but flourescent lighting is especially bad.

Do you treat it any different to a regular show?

We try not to.

A bit of a trick I suppose [laughs]. It’s wonderful to have a moniker. Everyone should try it. It allows you the freedom to create under the guise of a character, and that character adapts more readily than one’s own
stubborn personality.

Who would you consider to be your main influences?

Could you talk a little about your creative process, how you craft your songs/albums?

Sounds are important, and sonics are a primary influence. We piece together melodies and choruses from there, things that sound good to us.

I read that you have a penchant for choosing interesting room tones when recording, what sort of places have you been recording?

Room tone is a definite factor. We definitely go “mobile” when on the road, and have used town halls, mountain cabins, a former abattoir, cube van, BC rainforest… We always mic the natural reverb that’s around.

Could you tell us a little about your motivation for your latest records, what brought you to that particular event?

We discovered and learned about the “Mountain Meadows Massacre” (Utah 1857) during the recording of the album, and found that not only were we taken by the juxtaposition of the title to it’s terrifying
subject matter, we also had several songs that could loosely pertain to the events in one way or another. The album is not about the massacre per se, but served as a jumping off point, thematically.

How has the new album been received, by fans and critics alike?

People seem to like it. Our fanbase has grown exponentially since the release of this album, and it has received several critical award nominations in Canada.

Do you have any particular songs you like playing live the most?

What can audiences expect from an Elliott Brood live show?

To get involved, and be standing by the end of it.