Ten years ago this month, Sleigh Bells released their debut LP Treats – an album which I gave a perfect 10 out of 10 score.

In a period where it felt like so many albums were feeling like carbon copies of things that had come before, Treats was a breath of fresh air. It was unapologetic fun, delivered with a lo-fi swagger that ultimately proved impossible for the band to reproduce in future releases. Not that what came next wasn’t enjoyable – it just didn’t have that same fresh, DIY feel that made Treats the success it was.

Re-reading my original review, which is copied below, it’s fair to say I had one of the most visceral responses to a new record in years when I first put it on, and it resulted in one of the more hyperbolic pieces of my early writing career. But it did capture that experience as someone in their early twenties, listening to the record for the first time pretty well.

Listening back to the record today, ten years later (older, not necessarily wiser) it’s fair to say I wouldn’t give it the same score today, but in the same breath it remains a thrilling experience to listen to and there’s still not a track that I’d skip. So it wouldn’t be far off. The album takes me back to running amok in Sydney, dancing the night away at Spectrum and truly having no idea what I was doing.

Treats remains a true gem of 2010, and an album that whenever it comes on my playlists makes me ask – why don’t I put this record on more often? So, for both of us, here it is:

Read our interview with Sleigh Bells at Big Day Out 2013, HERE. 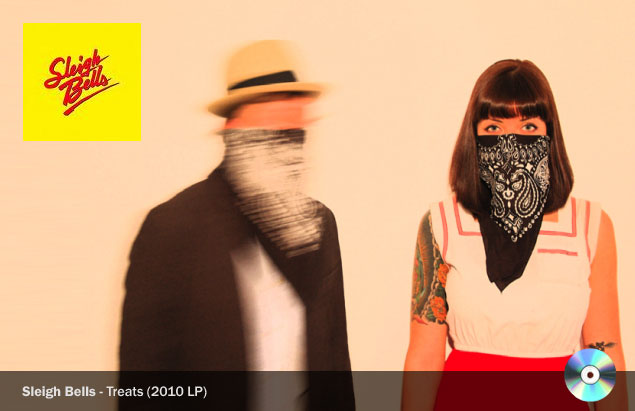 Remember Crystal Castles? While they made a few catchy songs, to be completely honest, it got a bit tiresome after listening to 3 or 4 songs in a row. I don’t think I’ve ever been able to listen to the album from start to finish, yet at the same time I would still consider myself a fan. I guess I always just assumed that this sort of music HAD to be like that. So when I was given Sleigh Bells debut LP, Treats, a masterpiece of modern music, all I had to say was this: I guess it doesn’t.

Now that’s not to say that I would immediately throw Crystal Castles and Sleigh Bells into the same category – I just think there are enough similarities to help with a description of the Sleigh Bells sound. Both are a duo who could easily be a five piece (in this case made up of Alexis Krauss and Derek Miller). Both use strange samples, with occasionally inaudible lyrics, produced in a justifiable lo-fi way with a single purpose: to get the party started. But Sleigh Bells take this concept to the next level, drawing influences from all sides of the music stratosphere to create what is not only the most original album I’ve come across in years, but something palatable from start to finish. Try NOT listening to this album five times in a row after the first time – I dare you!

But it’s here that the similarities end – so how do you begin to describe the sound? Well, you take the style that Crystal Castles find so endearing, but you replace the Nintendo influences with a some Crunk and Hip Hop inspired beats, some air guitar riffs, a few Tim and Eric sound effects (the screaming baby, mainly), the creativity of Animal Collective and the distortion of the early Hot Hot Heat records, or anything Le Tigre has ever done – you put it all into a blender, throw it out your window, set it on fire, then put it into a bowl and pour it into your ears via a funnel. You then, especially during “Crown on the Ground”, discover moments of pure insanity within, where all you want to do is jump on your bed and then THROW IT OUT THE WINDOW and get sweet numchuck skills and do backflips. I guess what I’m trying to say is the energy is palpable. Also, that “Crown on the Ground” is the best song on the album, hands down. That said, there are no weak points; I really feel this is an album meant to be enjoyed from start to finish.

The lyrics of songs like “Rill Rill”, the first single off the album, are entertaining in their own right, too: “Wonder what your boyfriend thinks about your braces? What about them? I’m all about them!”. Genius. I mean ridiculous and even idiotic at times, but genius all the same. And although Alexis Krauss delivers them drowned in distortion, it remains approachable – even endearing. But the lyrics rarely take centre focus on any track – although as in “Rill Rill”, they occasionally become sound bites. “A/B Machines”, too, gives us one of the few 2am chant moments of the album: “Got my A Machines on the table, got my B Machines in the drawer” – which, aside from a screaming child, is the only lyric of the song. But you still find yourself singing along… wait, make that screaming along… from start to finish.

“Tell ‘Em”, which kicks the album off is yet another bright spot of the album, as it eases you into what’s about to come. It’s the new single, a catchy track with 50 seconds of distorted guitars and electronic drums, before Alexis’ voice comes in, singing about “boys these days”, giving you that immediate “I totally get what this is all about” feeling. “Treats”, meanwhile, works as a spectacular closer, leading you to return to the start of the album almost instantly. This is also where I smell quite a bit of the Hip Hop / Crunk beat influence. Listen the song and imagine Lil’ Jon singing over the top of it. OK, now imagine Lil’ Jon on acid singing over the top of it. See! There you go, you got it!

While it may have just turned into Winter down in Australia, this is going to be the album of the Summer for the rest of the world – and we’ll be listening to it just as much, awaiting the days we can return to the beach, have a beer in the sun, and crank this music up to 11. Just don’t keep any firearms nearby. Shit could get messy. And with that, there’s only one thing left to say: Daring, original, with energy beyond belief – Treats is fucking perfection. Now press repeat.

Treats was released in Australia, 18th June 2010 on Liberator Music. It originally received a 10 out of 10 in the review by Larry Heath.