Sydney Uni's Verge Festival kicks off on August 31st with Guineafowl, The Holidays and more 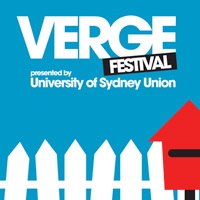 Established talent collides with the emerging when Verge Festival returns to the University of Sydney in 2011. On 31 August Verge Festival docks on the shores of the University of Sydney campus and brings with it live music, interactive installation art, theatre, comedy, panel discussions and pulsing parties. A focal point of Sydney’s alternative arts scene, Verge was showcasing the unconventional and unexpected before “fringe” thinkers and latte drinkers even made eye-contact.

Culture casts its anchor on day one, where artist groups will transform nine shipping containers lining Eastern Avenue into walk-in masterpieces for the Uncontainable outdoor installation. For the next 10 days guests will be swinging, thinking and giggling, starting with a kick-off party presided over by social change dynamos Major Raiser. Then, when The Holidays, Megastick Fanfare, Fishing and Guineafowl rock Manning Bar’s Birthday bash, while funny men, Greg Fleet and Jon Dore, amp up the hilarity stakes for The Best Damn Comedy Show Ever.

The Verge Festival Tent returns as the hub of proceedings, and they’ve gone and left renegade creatives, Punk Monk Collective in charge of interior decorating… consequences as yet unknown. Plus, iconic University locales Manning Bar, the Great Hall and new bar, Wine Cellar in the Holme Building will too become pumping venues within Verge’s armada.

This year’s student festival directors Tom Walker and Harriet Gilles have struck a party mix that has something for everybody. Where else but Verge can you sit down to some Harry Potter-themed Trivia in the Hogwarts-esque Great Hall, catch hilarious improv at Theatresports, or see Kanye the Musical at the Wine Cellar? It all begins 31 August, come explore!