Sydney has just lost one of it’s most iconic live music small venues, The Newsagency. Managed by Alison Avron (pictured above) since it opened in its first location in 2011, it has proven to be one of the city’s bright lights for hosting intimate gigs in Sydney – bringing consistent life to a city hit hard by lock out laws.

It’s no secret that the arts industry was hit hard by the Covid-19 pandemic; venues who had barely survived the lock out laws in Sydney were forced to shutter, while touring was brought to a standstill.

Government aid to support the industry has been woefully slow, and only now, six months after the pandemic struck, are funds being made available (and even then, as The Guardian reports, the industry may be waiting still another three months).

The low level of priority prescribed to the thousands of jobs and billions of dollars generated by the arts, on behalf of Federal and State Governments is breathtaking. 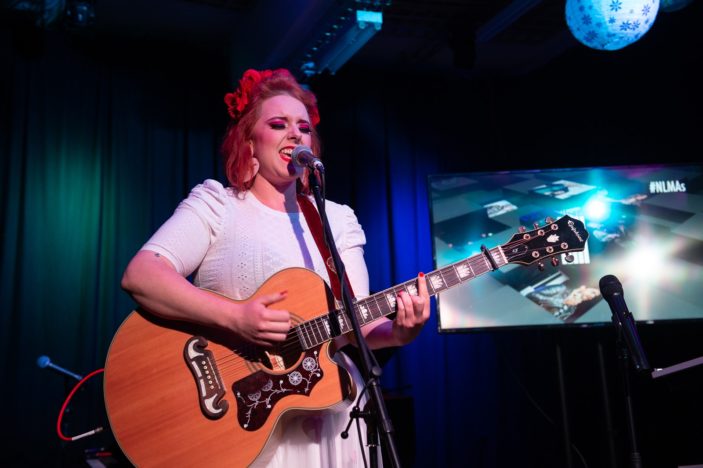 The Newsagency, as with all live venues in Australia, was forced to close for months. With restrictions easing, the venue reopened earlier this month, with a newly designed bar area and a reduced capacity.

However, within days of re-opening, Avron received a letter from her landlord. She had two options – neither of them palatable during these trying times. She had to either sign a new lease at a significantly higher rate, or she had to vacate the premises within 30 days. With the forced restrictions of social distancing in-place, Avron was left with little choice but to pull down the shutters.

The decision of the landlord to seek a rental increase during a pandemic is contrary to the message proscribed by The Prime Minister recently. He stated: “landlords will be among those who are going to be making sacrifices in the months ahead, and everyone does have that role to play”. Unfortunately, in this case, that request has not been heeded (you can read additional comments from Avron’s landlord Dylan Lopez in this interview at news.com.au). 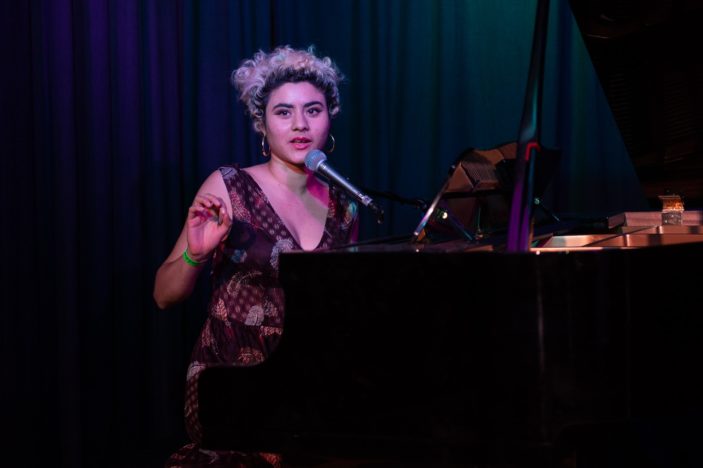 It’s crushing that any possible government assistance is too late to help in this instance. The irony is not lost, that if the landlord had been a little more patient, the arts programs for respite funds may well have bridged the gap in rent which he was after. One particular grant system, which was promised all the way back at the last election, has been appropriated specifically for venues.

As it was repeatedly broadcast by the industry during the lock out law debate, small venues in particular are absolutely essential to a healthy live music scene and economy, and now they’re the first on the cutting block as the casualties of the pandemic become apparant. Another Sydney institution, Cafe Lounge, recently closed its doors after 20 years. Both venues proved to be a great nursery for many artists.

Alex The Astronaut, who released her debut LP last week, held her first Sydney concert at The Newsagency. Mel Cheng, who works with the acclaimed artist, reflected on that show in a Facebook comment on a farewell post by the venue: “Thanks for dedicating your time, energy and heart to creating a launching space for so many great artists. I’ll never forget Alex the Astronaut’s first ever hot, cramped and sweaty show.”

Other artists including Fanny Lumsden, Leah Flanagan and a myriad of industry figures all lined up their support for Ali and the venue in other comments on the post (seen below).

Imogen Clark, who had an album release herself last week, in her brilliant EP The Making of Me, also had some of her first shows at the venue.

She reflected on playing there with the AU, saying, “I’m heartbroken to hear of the closure of the Newsagency. Some of my first gigs in Sydney were at Ali’s venue, and I always remember feeling an overwhelming sense of support for artists at all stages in their career and pure passion for music within those walls. Ali has worked herself to the bone for so many years to help keep live music alive in this city, and Sydney is lucky to have her.” 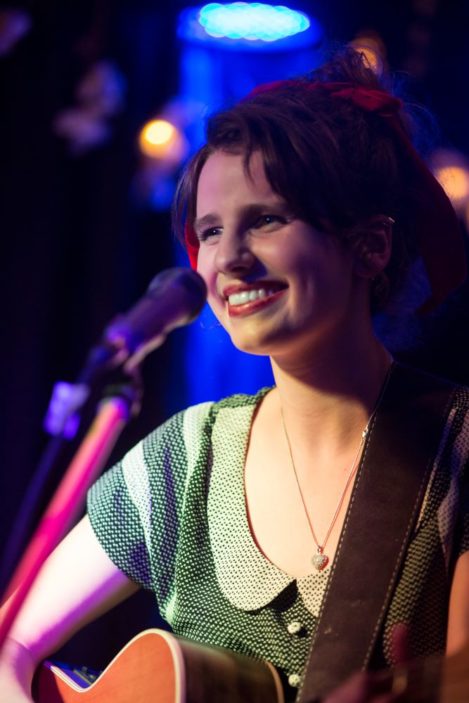 It wasn’t just emerging artists like Imogen who played at The Newsagency on their pathway through the industry. Artists played there because it was a safe welcoming space. Some used it to try out new material, others played there because they wanted to do an ‘unplugged’ set. One established artist who played there many times was Elana Stone, of the Aria-winning quartet, All Our Exes Live in Texas.

Stone reflected to the AU on her experiences with Avron and The Newsagency.

“The Newsagency was a home to me back in 2011/12 when it first opened in Marrickville. It was Ali’s house but it was open to musicians to test out new material and have it land on the fresh ears of a sold out room with a capacity of 30. Ali did the sound. Ali did the door. Ali brought the sunshine and the lights. The Newsagency was infused with her spirit and her spirit is enormous. No matter how big the venue gets, Ali fills it with her beautiful smile and love of music and people.

The closing of The Newsagency is a loss to Sydney at a time when we are tragically short of performance spaces. These spaces should be protected as they bring joy, culture and revenue to a city that is becoming sadly devoid of cultural expression. Venues like The Newsagency should be valued at least as much as the casinos are in this city.

Hopefully Ali will survive this loss to resurrect this beautiful venue again elsewhere.” 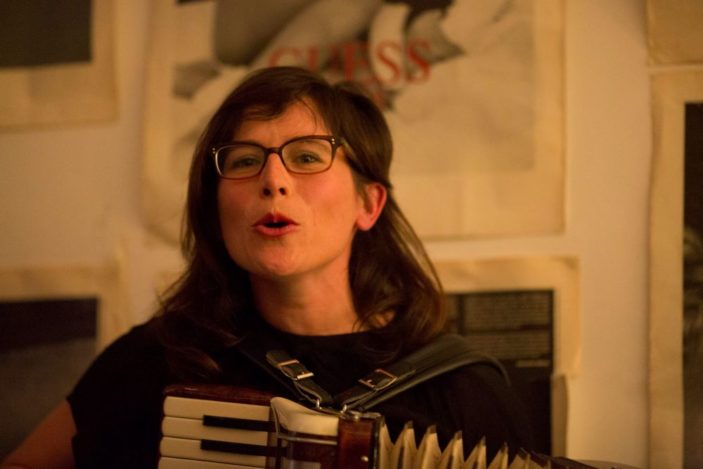 It’s a venue which has hosted and welcomed diversity. Apart from the singer/songwriter nights, there has been Harry Potter Trivia nights, the Sideshow Festival, the National Live Music Awards, Comedy nights and Open Mic nights. It has been a truly inclusive venue for the arts.

Our website’s founder (who also runs the NLMAs), Larry Heath, even helped break in the venue by holding his 30th Birthday there just before they opened their doors. He had this to say about the venue and its closure:

“I count Ali as a dear friend in this industry and I’m devastated by this news, especially after so much good faith was put into her re-opening the venue earlier this month. Every event I’ve been at at the venue has been one of fun, great music and warmth. Ali did everything to ensure her space was filled with a beautiful atmosphere that you’ll find in few venues, anywhere in the world. The calibre of artists who would play the space for that very reason is not to be ignored.”

“My thoughts are with Ali and her team, and all venues who are struggling right now. This is not an isolated case and it’s incumbent on our government to ensure local businesses are protected through this time – otherwise what sort of city will we be going back to when the dust has settled? To think we finally got out of lock out laws only to have a pandemic come and level our night life again… it’s truly a tragedy, and for the most part has been entirely avoidable.”

It’s with great sadness we say goodbye to The Newsagency. We hope that Alison Avron and her team find the energy to start again, because the first two versions, originally in Marrickville and then in Camperdown, have provided an important and irreplaceable platform for the local arts community. And after the loss of other venues in Sydney like Cafe Lounge, it’s a trend we’re glad to see the government begin to address – but for all too many, it may be too little, too late. 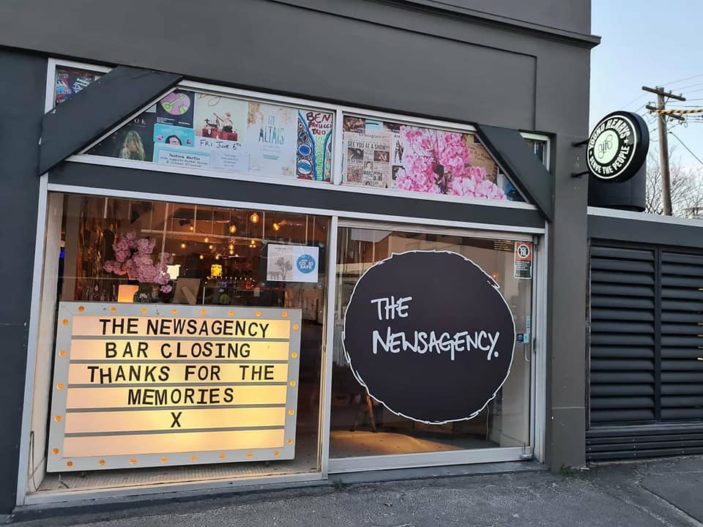 Keep an eye on The Newsagency’s Facebook Page on the off chance anything changes with Alison’s situation, or if they are able to open in a new location.

Photo Credit: Alison Avron, Montaigne & Alice Terry at the 2019 National Live Music Awards – Photos by Johnny Au. Photos of Elana Stone and Imogen Clark by Bruce Baker. The final photo has been provided by the venue.