SXSW Thursday: The Aussie BBQ bring some of our best to Austin’s Australia House 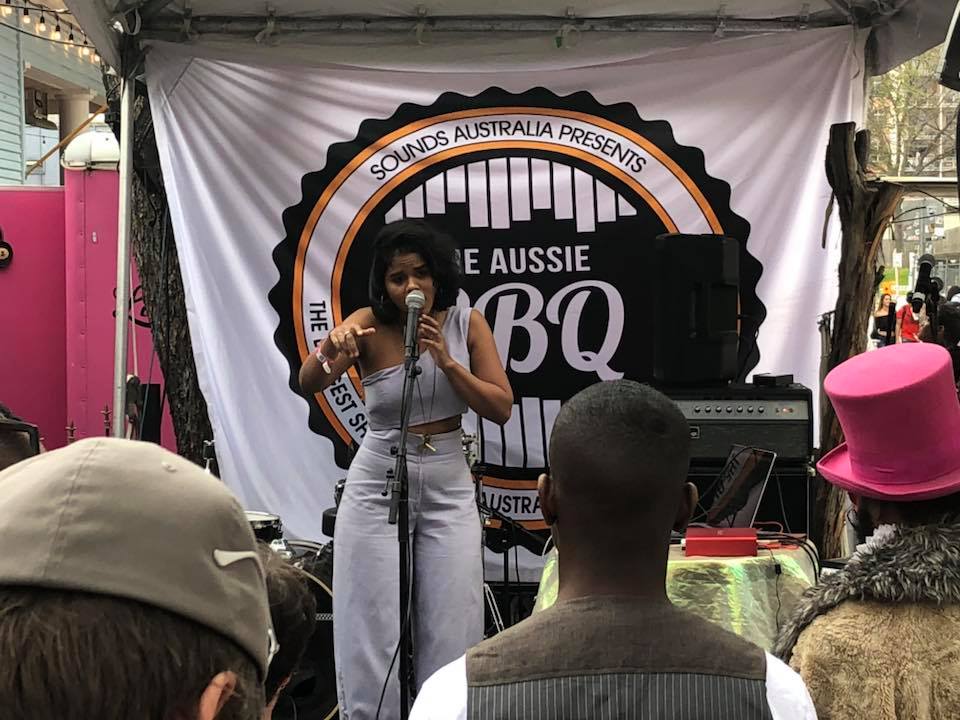 Australia House and G’Day USA weren’t messing around when it came to this year’s The Aussie BBQ, kick starting the annual showcase event with nothing but top quality Australian music, sweeping through everything from one of the country’s most dynamic (and intense) indie-rock acts Bad Pony on the Backyard Stage to the delicate sounds and emotional refrains of harpist-vocalist Elsz on the narrow Front Yard stage.

Free sausage sangas and Laughing Man coffee (and beer, of course) kept everyone fuelled through all the performances, which started at 11am with Melbourne’s Divide and Desolve and Newcastle’s Vacations. From there it was unmissable performance after unmissable performance, as careful curation highlighted the best new Australian music from both up-and-coming acts and veterans of the scene. The very reliable Thandi Phoenix was an early highlight, as was Sydney indies, the aforementioned Bad Pony who gave it their absolute all with some absolutely intense (and loud) breakdowns that tugged the rougher styles of hard rock and mixed it in beautifully with more blissful and bright indie-pop.

The crowd didn’t mind awkwardly shuffling back and forth between the front and back of Australia House, where acts were evenly distributed and smoothly ran one after another with no trace of tardiness (hard for a festival as hectic and anti-sleep as SXSW). Aussie treasure Juanita Stein attracted more and more people off the street with her endearing Aussie twang.

Vowws was one of the day’s big highlights, bringing those heavier, more rounded soundscapes with urgent elements and hazy duo-vocals, opening up their sound and ushering listeners into what was often deliciously dark walls of sound. The Sydney-to-L.A band couldn’t have been any more different to the performance that preceded them, another Aussie living in U.S: Elsz. The mesmerising solo artist writhed around the front stage with hypnotic vocals, floating well beyond Australia House anchored only by a portable harp, with which she added some incredible plucky textures to lo-fi beats.

Perth band Calmly showcased their beautifully written songs in the Back Yard, right before the day’s most unique and memorable act headed up the Front Stage. That was of course Small Island Big Song, a group that represents unity across 16 island nations. Though not all members were present (that would require a very big stage) at the actual Australia House, the harmonic music they produced as so big and full of life that it seemed like all of them were present. The collective of First Nation artists was so moving and strong that many people outside on Rainey Street would stop in their tracks and peep over the gate to see what was happening.

Elswhere, Rachel Ray’s Feedback Showcase – which will host a huge Saturday day party this weekend – began its run just a short walk from the constant action of Rainey Street. The incredibly stylish Jukebox the Ghost opened things up here, brightening up the stage with their Queen-esque power pop to set the tone for what should be one of the most essential houses of the festival’s remaining days.

Hip hop fans got a special treat over at Fader Fort with a surprise – albeit very short – appearance from Raekwon right before buzz act SOB X RBE satisfied the need for something more “lit” that obviously permeated the younger crowd. Earlier in the day, the ridiculously popular outdoor stage hosted everything from hard-toothed West Coast rap (G Perico) to the indie stylings of Soccer Mommy.

Back on Rainey Street, the Container Bar hit its peak with the venue’s busiest day yet thanks to an RCA showcase headlined by an impeccably choreographed set from Tinashe, who has been working hard this SXSW with a handful of showcases, each with different set lists. The “Faded Love” singer was so popular that a small crowd built on the street by the side of the venue, people desperately watching through the thin banners on the side of the house.

Showtime, Maltesers and Twix all got their equal foot in on Rainey Street and each shared moments of “fuck this queue is long” frustration, particularly Twix House who managed to get super popular local heroes Ghostland Observatory to perform. And Pandora finished up their run of showcases for 2018 with Dashboard Confessional and many more.

Fans of Texas’ distinctive hip hop scene got a special showcase from the legendary Trae the Truth who hosted some of his friends over at Empire Control Room & Garage, mostly bringing in trap rappers and melodic Houston emcees, all with a tough sound as the bass boomed from the outdoor stage with acts like Zaytoven, the very exciting Zoey Dollaz, and Trae himself who packed out the stage with guests and a very, very deep entourage.

Stay tuned tomorrow as the final two days of SXSW begin. We’ve still got a very special house in honour of Miles Davis, the final day of Fader Fort, Sound Gallery at Australia House, a big Mass Appeal BBQ to celebrate the new Netflix show Rapture, The Roots jamming with some special guests (including Ludacris), and much more.