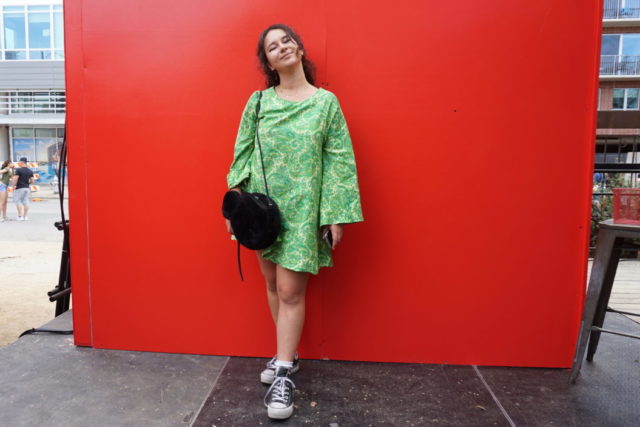 Mallrat is a name fast gaining traction and renown amongst Australian music fans but for Texans and those visiting SXSW this year, this was a perfect introduction to the Aussie currently preparing to take more international sectors by storm. We caught up with Mallrat to find out more about her time in the US, and what’s coming up next.

We were just saying, you know, it’s been a few days that you’ve been in town for. You’ve done quite a few shows already. Wrap it up for me, what’s the experience been like?

What are some of those differences? What have you noticed?

Everything here is so big. Every building is huge and all the signs…the meal portions is so huge, and also everything is really sweet. Food is really sweet. It’s kind of freaky. I went to go get a soy latte and it tasted like a milkshake, and I was like, “Ohhhh, I don’t know about this.” Pretty interesting.

Yeah, it’s a different world, but you’re enjoying it?

How have you found the current response to be to the show? It’s obviously a little bit different from playing a normal show.

Definitely. The first two that I did, I was a little bit freaked out because it was so industry feeling, and then I was like, “No, I’ve gotta make it work, and just finesse the set a little bit to be more appropriate,” then it was sweet, and it was really fun.

We had a really cool show with Urban Outfitters yesterday, and that was my favourite because it was a younger crowd, so it felt a little bit more like shows at home. It was really cool. It’s really nice meeting everybody.

You’ve got a big year ahead, but let’s first look at the most recent events that have lead into this trip. Obviously you had the success of “Better” on the Hottest 100, and then a week or so later, you dropped “UFO” so really big start to the year.

Thank you. Yeah, it’s been really cool. It’s been such a cool start to the year. We had the Post Malone shows in January too, and that was sick. It’s been so good. I can’t wait to put more music out and see what everybody thinks. I think you’ll like it. It’s been cool.

You’ve got In The Sky coming out, your debut … would it be your debut EP?

Second EP, yeah, but it’s been ages since the first one. I’m so excited for it.

I imagine “UFO” is our first taste of that?

Yeah, “Better” and “UFO” are both from this EP, and there will be another single called “Groceries.” You’ve got the inside scoop on that. That’s probably the next single.

You’ve been playing that at some of the shows here, right?

No, never have before.

Have you been playing any kind of unreleased songs as part of your set?

No, I don’t usually do that. I really enjoy when people can sing along. That’s the fun bit of playing, so I’d rather just make it a more engaging thing rather than just showing off stuff that I like. It’s not about me, it’s about everyone having a nice time.

Yeah, it’s been really good. I’ve just been feeling super productive lately. When I’m at home, I write a little lyrics on my own, and then I head into the studio, put a brand, and then build instrumentals to go with it. That’s been really fun.

Working with someone like Allday on “UFO”… does he come in and write the lyrics for his verse or?

Yeah, I just sent that off to him because we were in different places at the time. That was the day we were both in Melbourne, so we had a really fun studio session with this guy called Fossa Beats, who is producing. It’s just so fun. I would love working with Allday. He’s one of my best friends ever. So cool.

He’s been very supportive and introduced me to his audience and really gave me a cool opportunity in front of people that would like my music because it’s a lot that overlaps, so it’s been really cool, yeah. He’s just the best.

Is there anyone that you caught up with here or seen here that you’d go, “Oh, I love to work with them one day?” You must be getting to see a little bit of music while you’re here.

No, I haven’t gotten to see any, unfortunately, except for Stella Donnelly here…

She played right after you at the Twitter party.

Yeah, that’s unfortunately all I’ve gotten to see so far, but I really wanted to see Lil Zen, but he cancelled. And I wanted to see Smoked Purp last night, but we didn’t end up going to that. I’ve just been too busy, unfortunately!

What’s been the best thing you’ve seen here outside of music and all that? Have you stumbled across anything that you’ve felt was really cool?

I like that everyone says “y’all.” That’s my favourite thing.

And the milkshakes that may or may not be lattes.

Looking ahead to the rest of the year after you leave here, you’re going to be heading over to London later in the month, where you’ll be playing a show before you come back to this part of the world for more shows before you go back to Australia for a run of shows in June.

This looks like kind of your year now. You’re running around touring and previewing your wears to audiences around the world.

Is this your first time to London?

Yeah. Actually, I’ve been there before, but just to visit. Never done anything music over there.

You must be looking forward to taking that off the list next.

I’m so excited, and I think it’s going to be a really cool crowd, as well. I’ve got a few friends who come from Australia living over there now, so I’m excited to see their faces again, too.

There’s so many expats living there, and you’ll probably have a crowd mostly of Aussies, but that’s fine.

Coming back here, as well, you’re going to be doing a show at the Echo in LA, and that’s a pretty iconic thing.

You’ve got, as you mentioned, you’ve got your DJ here with you and you’re kind of getting to experience all this together. That must be a good thing to be able to share that with someone, as well.

Not to discredit, the setup, but are you looking in the future to kind of add anymore live elements to the mix and drums or whatever it might be?

I’ve got a friend called Tyne-James Organ, who I’ve love to play with, so hopefully … I hope he’s free for the next tour. I want to bring him. I’m going to ask him. I haven’t asked him yet. He’s a really beautiful guitarist and singer/songwriter, so I love playing with him.

I mean, especially when you’re hanging out with artists in Australia and see the kinds of things they do, you must be … look at some of those and go, “Yeah, I’d like to do something like that one day.”

It’s cool. I love the idea of having a band. It’s so much easier and cheaper to not have a band, but…

With your music, you’re always going to have an electronic element to it, so that’s always going to be necessary, but adding that mix … that mixed element would be interesting.

I’ve been trying to get better at the guitar for ages, but I just haven’t got that confidence. I feel like I’ve been a beginner for years.

Do you ever write music on the guitar?

Yeah, I do, but it’s really basic chords, but it’s so helpful for writing. Same with the keyboard. I’m not excellent at it, in fact I’m quite bad at it, so … it really does does the job, getting that initial idea down.