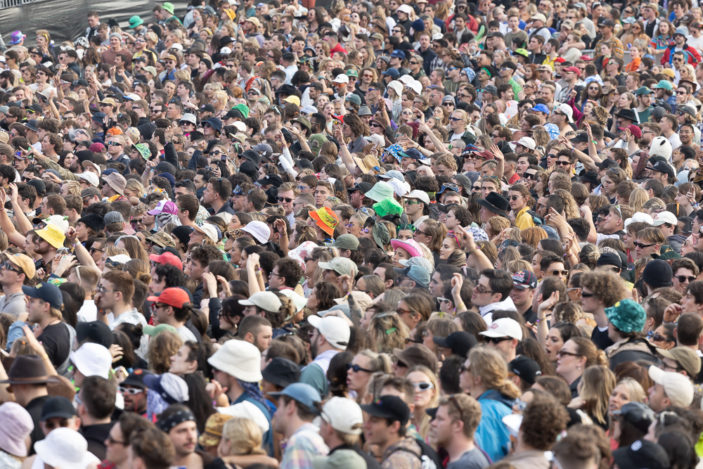 Day Two of the festivities at Splendour in the Grass had a slow start as punters wearily emerged from their tents in the mid-morning. With the sun trying to break through, overalls and footy shorts made a regular appearance. Bin bags taped around ankles also became a substitute for gumboots after Friday’s wet welcome.

Shout out to That Arancini Guy and Schnitzels Made Fresh for the tasty food! Those mozzarella balls and chip schnitty wraps were the bomb, and the hour wait for coffee from The Bloody Good Food Co. was worth it.

Tasman Keith kicked things into gear early on with his energetic set of R&B-style trap, backed by a live band and hype man.

Everyone’s favourite larrikins The Chats filled out the Amphitheatre and entertained with their on-stage antics. Sunsoaked Aussie punk with a cover of “Rock and Roll All Nite” by Kiss had the crowd headbanging in double-time. 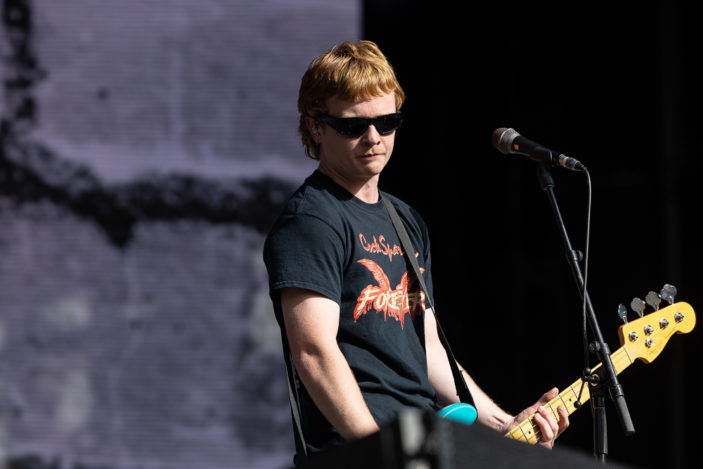 Fans went wild for party starters The Jungle Giants, especially when they brought out Sycco for “Treat You Right” after their opener. Crowd participation included a beer chug dare and disposable film cameras thrown to the front row.

Oliver Tree emerged in the most memorable outfit with abundant profanity and comical dance moves. He even brought out What So Not for “Mr. Regular”.

At the other end, crowdpleasers Triple One had everyone chanting their catchy hip hop hooks. Obi Ill jumped down to get dirty with fans before throwing inflatable rafts out to pass around.

If there was anyone you didn’t want to miss, it would have been Violent Soho. After announcing a hiatus and farewell tour last week, their fervent performance with melodic moments may have been the last time many will see them. The set featured mosh pits with fans singing acapella at times and a humble bow from the band.

Jack Harlow impressively performed in the Amphitheatre alone, even without a DJ on stage. He frequently stopped when a fan gave a thumbs down as instructed so they could get help.

Back at the Mix Up stage, Chillinit began his supercharged set by offering out a $2500 jacket then a $200 singlet before launching his energetic hits.

To round the night out, a packed Amphitheatre roared for The Strokes as they went straight from one song to another. People lined the edges of the hill just to get a glimpse of the festival favourites in action before a sloppy trek back.

All photos by Bruce Baker. You can see more of Bruce’s photos of Day 2 HERE