Soft Powder explains the creative process behind his latest track, “Close Your Eyes” 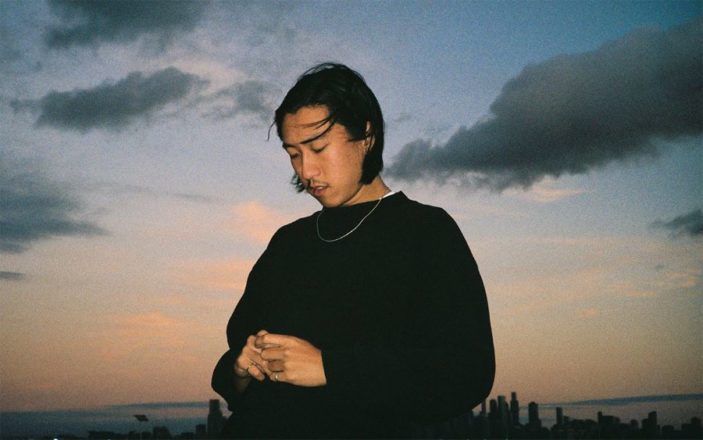 Soft Powder creates emotive lo-fi dream pop, and today he has released his debut full-length album, Somewhere Like Paradise. The album is eight tracks of shimmering shoegaze and melancholic pop. The album followed on from his two earlier EPs, Shangri-La and  Faber Ria which received widespread critical acclaim.

Soft Powder is the solo project for producer Andy Szetho. His Cantonese-Australian heritage is part of the music’s DNA, and is evident in the music and lyrics. One of the tracks on the album is “Close Your Eyes”, and was the final single before the release of the album. The track focuses on feelings of tension and uncertainty.

About “Close Your Eyes”, he writes: “The song is about finding yourself at a crossroads where you could either surrender to the temptation of wallowing in negative thoughts and memories, or you could embrace the positivity and beauty around you, allowing yourself to become consumed by these feelings of bliss. It’s about ‘closing your eyes’ and momentarily escaping this negative headspace and letting go of the tension.”

Accompanying the track, is a beautiful video that was shot by filmmaker and collaborator David Tse. About the video, Soft Powder writes: “David and I really wanted the video to convey the melancholic and somber mood of the song, whilst also capturing the nostalgic and sentimental atmosphere created in the Hong Kong and Taiwanese New Wave cinema we love.

We really wanted to film in an airport because airports conjure up all of these moods due to being a place where some people leave past lives behind whilst some people begin new chapters. There’s a lot of sentimental energy associated with airports, and they’re a place that conjures up all of these feelings of nostalgia, hope, excitement, but also regret and sadness.”

Soft Powder has kindly deconstructed the track, and given us an insight into how he put it all together. Read on and enjoy the insights.

When I initially wrote ‘Close Your Eyes’ I kind of knew that I wanted it to be centered around the idea of relief. I also made it a point to compose the music before writing the lyrics as I wanted to push myself to express the feelings I was experiencing at the time through the instrumentation. I think I was feeling quite content with most of the things happening in my life when I was writing ‘Close Your Eyes’, something that I hadn’t felt in a really long time, if ever, and I wanted to capture and embrace that euphoric feeling.

I wrote ‘Close Your Eyes’ around the drum machine beat that you hear throughout the song. I wanted to come up with a really cheesy, almost tongue-in-cheek, 80s inspired dancefloor beat, a slow but dancey one you’d hear at the prom or something lol – I was listening to a lot of Madonna and Pet Shop boys at the time. After coming up with the basic, repetitive kick and snare beat, I added in the claps and 80s toms which I sampled from my synth, and I also tried to make the beat sound endless, like it could go on forever.

As soon as I’d written and recorded the drum machine beat, I knew exactly how the guitars and synths were going to sound. I envisaged sparkly, glistening, and fragile sounding guitars, and warm, wide, enveloping synth pads, and chords that sound kind of uplifting and hopeful, but nostalgic and somber at the same time. I was listening to lots of Brian Eno and The Wake, and I’d been playing around with my Juno 106 synth quite a bit, which explains how those synth sounds came to be.

I’ve always been drawn to the emotions evoked by the sounds of traditional Chinese instruments such as the guzheng, dizi flute, and the erhu. I think it’s because they remind me of the soundtracks of the old Chinese films I used to watch with my grandparents when I was younger, and so when I hear them they kind of have a nostalgic, sentimental quality to them. They’re also very visual sounds, and they evoke all sorts of imagery when I hear them. Nostalgia and melancholia underpin pretty much all of my music, and the guzheng parts I wrote into the pre-chorus and chorus of ‘Close Your Eyes’ really amplified those feelings and textures.

Another central theme explored in ‘Close Your Eyes’, and one that’s related to the primary theme of relief, is the feeling of existing between two worlds. This is also a prominent theme across all of my music, but in ‘Close Your Eyes’ I mainly wanted to describe and express the feeling of letting go of this tension and experiencing relief from it. It’s about being okay or comfortable with the idea of existing in that liminal space, and allowing yourself to embrace it.