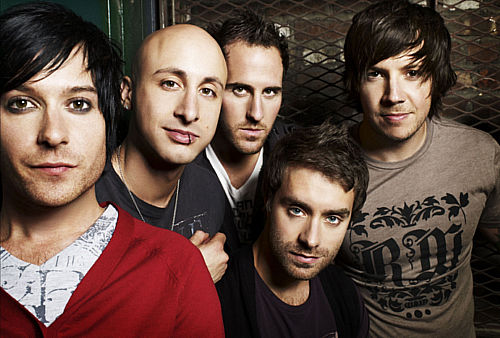 Hot news for all you punk-pop aficionados; Canadian quintet SIMPLE PLAN are returning to Australia this September for a string of shows in Brisbane, Sydney and Melbourne following the success of their latest album Get Your Heart On! (out now through Warner Music Australia).

In the 12 years since their inception in 1999, with multiplatinum albums, anthemic singles and sold-out headline tours all over the globe, Simple Plan have amassed a legion of dedicated Australian fans who will surely be pleased by the announcement of their return.

Now the band are back with Get Your Heart On!, a gloriously fun, boundlessly melodic slice of poppy modern-rock that finds Simple Plan returning to the revved-up energy of No Pads,No Helmets…Just Balls and Still Not Getting Any after taking a slight detour with a darker, more beat-driven sound on their previous self-titled album.

The irresistibly catchy ARIA Top 10 single ‘Jetlag’ (featuring British pop songstress Natasha Bedingfield) from Simple Plan’s fourth studio album is the latest in their artillery of hits alongside ‘I’d Do Anything’, ‘Addicted’, ‘Perfect’, ‘Welcome To My Life’ and many more.

Of their last visit to Australia in 2008, Rave Magazine Brisbane roared: “Seven years, three albums, one sound: this formula equates to Simple Plan, but to watch them tear through hit after hit with energy and enjoyment is to know that their attitude towards playing music has not changed.”

Three years later, and with worldwide album sales surpassing the 7.5 million mark, Simple Plan’s live performances continue to hit home with fans and critics alike: “Throughout the course of their 90+ minute show, Simple Plan serve up a packed set, jammed with fan favorites and the odd newer track…To this day, Simple Plan are still much the same band as they were back when they began, not afraid of taking chances with trying new things. They retain legions of loyal fans worldwide who will not be moved…” – AlterThePress.com (June 2011)

Simple Plan will be joined by Tonight Alive and New Empire at all shows. Don’t miss Simple Plan as they take over the East Coast with shows bound to leave audiences cheering for more!

General public on sale from 9am local time, Wednesday 10 August