Review: The Bait Fridge x Slowmango is a treacherous journey of the appendix 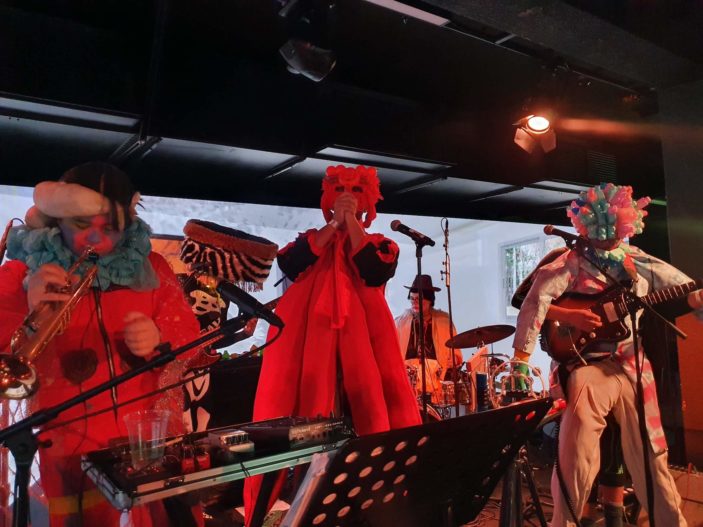 With a title as diverse as “The Bait Fridge x Slowmango” (The hero’s journey of the Appendix), there should have been plenty of warning that this was to be no ordinary show.

The procedural steps listed the “Wild West Waiting Room” as step one. Banjo players sitting around campfires, white coated cowboys pushing tumbleweeds and sickly-looking horses all built up the expectation that something different was about to happen.

After entering The Lab, pulsating music signalled the start of the “Open highway blood stream.” The band on-stage could probably be best described as a combination of “Deliverance” and “Futurama”. White lab coats, ballooned costumes and splashes of paint combined to produce a somewhat unnerving (forgive the pun) experience.

The title of the next piece is “Wisdom Tooth Anxiety’. Minties are handed out for a group chew session. This is followed by the lungs, the heart and so much more. Each piece has its own choreographed selection, and the vast array of performers vary from the ballooned band to the deliverance style cowboys to a sublime solo celloist.

With a good two dozen contributors listed on the flyer, this is an extended performance that could easily become out of hand, yet it all held together remarkably well. When the show reaches the Gut (Paradise), with Germination and a New Age, the audience are in a state of wonder.

This is certainly a performance that is difficult to describe, but for those that experienced it, one that will live inside of them forever.

To find out what Slowmango are up to next click here