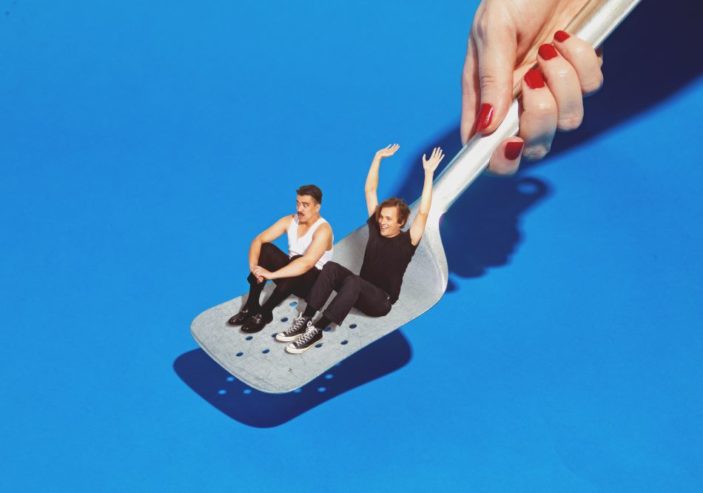 On Friday, Sydney rockers Polish Club will release their latest album, Now We’re Cookin’. They’ve teased out some singles in the past few months including “Stop for a Minute”, “Just Talking” and the sweet ballad “No Heaven”, so it’s exciting to having the full audio smorgasbord about to drop.

It’s always good to hear David Novak and JH from the band give their frank assessment of where they are at. With regards to the album, Novak says that they didn’t go overboard. “Just trim the fat,” he said. “There’s no excess, there’s no fuckin’ two-minute outros.”  They started with about 90 songs, so they had plenty to work with.

You can pre-order the album, alongside some killer merch, the links are at the bottom of the article. Polish Club also have a tour lined up to celebrate the release of the album. Details and ticket links are also below.

When not in the studio, it would seem that Novak has been on the hunt for the perfect burger. Sydney-siders, he has done the research for you. Read on.

I’m going to be completely honest with you. I’m so sick of burgers. They are just burgers. A piece of meat in between two buns. Even that is making it sound way more sexy and interesting than most burger experiences are. There are too many in Sydney. Everyone and their dog are now flipping ‘gourmet’ and ‘ridiculous’ burgers and acting like making the bun black is a Michelin star-worthy culinary revelation. I’m over it.

And yet, I find myself craving a select few pretty much every other day. Nothing beats the unctuous satisfaction of shoving one of those nasty hunks of brown down your throat. It’s the water of food. No one needs to act like it’s revolutionary, like it’s a bold new frontier in hydration. And still we crave it everyday. Nothing beats the quench of a tall, ice cold glass of the original H2O. We need it to live. Just like daily hydration, I need burgers to live. And not all burgers are made equal. Far from it.

The thing is, the tried and true formula for making a burger has stood the test of time, and people are wankers. They like to act like every new burger joint that does something different has cracked some code. They insist that Maccas is trash, that just because it’s available everywhere and made en masse, it’s not worthy of enjoyment and craving. I don’t care who you are or what your argument is, there is little better than a triple cheeseburger from Ronald. Simplicity and consistency is king in the burger world.

That’s not to say there aren’t chefs out there that aren’t doing actual innovation and exciting things with the humble burger. But that comes from a place of genuine influence from other cuisines and logical combinations of flavour, not from “fuck it, put some black colouring in the bun and make the bun a donut hahahaha.”

Anyway, before I continue to ramble on about how shit burgers can be, here are some places that don’t suck in Sydney.

Out Of The Blue (Clovelly)

There’s carrot in this one. I know, wtf. But believe me, this is the best Aussie burger in town, maybe the best burger in town. There’s no bullshit. It looks like your mum slapped it together with whatever was in the fridge. But that’s the thing, those ingredients are in your fridge because they’re quintessentials of Australian cuisine. Carrots, beetroot, a fried egg, some crusty bread rolls. It’s big, it’s sloppy, and it works whether it’s filled with beef, fish or chicken schnitty. Out Of The Blue strike the perfect balance of slamming everything you could want in between a burger bun, while also keeping it from going over the edge of being a giant mess that you can’t fit in your mouth.

If Out Of The Blue is the Australian classic, Marys is the American standard. It’s a fancy Maccas cheeseburger, the closest thing you’ll get to an In-N-Out burger in Sydney. It’s wet, but not falling apart. Filling but not huge. It’s got quality meat and ingredients without the wank price tag. Oh and they’re kind of everywhere now, so they’re easy to get.

This is an example of a fusion burger that combines the classic burger with another cuisine without feeling forced or disingenuous. The inherent focus on umami in Japanese cuisine lends itself to the sensibilities we crave from a good burger. It’s a tasteful combination of flavours that allow them to serve a normal cheeseburger that somehow tastes just that little bit Japanese, alongside more creative options like the Fish Katsu or Menchi burger. It’s the little left turns that make fusion burgers more effective.

Call it a chicken sandwich, not a burger, I don’t care. It’s all meat in a bun. And this one is LONG. Fried chicken is a dark art to me. There’s so much discrepancy in something that is seemingly so simple. Thirsty Bird nail
+it in my opinion. My choice is the Stinger. Fried chicken, coleslaw, fried cheese and special sauce. Four ingredients, that’s all you need. That, and a mastering of the dark arts. And any place where you can fuck off fries for a whole tub of mac n cheese is a winner in my book.

Anyone who thinks you have to slaughter an animal to get a good burger is quite frankly, a moron. There are so many good vegan joints around the Inner West, and many of them make really good burgers. I’d also give this spot to Lord Of The Fries. The place that I went to more than once in Melbourne before realising it was vegan. But LOTF isn’t a local joint, so I’m going with another stellar option. Green Lion’s main act is the Green Mack. As you can probably guess by the name, it’s a spin on the Big Mac. It’s about twice the size of a Big Mac and manages to make me want to sleep for a couple of days afterwards, just like Ronald’s OG burg. It’s more than worth a try, and you can nap in peace afterwards, knowing that you haven’t exacerbated the environmental disaster that is cow farts (google it).