The annual Ohana Festival, a festival born in 2016 on the beaches of California, has dropped its 2022 lineup – and it’s a beauty!

Over three days, and as many stages, on a 14,500 capacity beach in Orange County, California, the event is set to feature some of the most iconic names in music, joining Vedder himself, who is once again playing solo as one of the event’s headliners. He has appeared in this capacity every year, except 2021, when he was joined by the members of Pearl Jam.

The Pearl Jam frontman will be joined from 30th September to 2nd October by Fleetwood Mac’s Stevie Nicks, also in solo duties to close out the show on Friday, P!nk on Sunday and Jack White – who will co-headline the Saturday festivities with Vedder, and will have no less than two new albums to plug; Fear of the Dawn – a magnificent record which was just released – and Entering Heaven Alive, which comes out on 22nd July.

The lineup also features a number of our favourite artists, including Brittany Howard, St. Vincent, Dermot Kennedy, Khurangbin, Manchester Orchestra, Grouplove, Billy Strings, St. Paul and the Broken Bones, Cautious Clay, Kevin Morby and Broken Social Scene, who will be playing their iconic 2002 sophomore record You Forgot It In People, in full.

Two Australians form part of the bill – UK based, Sydney group Gang of Youths, and Sydney’s own beachside king, Dope Legend. Both are set to play on the Friday, 30th September.

It’s not the first time Gang of Youths have been added to a stacked Californian festival hosted by an iconic artist – in 2018, they were part of the Foo Fighters’ festival Cal Jam, where there was that unforgettable of Nirvana reunion.

While that one was just east of Los Angeles in San Bernadino, Ohana takes place an hour south of the city in Orange County, on the beaches of Dana Point.

Ohana Festival will take place from 30 September to 2nd October, 2022, at Doheny State Beach in Dana Point, CA, with pre-sale tickets going on sale this Wednesday.

For more details head to https://www.ohanafest.com/.

Photo of Gang of Youths by Kerrie Geier, 2019 Laneway Festival 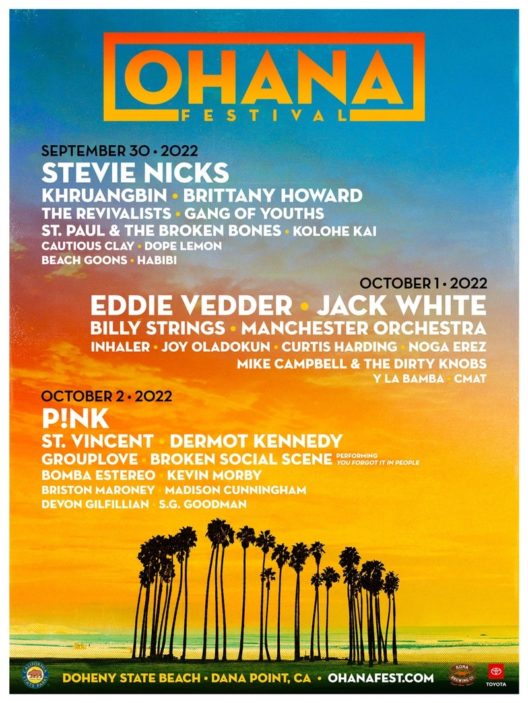