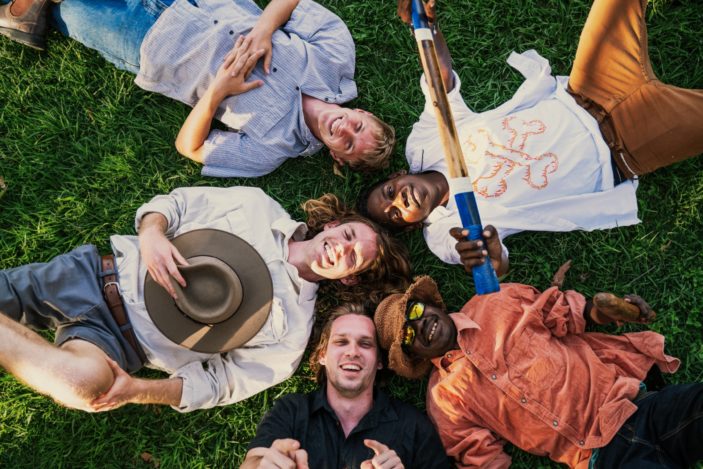 This week we’ve topped up our Discovery playlist with nine more new or recent releases. Our Track of the Week goes to AU favourites King Stingray and their fantastic new single “Camp Dog”.

The release caps off a successful run of sold-out shows, not to mention a strong showing in this years Hottest 100. The single is billed as an enduring tribute to the cheeky canines that patrol the streets of Yirrkala, the band’s hometown in North East Arnhem Land. You’ll be able to catch the band on the road again over the next couple of months, playing headline gigs as well as support slots of Ball Park Music and Midnight Oil.

This week we also have the long-awaited return of Arcade Fire. “Lightning I, II” is the first single from WE, the band’s first album in five years. Produced by Nigel Godrich, the album drops May 6th. The new single is the band as we have come to expect them: epic. It’s big, exciting and has got us hyped already for the new album.

Also joining them on the playlist are new releases from French acts Ismatricule and Black Lilys. The former brings us “All Night Long” a funky, grooving melting pot of genres. There’s a little bit of funk, a little bit of soul, some R&B, and most importantly a solid helping of good vibes. “All Night Long” is the perfect pick me up of a track. Black Lilys track “Invisible Strings” is an altogether different vibe, leaning more into the alternative pop territory of AURORA and others. Despite the perhaps slightly melancholy vibes, it’s quite bright and fresh; with a striking central vocal performance.

We’ve also added “Backseat Valentine”, the euphoric new track from Charlie Collins.  Can you believe it was written in just an hour, and the vocals were put down in a ten-minute session? Her long-awaited second album Undone is out on 29th April.