One of the unexpected Australian buzz artists at this year’s SXSW was one you may have not heard of – rising star in the Country world Rachael Fahim. She was listed as one of NPR’s artists to watch, and delivered a slew of impressive performances while in the Texas capital. We caught up with the talented artist to learn more about what brought her to Texas and what’s ahead for her in 2019.

Well, you just got off the stage at the Big Sound Brunch here at Australia House. One of your shows here for the festival. How’s it all going? It’s your first time to SXSW?

It is, yes. Look, so far, I am honestly just in heaven here. There’s music everywhere and, I don’t know, the vibe here is just insane. Everyone’s so friendly. I’m just enjoying getting out, seeing all the shows, and then getting up and doing my own thing and having people watch and appreciate. It’s great. I’m loving it.

You got some kind of last-minute buzz moving into here as well, with the NPR inclusion on their “Austin 100” playlist. What does something like that mean, as an artist being introduced to this market?

Yeah, so, when I first saw that, I was actually in shock. Because NPR in America is huge. So, for an artist like me, you know, a country music artist from Australia to get that kind of up, just before SXSW, which is already huge, it just means that so many more opportunities can … you know, I can do so much more, now that I’ve been a part of that. Yeah, it’s great.

You’re in incredible company, but not much country company.

Does it seem like there’s more opportunity here for an artist doing what you’re doing?

100%. In Australia, as much as I love it, there is a ceiling on country music. You know, that’s just because Australia is not as big as America, like population-wise, and definitely city-wise. I think you were saying earlier, we’ve got six cities, and America has a whole lot more. So, yeah, I think America, the market is just a lot … it’s harder, don’t get me wrong, it’s definitely harder, but it’s something that I definitely want to give a crack. And, you know, see how it goes.

Have you spent much time here in the past, or is this your first time here?

I came to Nashville, actually, about two years ago. Back in Aussie land, I won a competition called Toyota Starmaker. And, as part of that competition, you got some airline tickets to come over to America, and I got to go to Nashville for a couple of weeks and do some songwriting. But, since then, I haven’t been back. So, after SXSW, we are getting a car, we’re driving through Memphis, going to go see some ghost towns hopefully, that’s one thing that I want to go and check out, and then head to Nashville again, and then I’m finishing up in L.A. I’m going to go see one of my favourite artists do a show, Lennon Stella. I think she’s awesome. She’s definitely one of my influences. But, yeah, it’s just cool to be back here in America, and hopefully I can come back very, very soon, maybe for a more permanent time.

Has there been kind of conversations that that will happen, that that’s on the cards?

Yeah, yeah, there have been many conversations. But I think to try and get settled over here might take some time. So, I don’t know when, but I love it so much in America, and I think Nashville would be a great little home for me to do my country music thing in.

Last year, you released a couple of singles. Of course, “Brake Lights” was the one that got you onto the NPR list. “What I Don’t Know” is your latest single. And that came off the back of a EP the year beforehand. Talk me through a little bit about the songs you released last year, and what you’re looking ahead to releasing in the year ahead.

Last year I, as you just said, released “Brake Lights”. That song I actually didn’t write. I wish I did, definitely wish I did, but it’s a song that I found on SoundCloud. I’d just gone through a break up, and I remember the guy, when we ended it, he was in my house and he just walked out, and I remember thinking, I just want him to turn around and just want him to come back.

I found this song not long after, and it was one that I just connected to straight away, like every lyric, I felt. So, I contacted the co-writer, Emily Weisband, Nashville based, and she was like “Yup. You can release this song!” So, it’s been a crazy ride since that one. And then, because of “Brake Lights”, I was able to also release “What I Don’t Know”, which is by the same, Emily Weisband and a couple others.

So, yeah, it probably sounds like I haven’t written a lot lately, but I do write quite a bit. It’s just, when there’s an awesome song, you might as well give the writer a bit of an up. And especially in Australia, I’m not sure if there’s many writers that have songs out by Australian artists in America. 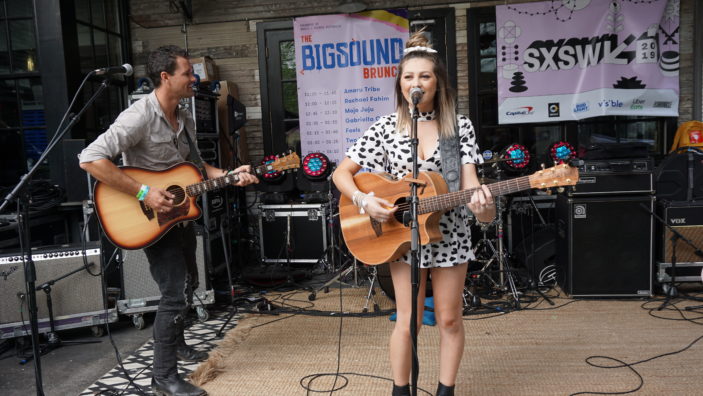 So, that’s been pretty cool. But, as far as the next few songs that I’m releasing, they’re ones that I’ve written. It’s been awesome trying to get all those ready and out. Don’t have a release date yet for anything, but hopefully soon.

Are you kind of going on a single by single trajectory right now?

At the moment, yes. Yeah. I think an EP would be awesome, another EP, but I think with the current market, with Spotify and Apple Music and all the streaming services, you kind of, in my mind, you’re kind of better off releasing singles, because they get more traction.

An album comes out and then it just … it either does well or it doesn’t, and then moves on to the next.

Exactly, yeah. So, I’m kind of liking releasing single by single, and then maybe releasing an EP with a couple of extra bonus tracks or something. I don’t know, we’ll figure it out. I’m very excited to get some more of my own stuff out there.

Amazing. And touring-wise, what’s kind of coming up for you? Obviously you’ve got to finish up SXSW first. How many shows have you done and how many have you got left?

So I’ve done, including Australia House today, I’ve done two. And then I’ve got one more tonight at Steven F.’s bar at 1:00 a.m. As far as touring goes, yeah, finish up South By, head to Nashville, have a bit of a break in L.A., and then head back home and work on getting back over here or lining up some dates over there, back in Australia, for my family and friends and anyone else who’s interested, for sure.

Have you noticed that it’d be kind of more interest at home now that you’re doing things over here? Because that often happens.

Yeah! Look, it’s been really cool, a lot of people have kind of realised that SXSW is actually an awesome, huge opportunity. I don’t think it’s as well-known in Australia by people who aren’t in the music industry.

So, a lot of my family and friends have been really supportive, and I’ve found that online, people are really jumping on to support and give me a pat on the back, and it’s really great to have everyone behind me. I really appreciate everything, yeah.

Well, it was great to see you this arvo at the Big Sound Brunch. Wish you all the best of success in the months and years ahead.

Thank you so much. Thanks for chatting to me.