Loud N Queer TV, a Sydney-based production is already in its second season. Talk about impressive, given it only launched in April this year. Born from the creative void created by COVID-19, Loud N Queer is a show filled with live music, DJ’s, comedy, chat and performance art. It has been an important outlet during this creative arctic winter, particularly so for the LGBTQI community.

Rebecca (Bec) Callandar of RACKETT fame, collaborated with Heaps Gay, which is an all-inclusive online and events community, based in Australia. Bec has worked closely with the founder of Heaps Gay, Kat Dopper. It’s fair to say that Kat is well experienced at putting on a big show, as she was also the Creative Director of the 2020 Sydney Gay and Lesbian Mardi Gras.

Two other organisations that have been instrumental in putting the shows together are the production company dplr and arts organization Create or Die. Together they donated the space, resources and skills to present a beautifully shot and presented show. Other sponsors include Listen Up Music, a mental health charity focusing on the music industry, and Buzz Speakers. More on the genesis of this amazing production later.

Hosted by Nic Kelly and Aaron Manhattan, the show has been a 2 hour(ish), extravaganza on Friday nights.  It has provided a great outlet for so many creatives in the LGBTQI community. A broad section were well represented in the show I got to witness. More than 60 artists have had the opportunity to strut their stuff on the Loud n Queer stage.

Amongst some of the stellar performances of the night, were the lip-syncing performance artist, Blaq. 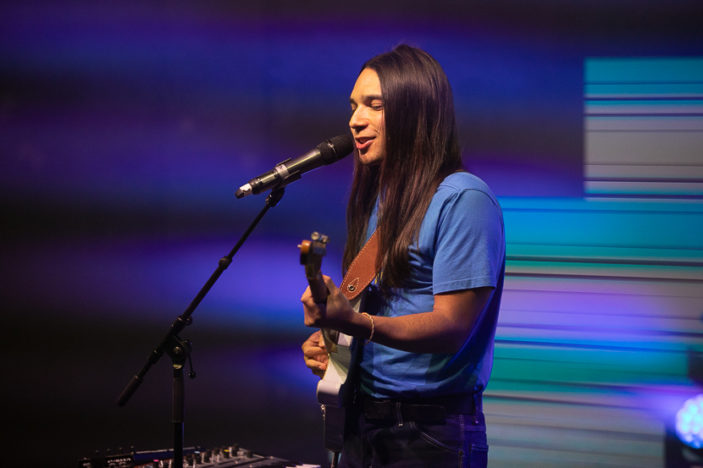 As you would expect and hope, the drag queens were well represented. The Liquor Sisters got to shimmy, shake and titillate.

The night finished off with karaoke and an all-in dance for those who performed on the show.

It is worth recounting the story of how this all kicked off. The adage of when one door closes, another one opens is particularly apt for Bec Callandar of RACKETT.

RACKETT was a guitar-driven power-pop band, with the effervescent Callandar front and centre, providing lead vocals and steering this raucous maelstrom. They performed a massive number of shows from 2017-2019, building a loyal audience around the country. When the lead guitarist and drummer left to follow their own pursuits, and with Ally, their bass player falling pregnant, Callandar was forced re-evaluate her direction.

The forced hiatus had Bec reinvent RACKETT as a more experimental electronic outfit. Bec learnt new skills programming sounds, and wrote some new tunes to showcase them. With just herself, her laptop and a new bass player, she hit the clubs and pubs. By chance, Bec landed upon the drag queens in the Pride of Our Footscray in Melbourne. They featured in the video for her hit single Oxytoxic, and she found herself with a new tribe of creatives who keenly embraced this new direction.

Lock-down then struck. Using the skills she learnt in creating the Oxytoxic video, Bec decided that she should put together an online show that embraced and showcased the creative LGBTQI community. The initial plan was to film it in her bedroom, but this quickly morphed into something much bigger. Hence the partnering with Heaps Gay and it growing into the show that it is today.

End of the night karaoke

Viewers are given the opportunity to donate, with any funds received shared amongst the creatives. A massive shoutout to dplr, Create or Die, Kat Dopper, RACKETT, Nic Kelly, Aaron Manhattan,  DJ Charlie Villa, and so many others who donated their time to this show. They have all put in a colossal effort to provide this opportunity to the artists showcased at a time when there has been such deafening silence from the Federal Government with regards to the artistic community.

It’s unsure where this show will head in the future, but hopefully a media organisation might be inspired to take it to the next level.

Header image is of the  Liquor Sisters.

Performance photos from Series 2, episode 2, filmed on the 29th May 2020 by Bruce Baker