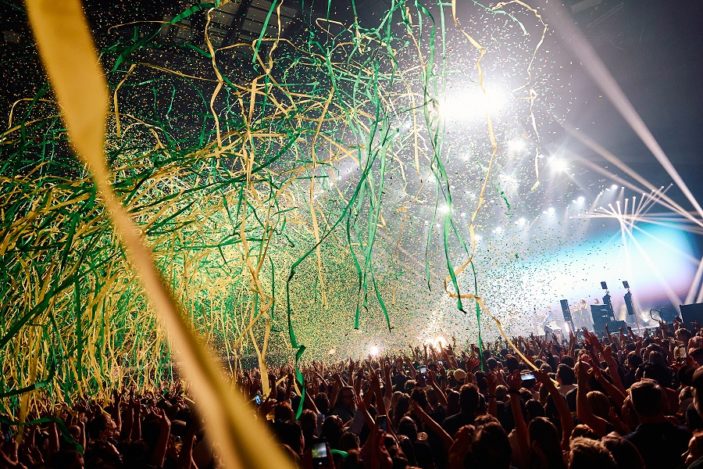 On one hand, you’ve got The Killers live at Qudos Bank Arena. Sydney’s go-to venue for stadium concerts was heaving for the Las Vegas band, long overdue for a revisit to our shores and fresh off a whopping 80+ shows as part of their global Imploding The Mirage tour. A tour, mind you, that has taken over a year to complete and has seen the band strike the perfect balance between showcasing new material and peppering in just enough hits to keep long-time fans content.

On the other hand, you had The Killers announce an encore performance just days ago at Sydney’s newest music venue, Liberty Hall (formerly Max Watts) in Entertainment Quarter. It sold out almost immediately, with just over 1,000 people packed into the relatively tiny venue – compared to where they normally play – for a very special, very rare intimate night with one of the greatest and most relatable rock & roll bands of our time.

Clap both hands together and you’ve got pure magic.

Unadulterated Las Vegas showmanship elevated by some truly creative twists and turns to old classics, and flourishes to new jams that added a layer of that gut-punching nostalgia this band always seems to excel at.

And nostalgia is very much the name of the game here. The Killers have long been a welcome presence in Australia, having performed down here numerous times and always managing to knock it out of the park. Not that it’s a particularly hard thing to do when you can claim some of the best live moments in music, from the otherwordly chant of “All These Things That I’ve Done” to the glistening riffs of “When You Were Young.”

Both songs were unsurprisingly centrepieces at both shows, with The Killers boldly busting out “When You Were Young” early in their stadium set and using it to cap the performance at Liberty Hall. A performance which ended at 2 AM.

But it wasn’t at all just about the new songs. Sure, “Mr Brightside” is always going to elicit a frenzy of flailing limbs and a chorus of impeccable fan karaoke. Sure, fan-favourites like “Read My Mind” (performed at Qudos) and “Bones” (performed at Liberty Hall) are immensely satisfying when you’re shouting the lyrics at the top of your lungs.

But the real takeaway from both shows in Sydney was just how much The Killers still have to offer after all of these years.

True talent for songwriting never really dies, and it’s a testament to the Las Vegas band that much of their newer, less familiar material succeeded in the impossible task of standing toe-to-toe with the hits. And there are a lot of hits.

This was no truer than at the second show, which unfortunately kicked off an hour later than it was supposed to. Taking advantage of the smaller setting, The Killers broke into a very fine performance of “Runaway Horses” without Phoebe Bridgers (who features on the recorded version). Flowers introduced the song as “Americana” and while there’s certainly elements of that, it’s a universal sound that reiterate that this band is as great at slower, sentimental songs as they are at those big, stadium-sized anthems.

And while the Qudos Bank Arena show was stunning, bouyed by confetti cannons and pyrotechnics that would have put Bruno Mars to shame, it was the smaller and much more exclusive Liberty Hall “midnight” show that gave fans a real close look at who The Killers are and why we should still be paying attention in 2022.

Both shows had their fair share of moments, advantages and disadvantages.

At Qudos, The Killers were clearly in a celebratory mood as Sydney was given the honour to end the entire global tour (rare for the city), and it showed with big, impressive lighting set-ups and a surprise apperance from America’s Gerry Beckley who came out briefly to sing “Sister Golden Hair” with Flowers.

But it obviously lacked the intimacy of seeing The Killers in a 1,200-capacity venue. At the sold-out “midnight” show, The Killers were up for experimenting and having just as much fun as the crowd to help bring the major tour to an end. I mean, the band did come out to The White Lotus (season 2) theme song before opening with Hot Fuss favourite “Midnight Show.” And they even managed to stuff in another big confetti pop at the peak of “All These Things That I’ve Done”.

Two very different settings and one very excellent band, demonstrating an uncanny ability for consistency that’s lost on a lot of their peers. Add a great deal of Las Vegas showmanship on top and you can imagine what it was like bouncing from one concert ot the next.