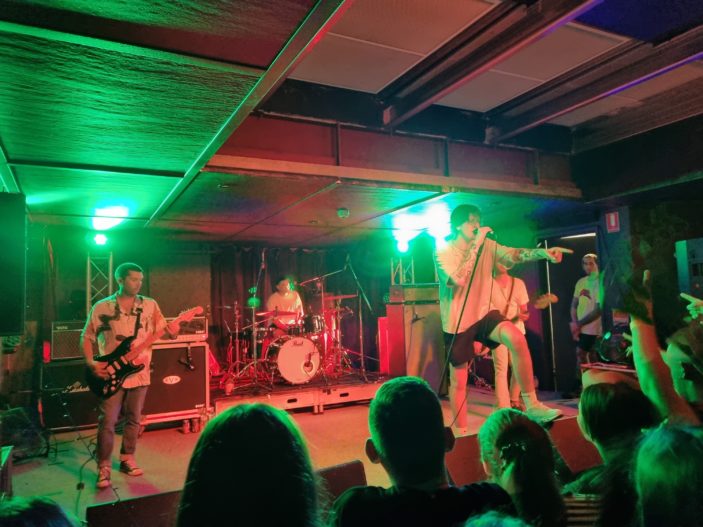 Newcastle punk favourites Trophy Eyes know how to put on a show and seeing them live is a rite of passage in the local heavy scene. The esteemed four-piece kicked off their first tour since 2020 at a packed Eleven Dive Bar in Maroochydore with Waxflower on Thursday 24 March.

It was the first of 10 extra shows added after the initial tour sold out in hours before being rescheduled from July 2021. This comes fresh off their appearance at the almighty UNIFY FOREVER festival, where they performed their seminal album Chemical Miracle in full, and man, have they been missed.

The night began with Brisbane alt-rock quartet Waxflower taking to the stage in matching black shirts with broken hearts embroidered over the chests. A set of upbeat rock tracks with poppy hooks had punters grooving with a good handful of fans singing the words in the front. Syncopated drums and intricate guitar solos were sweetened by infectious melodies and vibrant harmonies as the frontman and guitarist’s vocals blended nicely. The band performed their new song ‘The Drama Scene’, which dropped that day, and their danceable emotive jams went down like a shot of milk after something seriously spicy.

When the time came for Trophy Eyes to grace the stage, each member was welcomed one by one with swirling cheers. Adored frontman John Floreani emerged drinking Monkey Shoulder straight from the bottle in footy shorts and long socks with a huge grin on his face. The band launched into new single ’27 Club’ with the whole crowd chanting the refrain “Put me in the ground / Sell my things and snuff me out/” – a testament to the poignant and unflinching ability of his deeply personal lyricism.

By the end of the third song, Floreani had broken his in-ear monitors and was forced to continue the show with one working channel. Nevertheless, they nailed old cut ‘Heaven Sent’ with perhaps the most passionate performance of the night, frequently hitting himself in the head with the mic throughout. Anthemic single ‘Hurt’ picked the vibe up again before moving into sad singalong ‘Miming in the Choir’. An unexpected but certainly celebrated number was ‘Home Is’, bringing fans closer both literally and emotionally.

Latest single ‘Nobody Said’ had people bouncing from start to finish and led into fan-favourite ‘Chlorine’, everyone swaying and singing that heart-wrenching outro at the top of their lungs. After promising an unusual punter his shirt earlier in the night, Floreani tied it around his head and jumped into the middle of the crowd for a circle pit. The band reunited on stage to close the set with The American Dream hit ‘You Can Count on Me’, chanting “Some of my friends sell drugs / But I just sell sad songs to the ones who feel alone”.

After two years of nearly no live performances and a seemingly grim future, Trophy Eyes played for over an hour to around 200 people and never dropped the ball. With a setlist spanning from their 2014 debut album Mend, Move On to their most recent single, no stone was left unturned for fans old and new alike. The forthcoming album is shaping up to be a belter and their first headline show in years proved that the boys are eager to reconnect with their people.