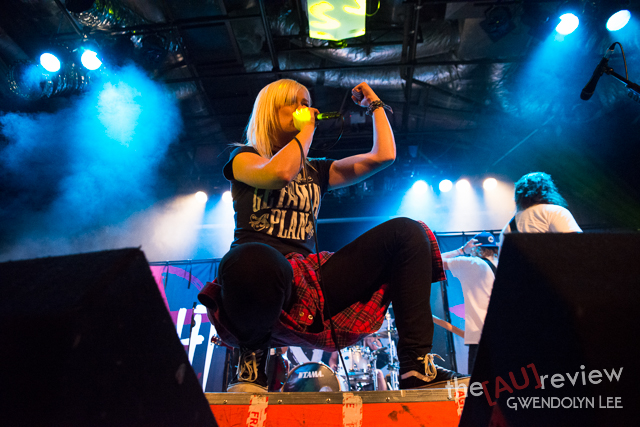 When I saw Tonight Alive at Manning Bar just over a year ago, it was easy to see that they had a lot of potential. However, as strong as their performance was, they were still a fairly new band — on stage, their presence merely asked for the audience’s attention. When I saw them this year, they demanded it.

The boys of A Sleepless Melody were onstage first, easing us into the night with their soft-rock tunes. Topics included: girls, their parents, and girls, as expected. They might not have had much in the way of variation, but the sentimental setlist won the crowd over easily, and the band looked delighted. Their best performance was the final song, “Because”, which had an acapella introduction. While the theme (girls) was similar to the other songs they played, the instrumental was vastly more sophisticated. If this is the direction they’re going in, I’ll be intrigued to hear what they release next.

Because They Can gave a very different performance. Their sound was far less polished; a quality accentuated by the vocal style of their singer, Eddie. His tendency to play around with his voice made the band more engaging as a whole, because I was never quite sure how he’d sound. The same circumstances applied to their set, which ranged from their own tracks — including the excellent “Salt”, from their debut EP Alive — to the unexpected cover of Blur’s “Song 2”. I’m always on the lookout for artists who try to do things differently, so I’ll be looking forward to catching the boys at another gig in the future.

It only took a minute of Tonight Alive being on stage for me to see that they’d grown. The “local band vibe” was gone, along with the last of their shyness. What I mean to say is, they felt like rockstars. Their heavy touring is no doubt to thank for this, because their experience and confidence radiated from the stage. Jenna’s vocals, in particular, have increased in both range and power. This improved every song, but was most noticeable in “Revenge and Its Thrills” and their cover of “Little Lion Man”, which were both a little shakier when I heard them last year.

The highlight of the night, however, came with the debut of their new track “The Ocean”, which had never been played before. The new track revealed a more mature side to the young band; a darker honesty that we’d only heard glimpses of in songs like “Listening”, or “Breaking and Entering”. Lyrics like ‘I’ve been waiting for the day that my spirit is finally free / some days it feels like the ocean lives inside of me’ are backed by crashing drums and a wiry guitar riff, making it one of their most accomplished songs so far. The band said we could have a single release in as little as ‘a couple of weeks’.

With a new studio record due this September, it doesn’t look like things will be slowing down any time soon. Hearing the new track has made me even more excited for the upcoming release and the tour that will (hopefully) follow. Until then, they’ll be playing more shows overseas, and making us Aussies proud.

Photo by Gwendolyn Lee. View the rest of the gallery here: https://www.theaureview.com/photos/tonight-alive-because-they-can-a-sleepless-melody-factory-theatre-16-05-13