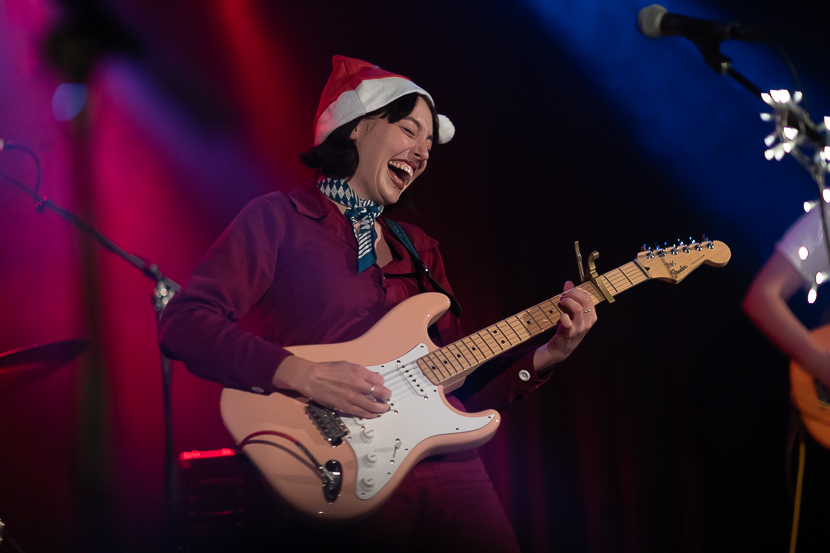 This time of year is a time for everyone to wind down, get together with friends and family, and try be as merry as possible. For many people this comes in the form of parties, family get-togethers or work Christmas parties. For Stella Donnelly, it came in the form of a national tour. Hitting the road on her Finally Made Some Friends tour, Stella brought along a band, a couple of supports and some pretty fantastic vibes to Sydney’s Oxford Art Factory.

Touring as part of Stella’s band, Jacob Diamond had the task of opening the night up. Playing a short set consisting of tracks mostly from his 2018 album Goodbye Gondwana, the blue jumpsuit wearing solo act chucked in a sneaky cover of The Sound Of Music track “Edelweiss”. Not entirely convinced he’d do a great job of it, those in attendance would probably have said the opposite, as the cover helped tie together his neat half hour set quite well.

Main support came from Alice Skye. A singer-songwriter based out of Melbourne, the Wergaia woman beautifully crafted her set as she shyly poured her heart out on stage. Confessing that most of her songs come about as a result of relationships, whether good or bad, Alice played as part of a three-piece. Her set included tracks “Everything Is Great” and “Miss You”, as well as the two most responsive songs, the introspective “Look Inside” (a track that came about as a result of Alice’s constant wondering about mental health and not wanting people to ever see her browser history) and probably her biggest song, the lovely and heartbreaking “Friends With Feelings”. Alice’s shyness and awkwardness would warm even the deepest cockles of your soul. She was great.

2018 has been a busy year for Stella Donnelly; countless overseas tours, fantastic co-headline national tours (namely with Alex The Astronaut) and seemingly making some really great friends would definitely leave me out of breath come December. Playing to the Sydney crowd, the Western Australian act split her set into three distinct parts.

Part one began solely with her, her guitars and some fairy lights wrapped around her microphone stand. Opening up with the fantastic “Grey”, Stella moved into “You Owe Me”, a track about a super creepy former boss who apart from owing her money, also seemed like a total flog.

Up next was “Beware Of The Dogs”, a track Stella informed the crowd of sort of, kind of, definitely being about politicians (‘because you know not all politicians are dogs, and not all dogs are politicians’). Her most well known and respected song, “Boys Will Be Boys”, followed. Taking the time to explain the origins of the song, as well as conversations that have followed surrounding the subject matter, “Boys Will Be Boys” will forever be a Stella Donnelly stand out moment.

Providing the most long winded intro to a song in recent memory, Stella played “Political Songstress”; a song mostly (definitely) about Pauline Hanson. Following this was part two of the set as she brought out multi-instrumentalist friend George Foster to support her on “Talking”, a track about trying to polish an absolute turd of a relationship.

Bringing out the rest of the band, the night really kicked into gear with the track ‘”Lunch”. Joking about being in the big smoke now, Stella made the point of saying they weren’t allowed to just fuck around on stage anymore, like they would in Perth.

Forcing the band to join in on the merriness of the season, all band members donned some Christmas paraphernalia for “Christmas Greetings”, a song about those dumb, racist relatives that seemingly seem to ruin everyone’s family gathering. Up next was the unexpected three-word-in-length harmonies provided by the band through out the glorious “Watching Telly”.

Going sans guitar and fully embracing the lead singer persona, Stella asked the crowd what she should do with her hands during the great “Bistro”. Following it up the Sharon Van Etten track “Every Time The Sun Comes Up”, the night entered its final stages as the band played “Old Man” and the truly great “Tricks”.

Thanking the band for coming on tour with her once more, Stella closed the night out solo with the tracks “Mechanical Bull” and a personal favourite “Mean To Me”.

Having seen Stella Donnelly four times now, she’s an act that you know will be great every time, and will only continue to get better. Her on stage banter is up there with the best, while her vocals and guitar slinging are also pretty bloody good. If you get the chance to see her live, definitely invest the time and money. She’s great; so too are her friends.

Stella Donnelly tours nationally with John Butler Trio and Missy Higgins throughout February 2019, whilst also performing at NYE On The Hill and Mountain Sounds. She’s also announced a massive North American tour in March/April. For all the details head HERE.