Spilt Milk Festival in Canberra is really establishing itself as one of Australia’s biggest one day festivals. Now in its third year, even the late withdrawal of international star Childish Gambino didn’t for one second detract from the magic of the day.

Childish Gambino’s broken foot led to the inclusion of Aussie favourites Angus and Julia Stone and Golden Features, who has been relatively scarce on the festival scene over the last few years working on his Sect project. But, this year Spilt Milk was the festival of celebrating new albums, with Rl Grime, Skegss, Golden Features, The Wombats, Willaris K, Jack River and Rolling Blackouts Coastal Fever all showcasing albums that have been released this year.

Jack River was up early, but a big crowd made the effort to cut short their pres to come see her. A huge stage presence and adoring fans meant poppy singalongs “Ballroom”, “Fools Gold” and “Fault Line” were heart warming and lively. At the moment Jack River is the perfect mood boosting act for those early in the day time slots, but in a few years I can definitely see her headlining festivals round the country and taking her left-of-field pop internationally.

Festival must sees Skegss made me proud on Saturday. A Skegss show is so much cleaner and fuller than it was even a few months ago. Their set list was the perfect blend of classic songs like “LSD” and “Mustang” and their new summery tunes like “Smogged out” and “Up In The Clouds”.

After having to drag myself away from Skegss, it was a sprint to the Basquiat stage (through the not ideal Spilt Milk set up) to see shining stars Cub Sport. Another group that has come so far in a few years, four piece Cub Sport are absolute showstoppers on stage. Lead singer Tim Belson has an unmatched aura on stage and mesmerising nature. “Chasin” and “Come On Mess Me Up” were the obvious standouts, but it was nice to see other tracks like “Good Guys Go” getting a great crowd reaction. Their newest single “Sometimes”, their most electro-pop song, closed off the glamorous set with some huge finale energy. Cub Sport shows are one huge celebration and set the mood beautifully for the rest of the night. 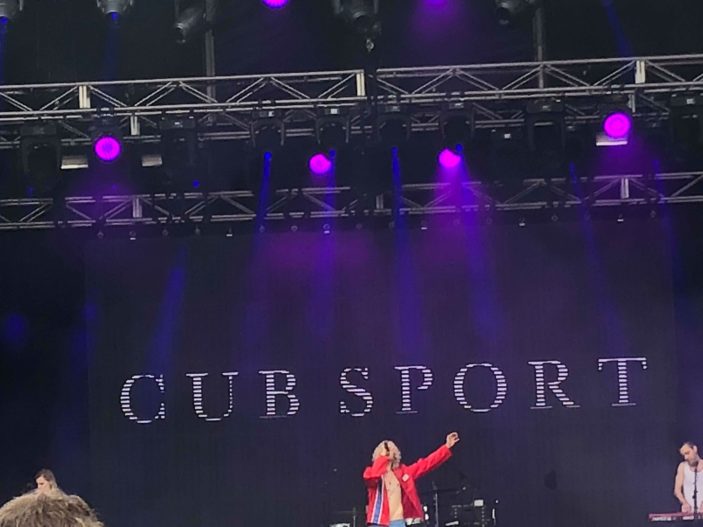 There was a huge change of vibes as Willaris. K took the stage for a dark electro set. I must admit I was skeptical of how his deep, ambient sound would go down in broad daylight and with a crowd filled with people pumped after the Cub Sport set. Take a look at his instagram to see how powerful his sets can be, with a great light show and even a dance group (not tacky background dancers if that’s what you’re imagining.) However, I was pleasantly proved wrong. Even in broad daylight Willaris. K put on a moody and exciting show, which the unsuspecting crowd were entirely engrossed in.

I love The Jungle Giants as much as the next person, and with a huge catalogue of great songs this should have been a great set. With only an hour to play I thought they picked an interesting setlist… songs like “Blinded” and “Quiet Ferocity” work well in longer sets, but in festival sets higher energy singalongs tend to work better. When they did play their party starting songs like “On Your Way Down” and my all time favourite “I Am What You Want Me To Be” they were as brilliant as I know they can be. Their live shows also really showcase their unique instrumentation and all the different aspects that go in to creating that groovy Jungle Giants sound.

Unlike Willaris. K, Golden Features didn’t manage to translate his eery and deep sound in to a daylight festival setting. The late addition of Golden Features to the lineup meant he didn’t have time to bring his incredible Sect show to Canberra and instead opted to play a DJ set. His Field Day set and his Sect tour shows earlier this year blew me away so my expectations were ridiculously high. If I hadn’t seen him play before I probably would have loved it. However, his whole show is based around creating an atmosphere, which unfortunately just wasn’t that effective in the day time. The new album was well received but older tracks like “Wolfie”, “Telescope” and “Guillotine” were spinetingling! Golden Features has been known to play “Lazerbeams” by tech house artist, Green Velvet in all his sets. As usual this went absolutely off, and if you don’t know this track just give it a listen and try and imagine yourself listening to it at night with a million lazer beams flying from the stage.

Set time clashes got the better of me here and unfortunately I had to miss Angus and Julia Stone much to my regret, instead I headed off to see Hayden James. The crowd was waiting out for newer tracks “Numb” and “Just Friends”, which ended up being feel good singalongs as the sun set over Canberra. A quick pit stop at the smaller stage to see Canberra boy Blanke serve up some some bangers never goes astray either. Last year at Spilt Milk I saw Blanke play at the same time as Lorde and Alison Wonderland to a crowd of max thirty people, all of whom probably just wound up there by accident. This weekend the tent was packed and with a huge year of releases Blanke has really proved himself as a producer more than just a DJ.

If you have never seen Indie Rockers The Wombats live then you really need to get your priorities straight. They are the first reason I started listening to the sort of music I now love, so seeing them live always fills me with a warm nostalgic buzz. Despite this personal bias I don’t think anyone could have been disappointed by this set. It was by far the best I’d ever seen them play, and unfortunately the hour flew by, leaving me almost in tears when it was over. I have never seen a crowd echo every word, to every song so passionately, and the vibrance and energy of The Wombats was radiating. They opened with “Cheetah Tongue” from their most recent album and the atmosphere and excitement in the crowd didn’t drop for one second. Classics “Moving To New York”, “Greek Tragedy” and “Tokyo: Vampires and Wolves” were electric. An hour set always leaves you wanting more, and there were plenty of songs like “Lethal Combination”, and lots of tracks off the other albums that are fabulous live, that didn’t make the setlist. Even after releasing an album this year, The Wombats have recently released two new tracks: “Bee Sting” and “Oceans”. This was the first time I’d heard “Bee Sting” live, and it had fists being passionately pumping in sync throughout the crowd, despite it being a relatively chill track for The Wombats.

My irrational fear of nothing ever being as good as The Wombats set and always being disappointed by the following sets was quickly demolished. Sorry to all the homegrown acts but influential trap god and trend setter RL Grime won the night. Playing some huge future bass tracks, timeless sing alongs and the best up and coming hip hop and electronic tracks RL Grime has been a leading force in the rise of trap music and an ambassador for making sure it stays relevant. Back in July he released his new album Nova, which he explained was created with the goal of being able to play the album live from start to finish. The album is excellently crafted with huge unexpected baseline drops and addictive feelsy electro-pop. Make sure to give the album a listen in full and listen more than once as it just keeps getting better.

Industry superstar Diplo explained that even if the album isn’t hugely successful now, Rl Grime is a trendsetter and the the album will not age. The “Pressure” and “Feel Free” drops were welcomed by “OHHHHHHHHS” as the driving bass is just so sharp and powerful. Classic party banger “Core” was as filthy as you’d expect, with the whole crowd humming along to the drop as if they were lyrics. Something I’ve always admired about RL Grime which he again proved true, is his ability to play the hardest dirtiest sets and still appeal to people who would never normally listen to trap music. Closing with sweet singalong “I Wanna Know”, he had friends hugging as they came to terms with the realisation it was all over. As the song came to an end he shook us one more time, playing new young producer Odea’s remix of “I Wanna Know” and it was genuine chaos. 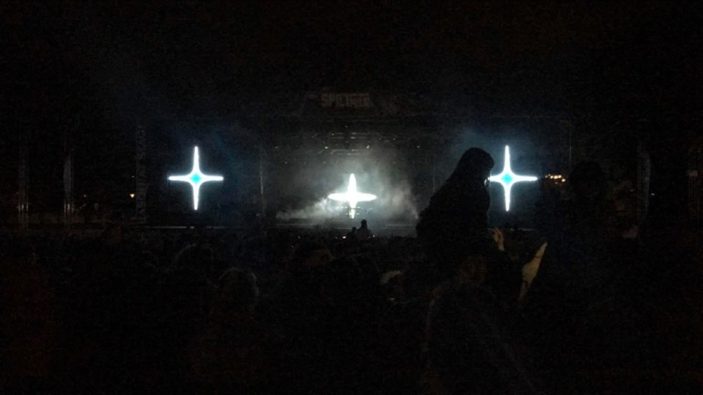 With the release of Nova, RL Grime has put together such a captivating light show and visuals to match the epicness of the album. To top it all off the fireworks from Peking Duk’s set on the other stage went off exactly as Rl Grime’s set ended. This was an extra element to add to what was already a euphoric moment. The crowd was silenced for a moment before a huge applause came for RL Grime, most of us still in awe of that this absolute legend is in front of us in little old Canberra.

Narrow walkways and quite a long distance between stages was my main first world problem of the day, but apart from this Spilt Milk was well organised. They covered the Childish Gambino incident as well as possible, and it’s so great to see huge international acts coming to visit Canberra and playing alongside some great homegrown local acts.