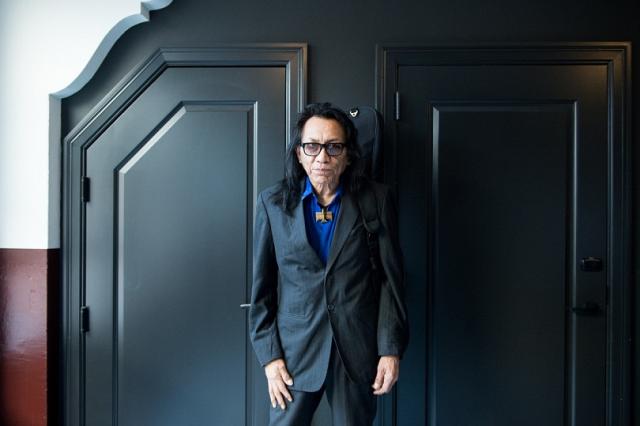 Thursday night saw the legendary singer-songwriter Rodriguez play the first of three sold-out shows in Perth’s picturesque Kings Park, and his first show in Perth since 1981. Joining Rodriguez on the bill was a host of Australian talent, including Archie Roach, Little May and Perth’s own Fox Cat Rabbit.

Local band Fox Cat Rabbit kicked off proceedings; playing to those early arrivals hoping to lay claim to some prime location on the green. The two-piece kept things simple; with an acoustic guitar and kick-drum the only accompaniment to the duo’s beautiful harmonies. The band’s whimsical folky sound proved to the perfect soundtrack to some late afternoon sunshine.

Sydney’s Little May were next up and impressed the ever-growing crowd with their three-part harmonies and indie-folk sound. Unlike Fox Cat Rabbit there was very little chatter between songs, instead the band worked steadily through a set that really showed off the quality and richness of the band’s vocals.

The final support of the night was Archie Roach, a legend in his own right. Backed on guitar by Craig Pilkington, Roach put on a captivating performance, providing lengthy introductions and anecdotes between songs. Vocally Roach seemed to be struggling a little in the opening numbers, but he eased into the set well, and was in fine voice soon enough. A beautiful performance of “Down City Streets” was a particular highlight.

The appearance of Rodriguez on stage – with the help of his daughter and grandsons – signalled thunderous applause from the now capacity crowd and the first of many “I love you Rodriguez” for the night. Backed by a band comprised of New Zealand and Australian musicians (Brett Adams, Maree Thorn and Pete Wilkins) Rodriguez launched straight into a raucous psychedelic rendition of the Jefferson Airplane’s “Somebody to Love” anyone expecting Sugar Man right from the outset would have to wait.

“Somebody to Love” proved to be the first of numerous covers over the course of the performance. Covers of Lou Rawls’ “Dead End Street” and “Lucille” by Little Richard followed, before we were treated to an exquisite rendition of Sugar Man, a sure fire crowd favourite. The next song “I Wonder” also unsurprisingly proved popular with the crowd. “Crucify Your Mind” and “Establishment Blues” were also amongst the evenings many highlights; the latter being possibly my favourite song of the night. Each new song, whether it be from Rodriguez’s two albums, or a cover song, was received warmly and enthusiastically from the Perth crowd, and even the sudden downpour of rain midway through the set did little to diminish the crowd’s enthusiasm.

Some of the cover songs proved to be interesting, and despite the few overheard grumbles from the odd audience member on the way out, they seemed to be taken in the right spirit by the crowd. The two covers that stood out the most for me were a fine rendition of the country standard “Sea of Heartbreak” and lovely countrified version of “Fever”.

There wasn’t much in the way of bantwr between songs, though what little there was, for me highlighted both Rodriguez’s wit and his humility. He genuinely seemed appreciative of his audience, and whilst he may have started to look outwardly frail, largely due to the onset of glaucoma, he proved that he’s still more than capable of entertaining and charming sold-out crowds – an ordinary legend indeed.